Should Tent Encampment At MacArthur Square Have Bathrooms?

It's become a hotly-debated issue at City Hall as number of tents grows. 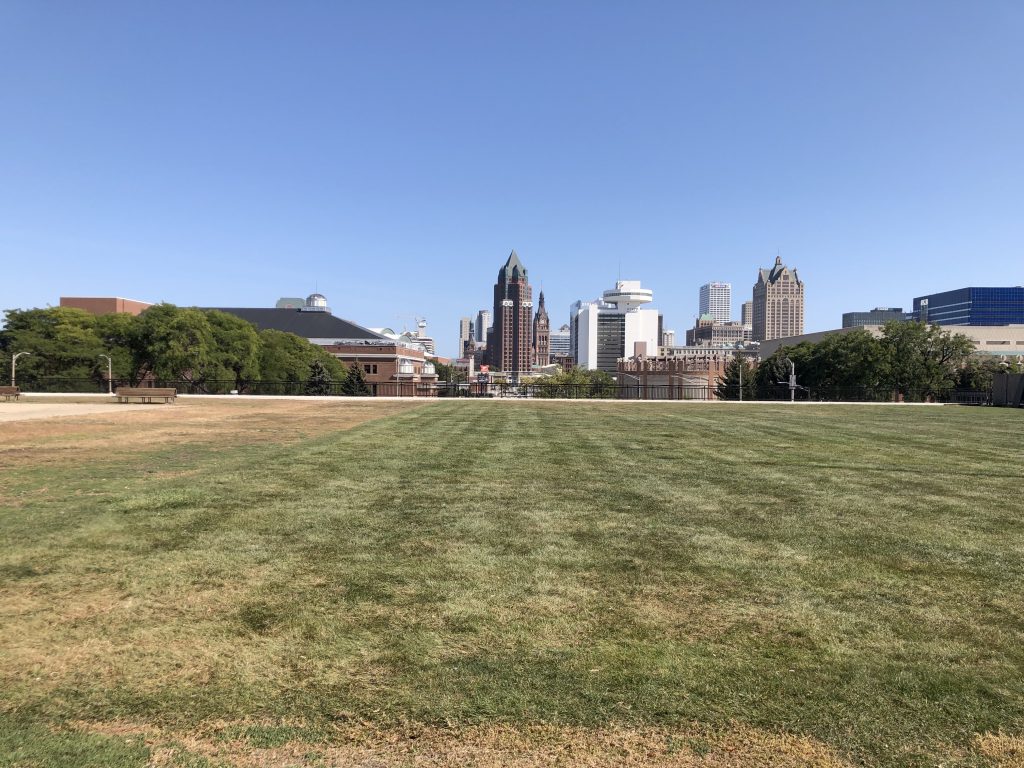 Looking east from MacArthur Square Plaza in 2021, City Hall is the background. Photo by Jeramey Jannene.

Establishing a place for the residents of a downtown tent encampment to use a bathroom has become a complicated issue at City Hall.

This week, two committees spent several hours debating the how, where, when and why to place a portable toilet at MacArthur Square, a city-owned park atop a parking structure in front of the Milwaukee County Courthouse. While they debated, the group looking to place the portable toilets reported that the number of tents at the plaza had grown from 37 to 40.

“This is a public health hazard to allow people to continue to defecate in the park,” said Sherrie Tussler, Hunger Task Force (HTF) executive director, on Wednesday to the Public Works Committee.

By the time the debate was over Thursday, Mayor Cavalier Johnson‘s office agreed to allow portable toilets for 30 days. But Tussler was already expressing skepticism.

“I don’t think it’s going to be long enough for our friends at the county to get everyone housed, so I think there’s going to be a crisis in 30 days,” she said. Street Angels, a homeless outreach nonprofit, said there weren’t enough beds available to get people housed.

HTF previously paid for two portable toilets to be placed in the plaza. Tussler said her organization was already visiting the plaza daily to provide water, food and sign people up for FoodShare. “In this case, for us, it’s a matter of equity,” she said of adding a place for people to go to the bathroom.

Tussler said individuals are reluctant to go far because they would risk having their belongings stolen. She said HTF paid for toilets at the prior “Tent City” under Interstate 794, which ultimately provided residents dignity and saved taxpayers tens of thousands of dollars in “toxic waste” cleanup costs.

Get a daily rundown of the top stories on Urban Milwaukee
But by the end of October, city administration officials became aware of the MacArthur Square toilets and had them removed, then instructed HTF to apply for a special event permit. The Department of Public Works (DPW) then denied the permit, triggering an HTF appeal to the council.

The Public Works Committee, led by downtown alderman Robert Bauman, spent a substantial amount of time Wednesday debating if that was the appropriate permit, and, if it was, how long it should be granted for.

Seeking more information, the committee punted on a decision until Thursday’s meeting of the Public Safety & Health Committee.

DPW Commissioner Jerrel Kruschke cited several issues in why his department denied the permit request, ranging from structural concerns to procedural issues. He said the plaza is technically a roof of the parking structure with supports capable of carrying 10,000 pounds, something that trucks servicing the toilets would exceed. “It could be a catastrophe if there was a vehicle on top of there unpermitted and the roof collapsed,” said the engineer.

In addition, Kruschke said HTF’s permit request was submitted on Oct. 28 and requested immediate placement through Nov. 15. The ordinance, he said, calls for a DPW to be given one week to review the request.

Finally, starting in January, new accessible access points will be installed on the elevated plaza, resulting in its temporary closure.

“With all due respect, it would have been nice to have heard this yesterday,” said Bauman on Thursday. “Because what you have said is this appeal is moot… we will not be having another hearing on this because the appeal is moot.”

But public safety committee chair Alderwoman JoCasta Zamarripa said one might not be needed anyway, the mayor’s office had worked late into the night on a compromise. She said any paperwork issues could be addressed.

“I’m not trying to be a softy here. People are pooping and peeing on the ground. It’s a problem,” she said.

Johnson’s chief of staff Jim Bohl said the mayor had concerns about making it easier for people to live outside, deterring a Housing First approach to end homelessness that strives to get people a safe place to live as a means of creating stability. He also expressed frustration about how the toilets arrived in the first place, and said city officials were told they were for a construction project.

“It was done under false pretenses and afterward a story was made up that was not factually accurate,” said Bohl.

But, nevertheless, the mayor’s office supported a compromise. It would issue a special event permit and take the issue out of the council’s hands.

“If people do not leave after 30 days, the administration will not support any continuation,” said Bohl.

But Bauman expressed caution. “Be careful of doing this through a shortcut,” he said, noting it would establish a precedent.

“The reality is the administration is viewing this as a one off,” said Bohl.

But another challenge looms, where to put the toilets? Bauman noted that the land around the plaza is county-owned, taking it out of city control.

“We will do a structural analysis right away no matter where this goes,” pledged Kruschke.

Eric Collins-Dyke, Milwaukee County’s assistant administrator of supportive housing and homeless services, said it would be his entity’s “main focus” to get those in tents into housing. “We will do our best to get as many people in as we can,” he said. “This is an emergency. It was 10 degrees earlier this morning.”

The MacArthur Square tent encampment has quietly grown in recent years, as has one at King Park. Neither is as visible as the larger camp that was under the Marquette Interchange until its 2019 replacement by a green infrastructure project.

The county provides direct services including case management and moving assistance. Collins-Dyke said when permanent housing can be offered, it is widely accepted. But he said it normally takes time to develop trust with those living in tents, and that offers of often-communal transitional housing can be refused. The county and city both participate in the Milwaukee Continuum of Care to coordinate resources.

Street Angels co-executive directors Eva Welch and Shelly Sarasin briefed the committee on their efforts, and what they said are misunderstandings of what their organization does.

Welch said the organization does provide tents and other supplies, but that individuals also must be working to address their situation by calling IMPACT 211 or engaging other services. “There is some technique to what we are doing,” said Welch.

“We are not the ‘Oprahs’ of the street,” said Sarasin, referencing the former television host’s surprise giveaway of cars to everyone in her audience.

While fighting back tears, Welch said criticism that their work only encourages people to remain on the street has “hurt.” She welcomed council members to take a ride-along.

“It’s heavy. The work we do is already heavy,” she said.

“People stay outside a long time because it takes a long time to get help,” said Sarasin. A fact Collins-Dyke admitted and said was a gap in the system.

Welch said they would gladly give up the job. “Honestly, Shelly and I don’t want to be homeless outreach workers. We hope that the city can put us out of business,” she said.

2 thoughts on “City Hall: Should Tent Encampment At MacArthur Square Have Bathrooms?”