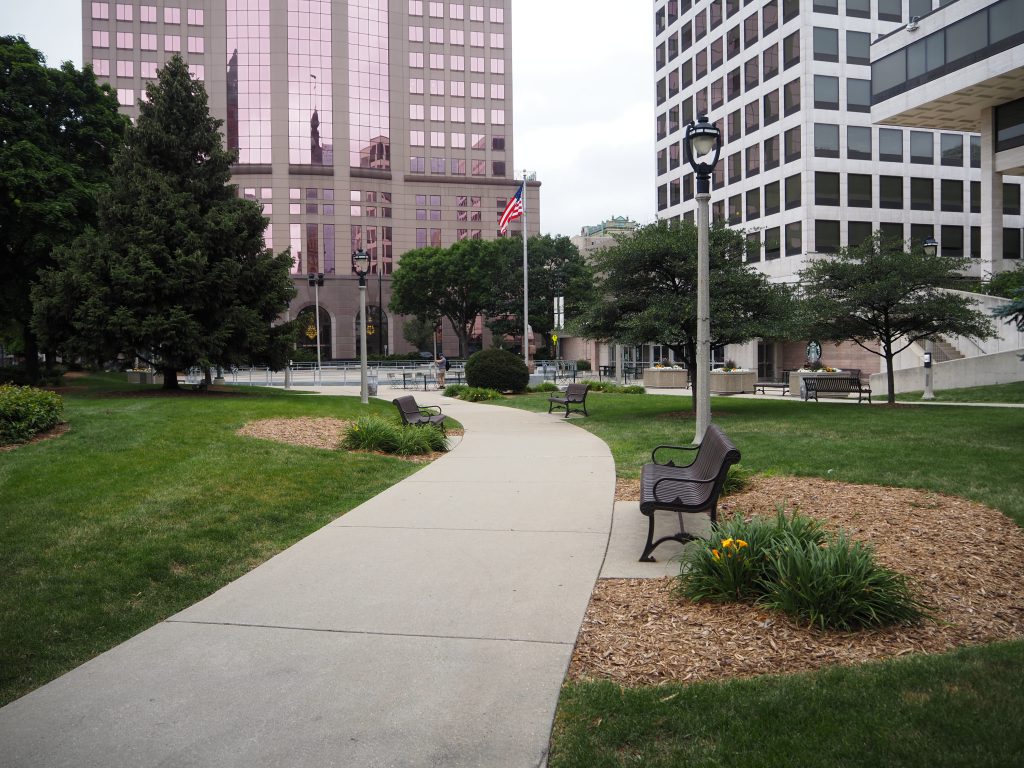 The proposal to use the ice skating rink in Red Arrow Park for roller skating in the summer was killed for this year because of concerns the county has no money to pay for a protective surface to avoid damage to the concrete. But is that protection necessary?

Supervisor Ryan Clancy told the board during the debate that roller skaters in Milwaukee advocating for the rink don’t actually want a protective surface at Red Arrow Park, nor do they think it’s necessary.

Indeed, Terrance Clarke, who runs Roll Train along with Ellen Fine, told Urban Milwaukee that he and others have been trying to get approval to roller skate in Red Arrow Park for years, having first approached parks at least a decade ago, and that the existing rink doesn’t need a protective barrier.

He said he’s been repeatedly told there is a concern that roller skating could damage the ice rink. “How is that possible, you run a zamboni on it during the winter time,” Clarke told Urban Milwaukee in an interview.

The parks department’s initial study of the proposal this year also raised concerns about protecting the ice rink cooling infrastructure and the possibility of surface stains that would need to be cleaned off lest they affect creation of an ice sheet. The 9,000 square foot rink was built in 1999, it generates revenue annually for parks and would be an incredibly expensive asset to fix or replace. So the parks department is protective of it and has also rejected past requests to use the rink for dancing and mini golf.

In a 2020 email obtained by Urban Milwaukee, Lindsay Frost, engagement manager with parks, told Fine of Roll Train, “I talked with our operations team and I am told the cooling coils are right below the surface of the concrete and were not designed in a way to sustain impact without coverage of ice.” In another email, a year later, Jeremy Lucas, parks director of administration and planning, told Clancy, “My understanding is that we do not utilize the ice rink for other purposes due to the fragility of the ice rink coils. They are reportedly just below the surface of the concrete and very susceptible to damage.”

Get a daily rundown of the top stories on Urban Milwaukee
In March of this year, Clarke reached out to the contractor that installed the ice rink in Red Arrow Park, Commercial Refrigeration Systems of Virginia, Minn. In an email, the firm told Clarke, “The concrete surface on ice rink floors is very durable and can be used for various dry floor activities. Roller skating and rollerblading are one of those activities. There obviously would be no concern for the weight of the skaters as it’s a typical loading for these types of systems. It has been our experience that the surface of the concrete holds up very well under this activity.”

Commercial Refrigeration also offered examples of Ice Rinks it had built that are also used during summer months. One of them, the Guidant John Rose Oval in Roseville, Minn. also offers inline skating during the summer. It was installed by the firm in the early 1990’s. Another, the St. Louis Recreation Outdoor Center is covered with turf in the spring, and the dry concrete is used in the summer for weddings, parties and community events.

Once again, parks and the roller skaters are in disagreement, or at the very least talking past one another. Clarke told Urban Milwaukee, “Roller skates don’t do stains, these are urethane wheels, they’re soft wheels, there’s nothing hard about them at all.”

It’s possible that some of the concerns, and different sets of information from the skaters and parks could have been reconciled if the county board didn’t rush through a funding resolution ignoring the county’s typical process for public works projects and their own committee process. “Usually the idea would be vetted through the department, who’s making a recommendation, and then it goes through a planning process where you’d engage a design consultant and engineers and all that,” Tarantino said. Instead the board skipped this process, with the result that there will be no roller rink this summer

The years of attempts to get that process to work in their favor has left Clarke increasingly dismayed. He told Urban Milwaukee, “I started to think this was a racial issue more than anything else, because a lot of Hispanic people, Black people and people of color roller skate but don’t ice skate.” Skating would be a safe and healthy activity and help create a more “vibrant atmosphere” for downtown Milwaukee, Clarke said, which doesn’t have many options for recreation that don’t involve drinking.

Parks has very few staff to maintain the entire parks system, which it has an obligation to do, Tarantino said, so it considers projects in view of the resources available to the entire system. “We do not have the staff or the resources to monitor roller skating to make sure that folks are not causing damage from residue on the rink surface… This is why a platform type surface was explored.”

At the start of this latest round of advocacy for a downtown roller rink, which began some time in 2020, Tarantino noted that, “it was a first blush reaction that, we can’t really take on anything new when we struggle to maintain what we have. That’s still true, but now we also know the concerns with creating the ice and the risk to the slice of ice operation just far outweighs the potential to do it.”

But the dream isn’t dead. County Executive David Crowley, who vetoed the roller rink proposal, also encouraged supervisors to pursue thr project in the 2023 budget, and the parks department hasn’t given up on the idea, either.

Tarantino said the department has been meeting with the Downtown Business Improvement District about possible limited-run roller skating programs at the rink: “A smaller scale, maybe weekend-long, rather than season long event.”