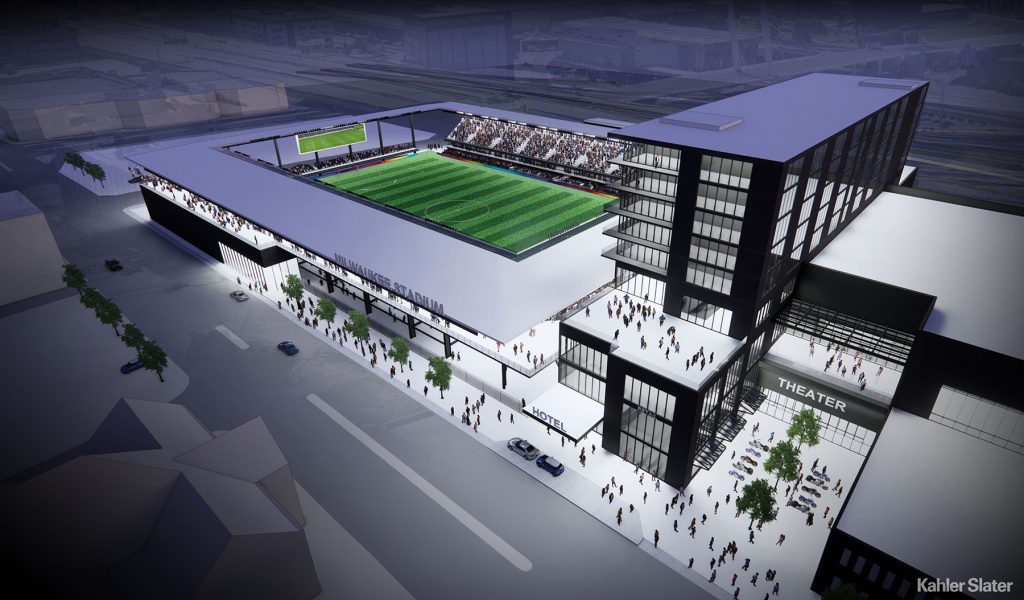 How bad does Milwaukee want a professional soccer team?

This is the question policymakers should ask taxpayers in the coming years, should a planned $160 million mixed-use development, centered around a downtown soccer stadium, move forward.

The proposal, as it currently exists, calls for an 8,000-square-foot concert stadium, concert hall with a capacity of 3,500, an apartment complex and a hotel.

As Urban Milwaukee has reported, the partners behind the project, dubbed the Iron District, have already confirmed that it will need public financing to move forward. What’s more, they’re already starting to hint at the classic justification for public money being funneled into privately-owned sports projects: economic development.

The developers pointed to the Milwaukee Bucks Fiserv Forum and Deer District development, and intimated that it was a model of the type of “significant impact” their project could have on the city. “It’s going to surprise Milwaukee,” said Jim Kacmarcik, the CEO of Kapco Metal Stamping and Kacmarcik Enterprises and a leader in the stadium project.

Well, Milwaukeeans wouldn’t be the only ones surprised by a sports-related development, buoyed with public funding, being an economic success for the city. Academic economists almost universally agree that sports projects do not generate new jobs or income for a city. In fact, the only economists one can generally find that will say this are the economic consultants paid to produce economic impact studies, usually by the developers themselves. This was observed in a 2008 paper published by Econ Journal Watch that reviewed research on public subsidies for sports franchises and found that academics and consultants regularly arrive at “opposite conclusions” about these projects ability to deliver jobs and new income.

Given that public financing for private sports franchises has become increasingly common, and the proposed Iron District will need it to move forward, a think-tank affiliated with the University of Wisconsin-Madison, called COWS (the Center on Wisconsin Strategy) is looking into what kind of benefit Milwaukee could expect from a publicly-financed private-sports arena.

The report relies on two studies that show the majority of economists agree that sports projects do not actually provide the benefits touted by developers and the report lays out five soccer stadium projects across the U.S. in the last five years, which together have received $500 million in public money.

One of the projects held up by the Iron District developers, the new stadium in Louisville, KY, saw the city borrow $30 million and the creation of a $21.7 million Tax Incremental Financing (TIF) district for the project.

The report is part of the “EARN in the Midwest” project which is a collaboration between COWS, the Milwaukee Area Service and Hospitality Labor Organization (MASH) and Kids Forward. MASH is the union representing service industry workers at Fiserv Forum. Given that little economic impact comes from these projects, they argue, Milwaukee policy makers should look at what kind of benefits they can gain for the community if they consider financing the project.

The community benefits agreement that was part of the Bucks arena deal, which included a wage floor and card check union representation (by MASH), is held up as a potential model. This agreement was a condition imposed by Democratic state legislators to win their support for state financing for the deal.

Publicly subsidized sports stadiums are not not a new phenomena, but publicly subsidized sports stadiums owned by private, for-profit entities are, according to one of the papers cited in the COWS report. That paper, the same one that found the discrepancy between academic economists and consultants, reviewed decades of scholarship on public subsidies for sports and concluded, “The evidence… is that sports subsidies cannot be justified on the grounds of local economic development, income growth or job creation, those arguments most frequently used by subsidy advocates.”

Get a daily rundown of the top stories on Urban Milwaukee
The COWS report cites a similar short report by the Federal Reserve Bank of St. Louis summarizing the research on public subsidies for sports stadiums. It quotes the research of Temple University Professor and sports economist Michael Leeds which posits that the average professional baseball team “has about the same impact on a community as a midsize department store.”

Leeds research estimated that every single professional sports team in Chicago could disappear tomorrow and the economic impact on the city would be “a fraction of 1 percent,” the fed paper notes.

These are the substitution effect, and leakage.

First, the substitution effect. “Sports are a form of entertainment,” Rosen said. “People spending money on soccer are people who are not gonna be going to the theater or restaurants or purchase other forms of entertainment.” Meaning soccer fans would have spent the money anyway, but on other kinds of entertainment.

Second, is leakage. This one may apply less to a minor-league soccer team than a professional basketball team like the Bucks. But, as Rosen pointed out, when the economic impact of sports teams are calculated, the high salaries of professional athletes are part of that figure. But rarely do professional athletes live and spend their money in the communities that subsidize the arena they play in. And any profits generated for ownership are also unlikely to be spent in the communities that subsidized their sports franchise. So most of that public subsidy leaks out of the community and into private hands.

“Given this reality,” Rosen said, “I think the demand for community benefits is critically important.”

If public officials are looking for projects to stimulate growth, they should look to infrastructure and education, according to the St. Louis Fed paper. But that’s not what developers are bringing them in this case.

The gist of the report is that, given that any promises of jobs and economic activity are destined to ring hollow, officials should instead ask two questions: How bad does Milwaukee want a soccer team? And what can we get out of it for the people in this community?

More about the Iron District