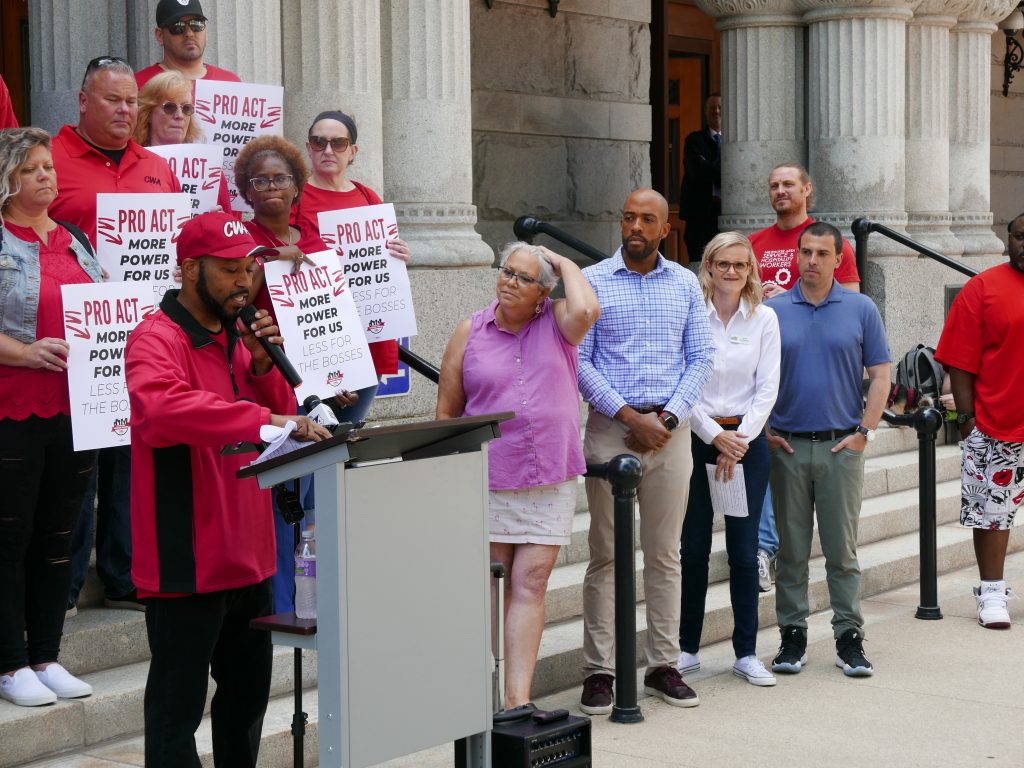 Union members and most of the Democratic candidates running for U.S. Senate in Wisconsin held a press conference outside of the Milwaukee Federal Courthouse Wednesday calling for passage of federal legislation that would expand protections for workers attempting to organize a union.

The building is also where Republican U.S. Sen. Ron Johnson’s Milwaukee office is located. Union members and senate candidates alike spoke in favor of the legislation called the PRO Act, and against Johnson who has vowed not to support it.

The legislation was passed by the U.S. House of Representatives in 2021 and has since languished in the U.S. Senate, as the legislation does not have the votes needed to overcome a Republican filibuster.

Clinton Rodgers, Communication Workers of America District 4 Staff Representative, hosted the event. He began by explaining that the PRO Act, among other things, would make it illegal for companies to replace striking workers and penalize companies for retaliation.

The legislation would also broaden the definitions of who can be represented by a union, allow unions to strike in solidarity with other unions (called secondary strikes), give unions the power to ignore state Right to Work laws which the federal law would preempt, make captive audience meetings for workers illegal (like those held by Colectivo during the recent union campaign there) and restrain an employer’s ability to retaliate against an employee participating in unionization activities.

“Ron Johnson says ‘No’; the only ‘No’ I know is that he’s no friend of ours; he is no friend of labor and quite frankly he has been a complete embarrassment to the State of Wisconsin,” Rodgers said.

He said the PRO Act was essential for labor unions and workers all across the country in the fights for unionization that are “happening every day.” Another worker, Justin Otto, who recently came through a unionization drive at Pabst Theater Group (PTG) in Milwaukee, said that despite overwhelming support for unionization the boss at PTG, Gary Witt, was not required to recognize the union until an election was held, and in meantime he communicated to his employees that he thought they should not support unionization.

“Pretty much any workers who want to form a union are gonna face these exact same obstacles because the law isn’t on the side of the union, it’s on the side of bosses,” Otto said. “We need the PRO Act so that workers who want to form a union can do it without their employer being able to control the timeline, and so that employers aren’t allowed to intimidate and threaten workers if they want a voice in their workplace.”

Troy Brewer, chief union steward and union president for workers at the Fiserv Forum organized with MASH, said, “I’m standing before you today in front of Sen. Ron Johnson’s office because I think he’s definitely one of the biggest clowns in office today.”

Brewer explained that he took it personally when Sen. Johnson supported cutting unemployment funding during the pandemic and supported overturning Roe v. Wade. “I’m taking it personal that he doesn’t care about the working class or essential workers; he only cares about big time corporations,” Brewer said. “I have to tell you it’s time for us to make it personal again for Ron Johnson.”

MASH President Peter Rickman said he wants Johnson to support the PRO Act. “The truth is I don’t care who’s in the senate so much as the senate is on the side of the working people.” Rickman’s union hasn’t endorsed in the Democratic primary race yet. “If [Johnson] won’t vote union yes on the PRO-Act we will put someone in the U.S. Senate for Wisconsin that will, whether it’s Mandela, Alex, Sarah or Tom,” Rickman said, the last name a reference to Tom Nelson, the Outagamie County Executive and senate candidate who did not attend this event.

The senate candidates have all expressed support for the PRO-Act and unions in the past.

The candidates talked about their family connections to unions Wednesday. For Barnes, both his parents were union members – his father as an autoworker and his mother as a public school teacher. Both of Godlweski’s parents were public school teachers and union members. Lasry said his father Marc Lasry, billionaire Milwaukee Bucks co-owner and managing partner of the hedge fund Avenue Capital, was an immigrant to the U.S. and used to work as a truck driver with the Teamsters. They also all took shots at Johnson.

Get a daily rundown of the top stories on Urban Milwaukee
Barnes said he fought against the state’s Right to Work law, passed in 2015, as a member of the state Assembly. “There’s state legislators, lawmakers all across the country that continue to disrespect working people, and that’s why Congress needs to step up and act,” he said “And if Ron Johnson can’t do the job I’ll do the job for him.”

Godlewski said that Act 10, the 2011 Wisconsin law which limited the collective bargaining rights of public sector employees, was a “gut punch to my family.” She said passing the PRO Act was a way to ensure “Scott Walker policies do not become the law of land.” She said the PRO Act would bring dignity back to working people.

Lasry, a Milwaukee Bucks executive, said the labor agreement with MASH at Fiserv Forum was an example of labor and management working together, with the Bucks organization voluntarily recognizing the union. “Those are the values that we’ve tried to use as we built Fiserv Forum… and it’s what we’re gonna make sure that we’re doing when we get it to the U.S. Senate., to make sure that we pass the PRO Act” 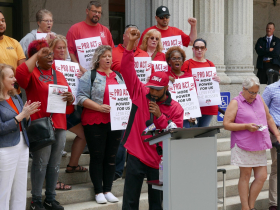 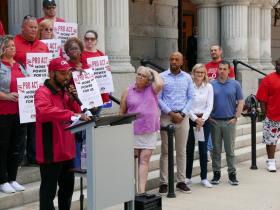 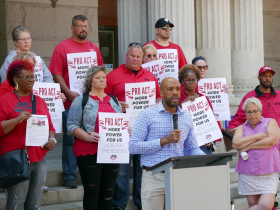 UPDATE: An earlier version of this article used an older job title for Rodgers. 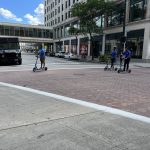