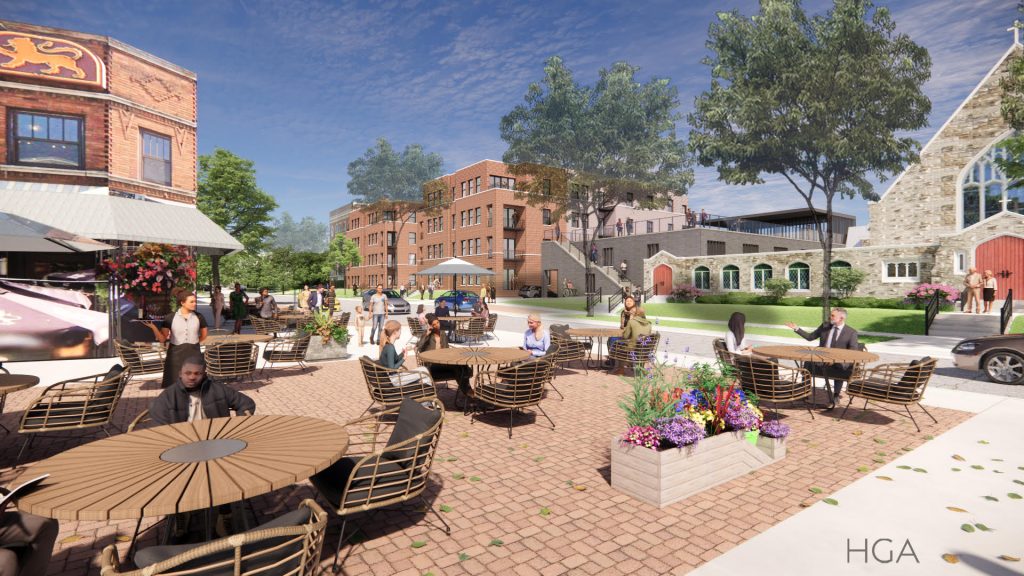 A new apartment building planned for a grass lot just off N. Downer Ave. is the linchpin of a proposal to save the 111-year-old St. Mark’s Episcopal Church and build a sustainable future for the congregation. But it’s being designed to look like it was there all along.

The church would sell developer Michael DeMichele a 30,000-square-foot lot, currently a mix of grass and surface parking, and in exchange, DeMichele would demolish the adjacent parish hall and rebuild a modern, accessible structure in its place.

Working with architect Jim Shields of HGA and general contractor Catalyst Construction, DeMichele intends to build a 55-unit apartment building and a replacement for the 1949 parish hall that would integrate with the historic church structure, 2604-2644 N. Hackett Ave. The new hall would be owned by the church, while an investment group led by DeMichele would own the apartment building.

“Several years ago, we as a vestry [church board] were looking at how much time and money was being put into maintaining the 1949 building,” said St. Mark’s senior warden (board president) Brooke Frizzell in an interview. “It was becoming a considerable drain on our financial resources and our energy as a parish.”

A traditional capital campaign to update the two-story structure, which lacks an elevator and is laden with asbestos among other issues, was determined not to be feasible. The 30,000-square-foot, two-story building was also determined to be oversized for the approximately 300-member congregation. So the East Side church pivoted to leveraging its land to land a new building.

“We are trying to be proactive and make sure we have a physical space that meets the needs of the parish and the community,” said Frizzell. “I hope people understand that this wasn’t hasty.” She noted that the strategy, in part, is designed to avoid the fate that befell the former St. James Episcopal Church. The congregation shuttered and the downtown church is now an event venue.

DeMichele was selected as developer for his familiarity with the area around N. Downer Ave. and E. Belleview Pl. He both lives nearby and owns the property occupied by Nehring’s Sendik’s. “We want to be good neighbors,” said Frizzell.

Get a daily rundown of the top stories on Urban Milwaukee
DeMichele, a trained architect, expressed the same view.

The market-rate apartment building would be a U-shaped building with an interior courtyard and a brick facade. The units would be a mix of studio, one and two bedroom floor plans. The top floor would be recessed. A 55-stall parking structure would be included underground.

“We’re doing everything possible to provide the best solution in a historic district,” said DeMichele.

The proposal requires the approval of the Historic Preservation Commission and Common Council because it is being built in a historic district and requires a zoning change.

DeMichele said the higher density building is necessary to yield the revenue necessary to make the deal work. The property is currently zoned for multi-family housing, but needs a zoning change to accommodate the density proposed. The proposed building, approximately the same height as the adjacent three-story Church in the City, conforms with the zoning designation’s height limits.

“We really are trying to provide the right building on the street that goes with all the other buildings on the street,” said DeMichele.

It’s a block of 1910s brick buildings, including the Saint Regus and Georgetown condominium complexes as well as the structure that’s home to Cafe Hollander.

Shields, who lives a few blocks away, closely studied the brick of each before selecting his choice for the new buildings. The apartment building, similar to those a century older, would have a traditional red brick on its front facade as well as approximately 20-feet deep on each side. A lighter brick would be used deeper in the structure and along the alley, which Shields said was previously done to reflect more light. The bricks would be of the same height, but longer and machine made.

“I’ve been working on the apartments as if they were part of the historic fabric across the street,” said the architect.

The parish center would have a dark gray brick intended to match the black patina present on the stone masonry of the church. A hall and kitchen would be located on the first floor, which Frizzell said would be used for a variety of events.

The bride’s walk that connects the church with the 1949 structure would be maintained, as would the central courtyard and a large portion of the building’s foundation. But an exterior staircase would be added to the new one-story building to provide access to a rooftop space.

The church would lose the parking lot, but Frizzell said that wouldn’t be a loss noticed by most members or the neighborhood. It has approximately 15 spaces, but the average service draws 100 parishoners. Frizzell noted she is among many members who often arrive by other modes of transportation, including bicycles, buses and walking.

Shields and DeMichele have collaborated before, with the former serving as the architect and the latter as the owner’s representative, on the new Milwaukee Ballet building in the Historic Third Ward. “It really admires the lost masonry world of the Third Ward,” said Shields of that structure’s design.

DeMichele, a boutique developer, has executed a wide range of projects including the 88Nine Radio Milwaukee headquarters and the Dohmen Company headquarters (now Eversana offices). He also is a co-owner of Lupi & Iris restaurant. “My buildings tend to be special,” said the developer.

He hopes the latest building will be particularly desirable to nearby hospital workers and empty nesters who want to downsize, but stay in the neighborhood.

Public hearings on the proposal are expected to be held in the coming weeks. The area is without a Common Council representative following the resignation of Nik Kovac.

The developer and church hope to begin construction work this winter. 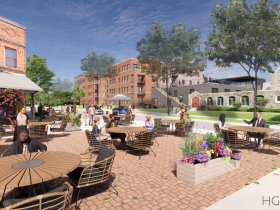 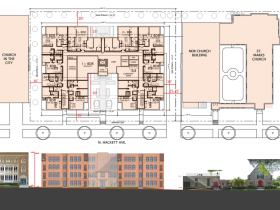 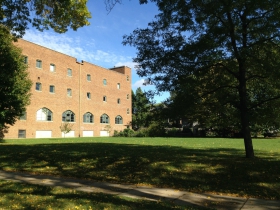 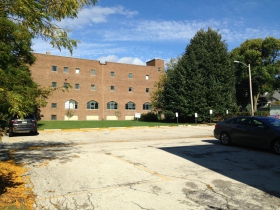 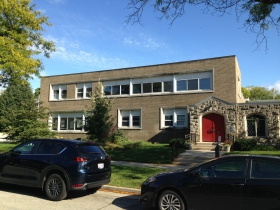 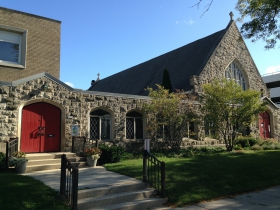 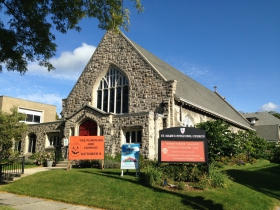 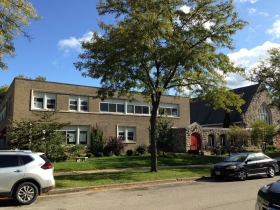