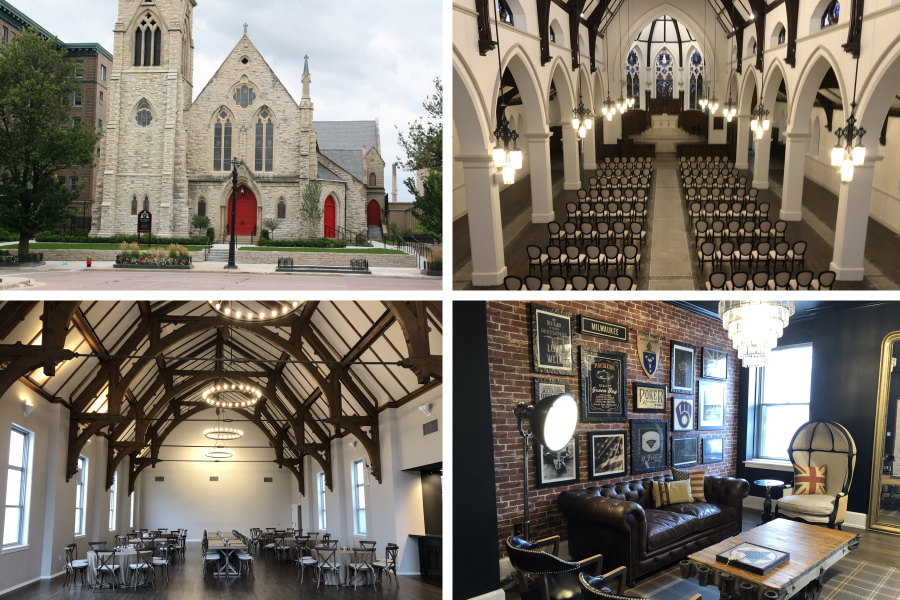 Milwaukee’s newest event venue is located in one of the city’s oldest buildings.

St. James 1868 is located in the former St. James Episcopal Church at 833 W. Wisconsin Ave. The name is a reference to when the building was built, just after the Civil War.

The church was one of many on what was then Grand Avenue and had a prestigious list of members, including business magnate Alexander Mitchell who lived in a mansion across the street (today’s Wisconsin Club). But by 2017 the congregation had dwindled to approximately 30 and maintenance costs in the building were escalating. A final service was held on November 1st, 2017.

While on vacation in Mexico, Crowle discovered the church was for sale back home in Milwaukee.

Crowle, who designed store layouts for Macy’s and then Kohl’s, said the church fit just what she was looking for and would stand out in the market. “There have been so many barn venues that have come up in the past 10 years, that it’s a post-peak trend,” Crowle told Urban Milwaukee during a tour of the space. She said the former church would offer an entirely different aesthetic.

She originally was going to partner with developer Joshua Jeffers, who would develop an apartment building on the site of the 1890s parish house at the rear of the property. But Jeffers ultimately dropped out of the deal, working to secure design approval from the Historic Preservation Commission to redevelop the attached structures before selling the property entirely to Crowle in July 2018. She raised approximately $2 million in equity, including federal and state historic preservation tax credits, to finance the development.

Crowle worked with Engberg Anderson Architects on the design for the complex, which would now include two event venues in historic spaces. The former sanctuary became The Abbey with a capacity of up to 300. The second-story of the parish house, once a gym, became The Hyde with a capacity of up to 150. Greenfire Management Services joined the project as the general contractor.

The partners worked to refine the design, which included creating an outdoor reception area on the east side of the sanctuary, a second-story open-air deck for The Hyde and retrofitting the building to include a series of amenities.

One of those new amenities was fully-accessible bathrooms, the lack of which Crowle said Father John Allen, the congregation’s minister, had told her was a persistent challenge. Crowle said she learned a lot from “Father John,” including the history of the stained glass in the sanctuary and a story about a now-famous Hollywood actor that got married at the church.

The wooden church pews in the sanctuary were removed, as Crowle’s focus is on providing a venue for receptions. But the pews are not entirely gone from the building. Portions have been repurposed into everything from tables to bar shelving.

Get a daily rundown of the top stories on Urban Milwaukee
The sanctuary, now known as The Abbey, can now host a ceremony and be quickly turned to accommodate a sit-down dinner. Even the bars in the space are mobile, affording Crowle the opportunity to see how the first events utilize the space.

One thing that’s become abundantly clear is where the dance floor should go:  the 1,600-square-foot chancel space, the elevated area on which the altar and other religious items were once installed. Crowle said because tables are not placed on it for dining and that it’s separated by an engraved wood railing, it becomes a natural space for guests to use for dancing.

The Hyde features the same flexibility, but has a built-in bar made largely from the remanents of the pews from the sanctuary.

Crowle used her interior-design eye to curate an English theme throughout both venues. This is most visible in the bride and groom suites, the former of which is fit for a queen, but the latter of which Crowle is particularly proud of. “I just think grooms get forgotten, so I made a room for them,” said Crowle, showing off a suite that includes the church’s altar that now functions as a bar.

One of the groom suites is known as “the Harrison” a reference to Harrison Ford who, according to Father John, married his first wife in the church. Perhaps that was back when Ford attended and then dropped out of Ripon College, where the future Hans Solo studied philosophy.

Crowle said her focus on customer service in her past career forms a natural bridge to operating an event venue. “The similarity is customer service,” said Crowle, noting she hopes vendors like the space as much as brides and grooms. “You want the vendors to be happy because you want them to recommend you.”

Gracious Events serves as the exclusive caterer for both venues. Crowle said the decision will yield a higher quality of service and less wear-and-tear on the building from equipment being hauled in and out. A commercial kitchen is located on the first floor of the parish house, adjacent to the newly-installed elevator.

While some elements of the large organ remain, the musical instrument will no longer function. The passageway for the pipes provided a logical spot for Greenfire and Engberg Anderson to install the elevator.

How has opening an event venue during a pandemic gone? “Everyone’s been understanding,” said Crowle. The first event was scheduled for May, but ultimately took place August 1st. Capacity limits have been cut in half and all guests are required to wear masks.

She said future bookings remain strong, with bookings stretching into 2022 at this point.

The spaces are rented on a flat-fee basis ranging from $4,000 to $9,900 depending on the venue selected and the length of the rental. Crowle said the structure avoids hosts having to worry about where to procure tables and chairs from and other services.

It’s not just weddings that Crowle is booking. She said the facility has also drawn interest for “celebration of life” receptions that follow a funeral. 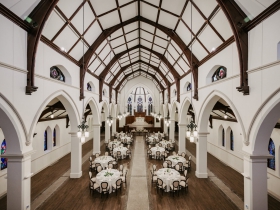 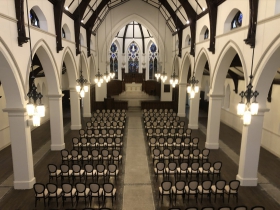 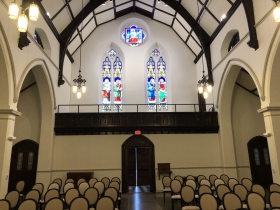 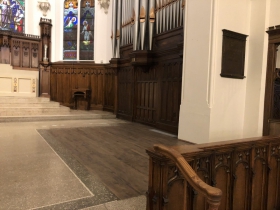 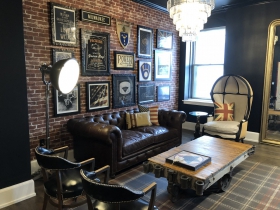 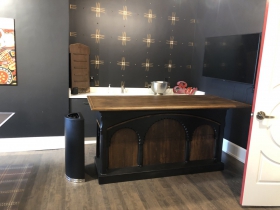 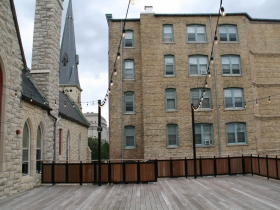 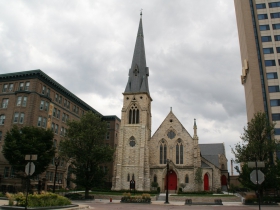 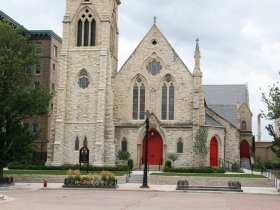 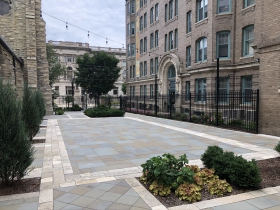 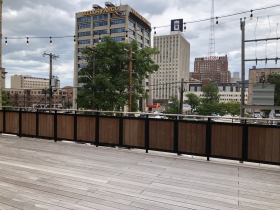 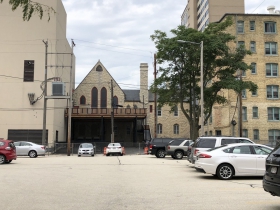 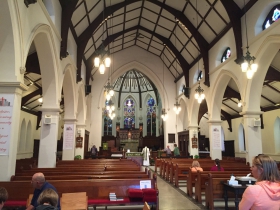 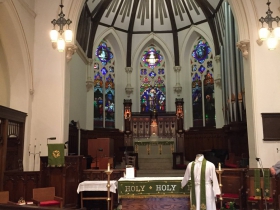 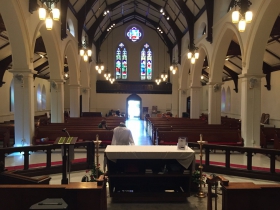 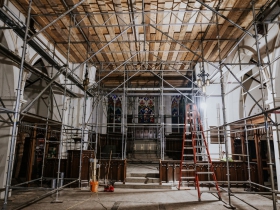 One thought on “Eyes on Milwaukee: Inside Milwaukee’s Newest Event Venue”