Breaks promise not to run for third term, citing 'loss of freedom' and 'tyrannical approach by the elites.'

By Laurel White, Wisconsin Public Radio - Jan 9th, 2022 01:08 pm
Get a daily rundown of the top stories on Urban Milwaukee 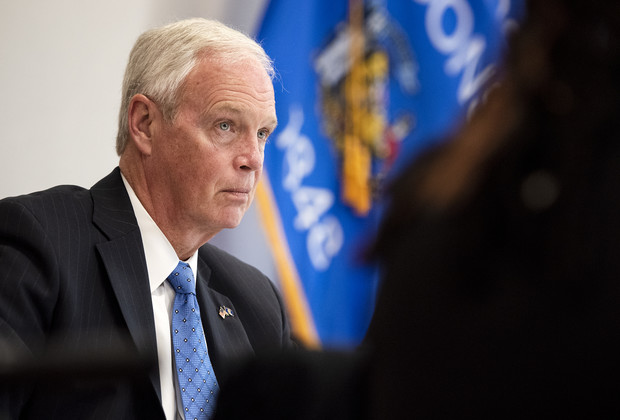 Sen. Ron Johnson sits with people from outside of Wisconsin who claim to have had adverse reactions to COVID-19 vaccines Monday, June 28, 2021, at the Milwaukee Federal Building in Milwaukee, Wis. Angela Major/WPR

The polarizing and often controversial senator’s decision to pursue another six-year term in Congress sets up what’s likely to be a high-spending race that grabs national attention. A dozen Democrats have already lined up to be his potential challenger, including Lt. Gov. Mandela Barnes.

In a Wall Street Journal editorial announcing his reelection bid, Johnson said his decision was not “made lightly” and was informed by a belief that “America is in peril.”

“Much as I’d like to ease into a quiet retirement, I don’t feel I should,” he wrote. “Countless people have encouraged me to run, saying they rely on me to be their voice, to speak plain and obvious truths other elected leaders shirk from expressing—truths the elite in government, mainstream media and Big Tech don’t want you to hear.”

“Having already experienced a growing level of vitriol and false attacks, I certainly don’t expect better treatment in the future,” Johnson added. “In order for my campaign to succeed, I will need the support of every Wisconsinite who values the truth and refuses to allow lies and distortions to prevail.”

The Cook Political Report, a national newsletter that analyzes elections, campaigns and political trends, lists the race as one of six U.S. Senate races across the country in 2022 with “toss up” status, rather than being inclined toward one party or another.

Johnson was first elected to the U.S. Senate in 2010, unseating longtime Democratic U.S. Sen. Russ Feingold. He also defeated a comeback challenge from Feingold in 2016. Johnson pledged ahead of his 2016 reelection that he wouldn’t seek more than two terms in the office, but has since walked back that commitment.

“What I didn’t realize in 2016 is that we would lose the House, that we basically lost the Senate, that we don’t have the White House … our nation hangs in the balance right here, and it’s also part of my decision factor,” he said at an event last summer.

Republicans lost control of the U.S. House of Representatives in the 2018 election and the U.S. Senate and presidency in 2020.

In Sunday’s editorial, Johnson said his 2016 commitment to not seek reelection “was my strong preference, and my wife’s,” but echoed his previous concerns about Democratic control in Washington.

“Neither of us anticipated the Democrats’ complete takeover of government and the disastrous policies they have already inflicted on America and the world, to say nothing of those they threaten to enact in the future,” he wrote. “Nor did we anticipate the pandemic, the government’s failed response to it, the loss of freedom that has resulted, and the tyrannical approach taken by the elites who have created and maintained a state of fear that allows them to exercise control over Americans’ lives.”

Despite lacking a formal election bid, Johnson posted strong fundraising numbers in July, raising $1.2 million in the first six months of the year, with about $1.7 million in the bank, according to Federal Election Commission documents.

Johnson initially campaigned, and has repeatedly sought to define himself in office, as a pragmatic Washington outsider and a businessperson with a sharp focus on economic issues. In 2016, he said his goals for his next term were bolstering homeland security and reducing government regulations on businesses.

“We’ve got to make sure the American economy recognizes its full potential,” Johnson said during his 2016 election night speech. “You do that by reducing the regulatory burden, coming up with a competitive tax system, utilizing your energy resources, keep(ing) our energy prices low. That’ll heal our economy, which will allow us to strengthen our military, defeat ISIS, and secure our border.”

However, Johnson has been far from a narrowly-focused politician. He has made headlines for his stances on a wide number of issues since arriving on the political scene, from coming to the defense of a major oil company after an oil spill to blaming sunspots for global warming.

Johnson, who had COVID-19 in October 2020, has questioned the efficacy of vaccinations and has been suspended from YouTube for violating its misinformation policy related to the virus. In early December, Johnson said gargling mouthwash could fight the virus, a claim that has been denied by health officials and the manufacturer of Listerine mouthwash.

From 2015 until January 2021, Johnson served as chair of the powerful U.S. Senate Committee on Homeland Security and Governmental Affairs. During his six-year tenure as its leader, he was able to set the agenda of a body that can conduct government-backed investigations. During that time, the committee held hearings and conducted investigations into divisive issues including the integrity of the 2020 presidential election, allegations of political influence within the U.S. Postal Service and the political and private business dealings of President-elect Joe Biden and his son, Hunter Biden.

Though Democrats are expected to face headwinds in the 2022 election, a November poll from Marquette University Law School also showed Johnson may have an uphill climb with Wisconsin voters. The survey found 38 percent of voters said they would support Johnson’s reelection. Fifty-two percent said they would vote for someone else.

On Sunday, Democrats were quick to mount an attack on Johnson’s reelection bid.

“Ron Johnson has been in the Senate looking out for himself at the expense of Wisconsinites and failing to do the job he was elected to do, and it’s time to face the consequences,” said Ben Wikler, chair of the Democratic Party of Wisconsin, in a prepared statement. “In 2022, Wisconsinites will hold Ron Johnson accountable and elect another Democratic senator who will put the interests of our state’s working families first.”