2017 DNR decision under Gov. Walker would have allowed Meteor Timber to fill in Monroe County wetland.

By Isiah Holmes, Wisconsin Examiner - Dec 19th, 2021 06:41 am
Get a daily rundown of the top stories on Urban Milwaukee 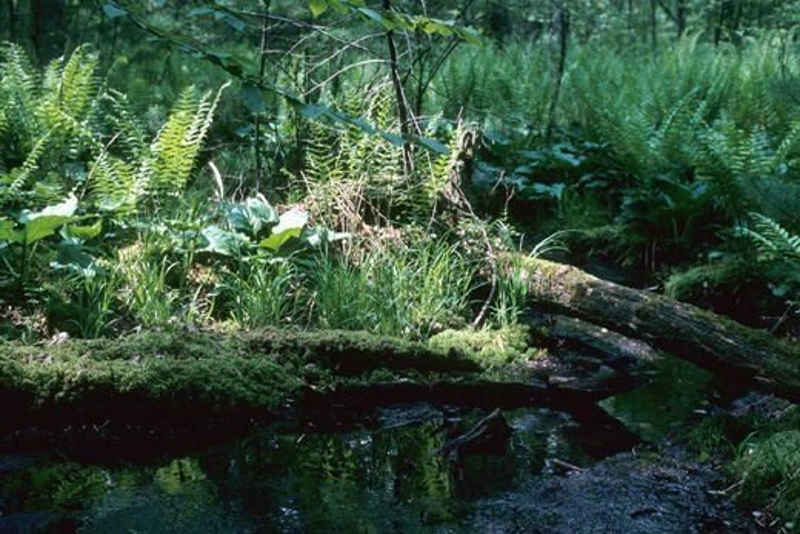 An appeals court decision Thursday on the fate of a 16.5 acre area of untouched, rare Wisconsin wetland affirms a previous court’s ruling invalidating a wetland-fill permit, issued to the company Meteor Timber. The particular area of wetland in question has been designated by the Department of Natural Resources (DNR) as an “imperiled” white pine and red maple swamp. Only a handful of such habitats remain in Wisconsin, and are crucial, not only for wildlife, but also are important assets for flood control.

Rep. Conroy Greendeer of the Ho-Chunk Nation, praised the court’s decision. “We understand the need for extracting resources like the fuel we need to drive to work, but we also know that the costs to our community and to this land outweigh any of the benefits,” said Greendeer. “This decision validates our commitment to protecting these lands, our natural resources, and our community.”

The conflict stemmed from a 2017 decision by the DNR under  former Republican Gov. Scott Walker. At the time, the DNR granted a permit to fill the rare wetland to Meteor Timber, an Atlanta-based company. Meteor Timber wanted to cut down trees and fill in groundwater flows and streams in the area in order to make way for a $75 million frac sand loading facility. The company planned to use that facility to transport sand from a western Wisconsin mine to natural gas frac sites in Texas.

“Today’s ruling is a victory of the Ho-Chunk Nation, for Wisconsin, and for all those who value our natural resources and the public’s role in protecting them,” said attorney Rob Lee. “The decision is also a reminder that even the state’s largest industries and most powerful companies are accountable to our environmental laws.”

Water quality and protecting Wisconsin’s remaining wetland habitats has been a priority for the DNR under Gov. Tony Evers. Evan Feinauer, a staff attorney at Clean Wisconsin, says  half of the state’s wetland habitats which existed in precolonial times have disappeared.

“On one level, this case is about the particular wetlands that would be impacted in Monroe County,” Feinauer told Wisconsin Examiner. “So these are rare wetlands, they’re pristine in the sense that they are not corrupt with invasive species, they’re very native. There’s very few of these places left. So filling a wetland of this quality and rarity is illegal under the wetland statutes. … and it would be a disaster to the environment because wetlands like this provide a whole lot of environmental value in terms of habitat and water quality and reducing the severity and instance of flooding.”

On the other hand, Feinauer feels the case is a test of the integrity of Wisconsin’s wetland permitting process. The frac industry in Wisconsin has been in decline, even during the Walker administration. But Walker became a generous friend to the frac industry, which returned the favor in the form of campaign donations. In 2017, Clean Wisconsin and the Ho-Chunk Nation, represented by Midwest Environmental Advocates, sued the DNR to block the Meteor Timber permit. The company eventually took the case to the court of appeals.

“It’s important for future permitting processes going forward that every i is dotted and every t is crossed, and that all the rules for issuing these permits are followed. Rather than permits going out of the door because, you know, someone is proposing to do something that is politically attractive to somebody at a particular moment in time.”

“We think this is a very straightforward case; there were statutory standards, they weren’t met, and the permit needs to be invalidated,” Feinauer said.

There is a possibility that the case will be taken to the Wisconsin Supreme Court. However, Feinauer believes arguments for the permit in the Supreme Court would be weak. “We lost so many of our wetlands, and we have to work to protect every bit that we can now, even this relatively small bit,” says Clean Wisconsin staff scientist Paul Mathewson. “Protection is particularly important when it comes to rare wetlands like this one, since diversity of our landscape is key to resilience in the face of climate change.” Not only do wetlands help with flooding, which Wisconsin is seeing more of as the years pass, but they also store carbon.

“Nitrates, for example, are the most widespread groundwater contaminant in the state,” Mathewson explains. “One of the proposed solutions for nitrate pollution is for farmers to build artificial wetlands along field edges as a way of filtering out those pollutants that natural wetlands used to filter out, but those natural places aren’t there anymore.”

He also stresses that wetlands can be difficult habitats to repair once they’re damaged or lost. “It takes so much time for land to build up as a wetland and provide all those environmental benefits. Research shows that artificial wetlands just can’t perform as many functions. Even for the functions they do have, they don’t perform as well as natural wetlands. So it’s not as easy as saying, ‘we’ll just make more.’”

Court upholds decision to deny permit to fill rare wetland by timber company was originally published by the Wisconsin Examiner.

One thought on “Court Upholds Protection of Rare Wetland”