Loudenbeck Wants To Be Elections Czar

Her run for secretary of state part of Republican effort to overhaul election laws, oversight. 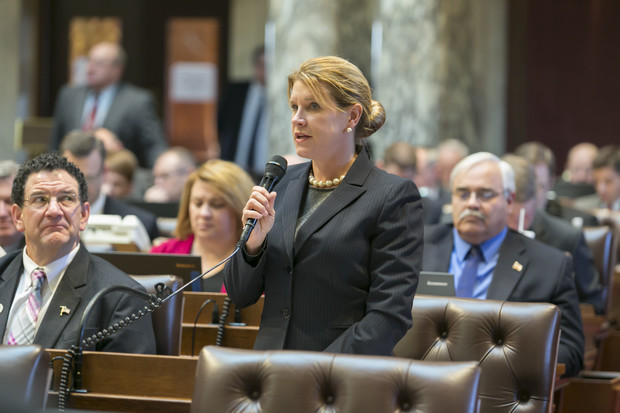 Wait. Is that scenario possible?

Maybe, if several things happen in the next 18 months.

First, Democratic Gov. Tony Evers is defeated by a Republican on Nov. 8, 2022.

Second, Republicans keep control of the Legislature in elections held the same day as the gubernatorial vote.

Third, Loudenbeck gets elected as secretary of state that day, becoming the first Republican to hold that office since 1957. Democratic Secretary of State Doug La Follette, 81, has held the job for 42 of the last 46 years and has not said whether he will seek re-election.

Fourth, Republican legislators and the new GOP governor overhaul the state Elections Commission, keeping the secretary of state position – a job required by the state Constitution but stripped of all important functions – but giving it administrative oversight over elections.

Loudenbeck, of Clinton, whose six terms in the Assembly have included the Act 10 controversy and shaping the state budget as a Finance Committee member, said she would run for secretary of state next year.

When she announced her campaign, Loudenbeck called for reform of the Elections Commission – reforms Republican legislative leaders have promised to pass.

Evers could veto any state law changes to election laws passed next year, however. That’s why “big steal” backers of former President Donald Trump are drafting a potential constitutional amendment, which would not involve Evers and set statewide election standards, the Associated Press reported. President Joe Biden beat Trump in Wisconsin by about 20,600 votes in November 2020, out of 3.2 million votes cast. Numerous recounts found the total was correct and numerous court challenges to the election were unsuccessful.

Assembly and Senate GOP leaders, who have launched separate investigations of the 2020 presidential vote, have demanded that Election Administrator Meagan Wolfe resign after a state audit which no widespread election fraud criticized Commission policies and recommended dozens of changes in state law.

Wolfe has refused to resign, saying she is a non-partisan administrator of a system that relies on 1,835 local clerks and 72 county clerks to run elections and count votes.

But Loudenbeck, 52, said if elected she would “serve as a check” on the Elections Commission, the state agency created in 2015 by the Republican-led Legislature and overseen by a three-Democrat, three-Republican panel.

“That would do what a vast majority of other states do in having a secretary of state who is accountable to the voters and to be more involved in election administration and oversight,” Loudenbeck added. “Voter confidence and election integrity are on people’s minds.”

In a statement, Assembly Speaker Robin Vos thanked Loudenbeck for “working tirelessly” in her 11 years in the Assembly and said she would display a similar “tenacity” if elected secretary of state.

Vos appointed Loudenbeck to the budget-writing Joint Finance Committee, although he chose Rep. Mark Born – and not Loudenbeck – as cochair of that panel one year ago.

Vos could also have the Assembly give initial approval to a constitutional amendment setting statewide election laws next year, although it would still require approval by the 2023-24 Legislature to go before voters.

And, if he’s re-elected as speaker for the 2023-24 session, Vos would have to approve all Elections Commission changes passed in that session – changes that could set up combining the secretary of state and elections administrator positions.

All this means that, when it comes to rewriting election laws, Republican legislators are on offense, and Evers can only play veto-pen defense.

Wisconsin has had three systems of overseeing elections in 11 years.

In 2010, the state Elections Board – a dysfunctional panel of Republican, Democrat and Supreme Court chief justice appointees – was abolished by Republican legislators and then-GOP Gov. Scott Walker.

The Government Accountability Board (GAB) — six retired judges — replaced the Board. But the same Republicans who created the GAB in 2001 abolished it in 2015, saying the Board had unfairly targeted conservatives.

Loudenbeck may not be elections administrator in October 2024. But you can bet on three more years of Capitol fighting over election laws.

One thought on “The State of Politics: Loudenbeck Wants To Be Elections Czar”