Officials have often resisted reforms. Main relief has come from state passage of Act 10. Part II of a series. 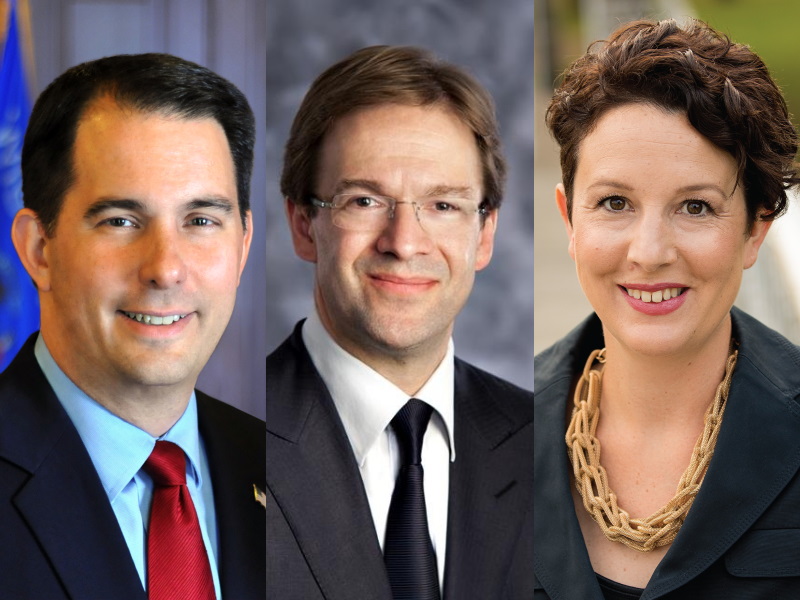 If you were looking for a symbol of the Milwaukee County’s pension excesses, you need look no further than the chairman of its pension board, David Robles. Robles, who served for decades as an assistant district attorney, retired four years ago with a lump-sum “backdrop” payment of $811,148 plus a monthly pension payment that gains him an additional $59,808 per year. He was elected to the board as a representative of the county retirees in 2019 and chosen as board chair in 2020.

You might think board members would avoid anointing someone who got rich on the taxpayers as their chairman, fearing it might send the wrong signal, but in the years since the controversial 2000-01 pension plan was passed, county officials have often seemed heedless of public dismay over its costs. When County Supervisor Sheldon Wasserman went door to door in 2016, in his first campaign for that office, “people brought it up over and over, the pension scandal,” he recalls. “It still gets brought up. They know it’s costly, they know it’s big, they know it’s bad.”

Since the pension scandal erupted in January 2002, county officials have been erratic in pursuing reforms to limit the damage. The county board ended the backdrop for all new non-represented employees in March 2002, but the momentum for reform stalled after Scott Walker‘s election as county executive in April 2003. Though he was elected as a reformer, it took Walker three years to launch a legal suit against Mercer Consulting for the advice it gave officials who passed the pension plan. (Mercer ultimately agreed to a $45 million payment to settle the lawsuit.) And Walker was slow to pursue negotiations with union employees to cut back benefits; not until 2007 was the backdrop ended for all new union employees.

Walker’s main approach was to issue $400 million in pension obligation bonds in 2009. The idea was to save money on the difference between the interest paid on the bonds and the average return on the pension fund’s investments. The county has never estimated how much this has saved (county comptroller Scott Manske believes it may be as much as $100 million). But this also pushed the cost of the pension into the future, as the bonds (which have been refinanced at least twice) won’t be fully paid off until 2030.

Walker’s successor Chris Abele was very committed to finding ways to lower the pension plan’s costs, but often met resistance. He pushed for a cap on the backdrop payments for eligible employees, but the board stalled the idea for months. On December 20, 2012 the board voted 15-3 in favor of the backdrop cap, which was supposed to freeze the pension benefit as of April 1, 2013. If the employee chooses a backdrop after that date, then the monthly backdrop benefit is calculated using the worker’s final average salary, service credit, and applicable multipliers as of April 1, 2013.

The proposal’s leading opponent, Sup. John Weishan, Jr., blasted it as an exercise in “political pornography” and predicted it would be challenged in the courts. There were two court suits by unions representing county employees, both ultimately decided by the Wisconsin Supreme Court, which ruled the pension plan could be amended to reduce prospective benefits.

A story by the Journal Sentinel at the time predicted the backdrop “would die a slow death” under the approved change, which was a wild overstatement. An actuarial analysis done for the county by Buck Consultants estimated the cap would save only $15.7 million in lowered pension costs until all still eligible for the benefit had collected it. But about 35% of the savings would go to employees, since their monthly contributions help pay for the pension. Which left a potential reduction in the pension’s fund’s liabilities of $10.2 million. That’s a pittance compared to the estimated $460 million cost of the backdrop.

And whether the change will actually save $10 million is far from clear. The recent analysis by Urban Milwaukee found the average backdrop since 2016 has actually increased, with an average cost of $143,000, versus $133,000 in the years prior to 2016. Moreover, the three biggest backdrops ever awarded came since the backdrop cap was passed: Gale Shelton, a former assistant district attorney, left with a backdrop payment of over $1.5 million in 2017; James Martin, a former deputy district attorney, got $1.4 million in 2018; and Patrick Keeney, another deputy DA, got a backdrop of $1,342,992 in 2016. That’s because the backdrop freeze still allowed retirees to claim a retirement date prior to April 2013, and the further back you go, the more compounded interest you earn, driving up the lump sum payout.

Erika Bronikowski, Director of Retirement Plan Services, offered examples of employees whose backdrop was affected by the law, but could not offer a figure on how much any lump sum payment was reduced, since her office only does the computations required by the amended law.

In 2015, the board also shot down Abele’s attempt to stop future overpayments to retirees who had collected the wrong amount for years — which would have saved taxpayers an estimated $10 million. The opposition was led by its then-chair Marina Dimitrijevic, who called Abele’s proposal “immoral.” Those overpayments are costing taxpayers as much as the backdrop cap was supposed to save.

Perhaps the most significant reform came as a result of state action, the passage of Act 10, the controversial 2011 legislation that decimated the collective bargaining rights of public employees in Wisconsin. Prior to this, the county had to negotiate any employee contribution to the pension with the unions. But Act 10 mandated a larger contribution by public employees, and that included Milwaukee County employees, a change that happened beginning in 2011.

Get a daily rundown of the top stories on Urban Milwaukee
According to the county’s “Pension 101” guide for employees: “Milwaukee County has for most employees a contribution requirement of 6.5%. So, for an employee earning $60,000 per year, the annual contribution by the employee would be $3,900.” The contributions are deducted from employee paychecks.

The new provision meant county employees were now contributing slightly less than state employees, who contribute 6.7% of their salary for their pension.

Data in the county’s annual pension reports show that “participant” or employee contributions totaled an average of just $247,000 annually in the five years prior to passage of Act 10 and have averaged $10.3 million per year since. That’s an increase of just under $101 million in employee contributions through 2020. If not for those contributions, the county pension fund would have a deficit of $613 million rather than $512 million when it comes to paying for the total pension fund liability of $2.3 billion.

One factor limiting employee contributions is that the number of potential payees — county workers — has greatly declined. That has been driven by the increased costs of the pension, which “contributed significantly to difficult decisions in recent years to reduce staff and service levels,” as a 2020 report by the Wisconsin Policy Forum (WPF) noted.

“Between 2000 and 2015, the number of active employees declined by 43% while the number of retirees grew by 23%,” a 2018 analysis of Milwaukee County by Pew Charitable Trust found. “As of 2015, the ERS membership consisted of nearly 8,000 retirees and around 3,600 members.” At 35%, Milwaukee County had the lowest share of active employees “compared to the 50 states and second lowest compared to the 15 cities” whose pension funds Pew analyzed.

That has continued to drop since then, with active employees now less than 31% of participants in the pension system. As the county Pension 101 guide notes: “The balance of Active vs. Inactive [employees] is important for overall plan health. The County is currently out of balance.”

Beyond limiting the amount of employee contributions, this also presents an issue of equity for current employees, who are paying more to support pensions for veteran employees, including all those hired before 2007, many of whom are eligible for the backdrop and have yet to retire. Yet most of the workers contributing will never see the kind of massive payouts collected by veteran employees.

Pew’s analysis found that, under the current formula, contributions to the retirement system from general employees could increase from 6.5% of salary in 2017 to more than 9.7% within two decades. Today, that increase would mean an additional contribution of $1,785 a year for the average employee, whose salary is $55,779 a year. Such an increase could pose a threat to employee retention and recruitment, analysts have suggested.

One reform with a far bigger potential impact is to eliminate the 2% cost-of-living allowance or COLA for retirees. The Pew report found that reducing the COLA from 2% to 1% could lower the county’s annual contribution to the pension fund by about $10 million annually, while eliminating it entirely could yield annual savings of some $20 million.

A report by the county’s 2018 Pension Sustainability Task Force recommended that county officials “analyze options for reducing the COLA.” Then-Supervisor James Schmitt, chairman of the board’s finance committee and a task force member, voted for the recommendation.

But as the WPF report noted, cutting the COLA for current retirees might be tricky: “Whether such a move would be legally permissible is unknown.” Courts have typically treated pension promises as a “property right” that cannot be taken away.

But it’s a moot point, as the county board had no interest in cutting the COLA. “They just don’t have the stomach for doing something like that,” Wasserman says.”Cutting the payments of old people, that would be political suicide.”

Nor has the board considered cutting the COLA for future retirees. Though that measure, on top of employee contributions that could grow in future years, once again presents the issue of fairness for current workers ineligible for any of the lucrative pension sweeteners.

All told, the pension reforms, savings on pension bonds and Mercer settlement together had a tiny impact on the lucrative pension plan, which will ultimately cost taxpayers some $1.34 billion, as Urban Milwaukee estimated in Part I of this series.

One other proposal pushed by Wasserman and which the 2018 task force recommended was exploring a state takeover of the county pension system. Only the county and City of Milwaukee run their own pension system; every other government in the state is part of the WRS.

But as Wasserman recalls, WRS officials were wary of the idea. “They wanted nothing to do with us. ‘We don’t want you guys,’ one of them told me, ‘it’s too much of a risk'”

And any proposal floated would have required a huge upfront payment to the state to pay for the county’s future pension liabilities, which the county couldn’t afford.

So the idea died. Which leaves the pension system still squeezing the county budget and requiring ever-higher annual contributions.

Additional research for this story was done by Angeline Terry.