City has money set aside to lower speed limits, particularly on side streets. 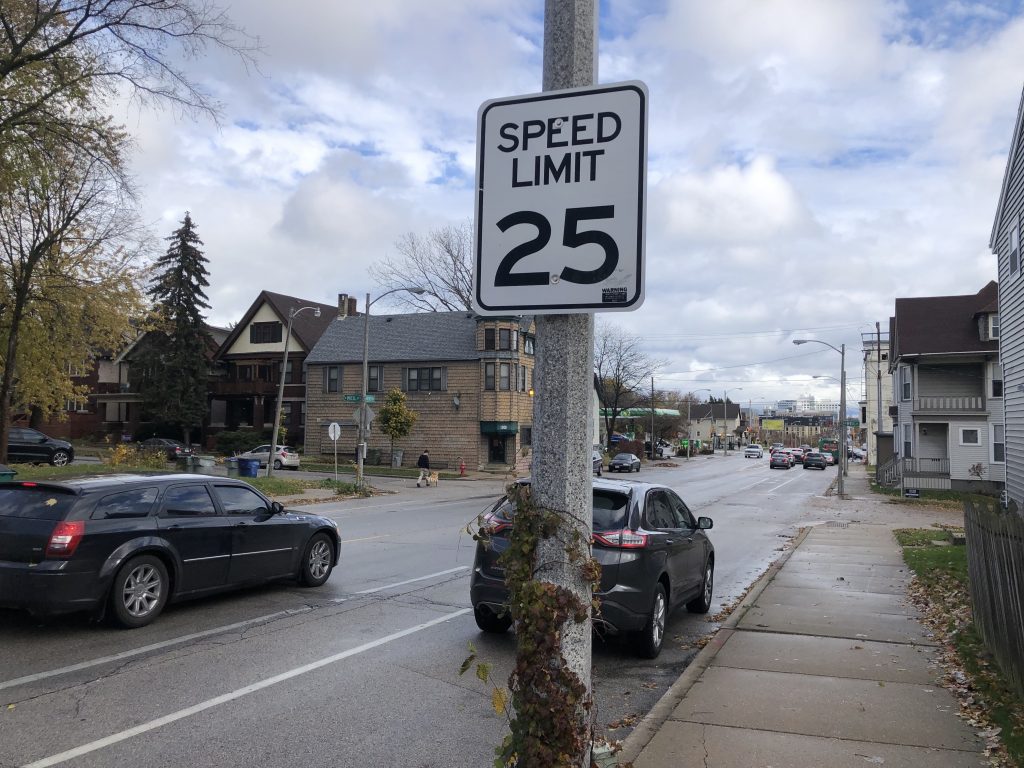 Milwaukee could soon join a national movement to lower speed limits with the goal of reducing the severity of crashes, deterring reckless driving and saving lives.

The speed limit change would be made as part of the “20 is Plenty” movement. Milwaukee’s default speed limit, when no sign is present, is currently 25 mph. Severe injury risk for pedestrians jumps from 25% at 23 mph to 50% at 31 mph and 75% at 39 mph.

“I don’t really think there should be any street more than 30 mph, 35 mph,” said Polenske. “I know that street design has a lot to do with how people drive. We are collectively trying to change that as we do redesign our streets.”

“I don’t necessarily know what comes first, but I think consistency and that messaging around traffic speeds in general in our community is an important conversation to have,” he said.

Get a daily rundown of the top stories on Urban Milwaukee
Cities implementing 20 mph policies include Minneapolis and St. Paul. Madison has a test policy. The newly-elected mayor of Atlanta made speed limit reduction a point of his campaign.

“I think that’s a great idea, but it always struck me as ‘what are we putting up gold plated signs?'” said Ald. Robert Bauman of the cost.

City Engineer Jerrel Kruschke said given the 1,400 miles of city roadways, the signs, despite being printed in-house, would cost about $1 million to fabricate and install. He said the city would also need to invest in education.

“I don’t know how much education you need to say ‘I’m not supposed to go faster than 30.’ I’m not sure if there’s a class to take. A billboard. It just seems elementary,” said Ald. Mark Borkowski. “I hear education and it drives me crazy because it’s so damn simple.”

“My thoughts on this is education and outreach are not the only thing you do. Just like changing the speed limit isn’t going to work by itself, you have to be progressively changing the design of the streets,” said Polenske.

“Speed limit, we know how fast you can go, you’re not supposed to go faster. There is no magic there. Stop, again, no magic,” said Borkowski. “If we’re hanging our hat on education I don’t have faith in it, I just don’t.”

“A part of that is reaching new drivers,” said Polenske. “I think that’s part of the challenge we are in right now. We have a lot of new drivers or young drivers that haven’t been properly taught the skills of our driving on our roadways.”

“Why isn’t this like done?” asked Bauman of the change.

“There has been discussion of whether or not this is the proper use of the money,” said Polenske. “When we agreed on this initiative we agreed this was something we agreed to come back to the council to discuss.”

Bauman said it was an immediate concern. “Make it happen. Do it. Decide something.”

“We are,” said Polenske, but he said the council would need to adopt any speed limit change.

Ald. Jose G. Perez said the Milwaukee Police Department needs to be part of any discussion. “If this is a multi-faceted approach, all the players have to be at the table talking about their commitments,” said the alderman. He suggested the court system would also need to be part of a solution.

5 thoughts on “Transportation: Should 20 MPH Be Milwaukee’s Default Speed Limit?”