Bay View Trades One Road Closure For Another

Kinnickinnic Avenue will be closed for bridge repair. KK Can Opener has damaged at least 10 trucks since August 1. 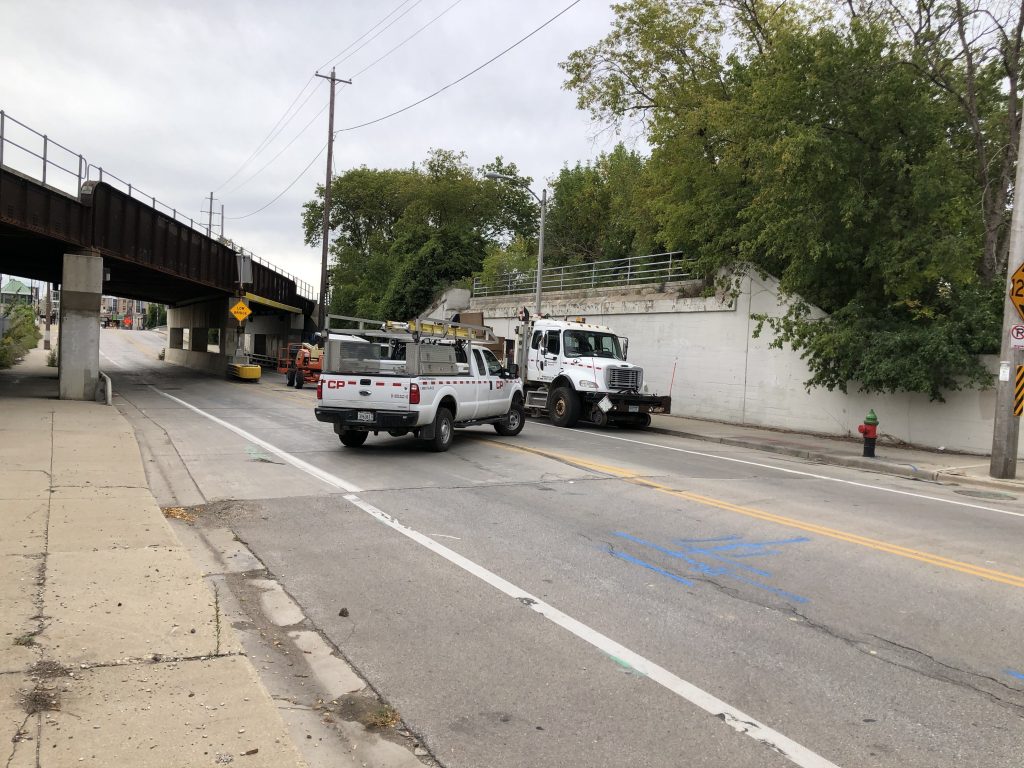 A crew from Canadian Pacific makes repairs to the mainline bridge over S. Kinnickinnic Ave. in Sept. 2021. Photo by Jeramey Jannene.

With the rebuild of Becher Street from S. 4th St. (Interstate 94) to S. Kinnickinnic Ave. nearly complete, a second road construction project will alter traffic flows in and out of Bay View.

S. Kinnickinnic Ave. will be closed in both directions between E. Maple St. and E. Becher St./E. Bay St. Temporary closures have affected one direction of traffic in recent weeks.

The full closure is scheduled to begin Nov. 15 and conclude by Dec. 3.

The closure will allow for repairs to the Canadian Pacific railroad bridge between the Kinnickinnic River and E. Maple St. Access to the handful of businesses within the closure area will be maintained.

A detour will be established using S. 1st St. and E. Becher St.

The start of the second project is contingent on the completion of the Becher Street project.

In addition to repaving the roadway, the Becher Street project includes the addition of raised bike lanes separated from both the travel lanes and sidewalks between S. 4th St. and S. 1st St. A painted bike lane will be located east of S. 1st St.

Since August the street has been closed to westbound traffic.

Get a daily rundown of the top stories on Urban Milwaukee
At the time of the closure, we noted that the truck-damaging KK Can Opener railroad bridges might get the chance to rip off the top of an increasing number of trucks. The two bridges, located on the stretch of S. Kinnickinnic Ave. that will soon be closed, have a long history of sheering the top off of the trucks of inattentive drivers.

A loyal following of the humorous Facebook page has seen an uptick in activity since the Becher Street project began.

That hit a crescendo on Oct. 26 when one semi-truck driver first damaged their trailer on the southern bridge before proceeding north, in the oncoming traffic lane, and striking the northern bridge.

According to the Facebook page, the bridges were struck in at least four separate incidents in October. That follows at least three in September and three in August.

But the KK Can Opener is scheduled to lose one of its jaws. The roadway under the southern railroad bridge, near E. Stewart St., will be lowered in 2022 to accommodate trucks entering Komatsu Mining‘s new South Harbor Campus development. The recently-paved truck access point for the under construction factory is located between the two railroad bridges.

No roadway changes are planned for the northern bridge, for which the November closure will allow for repairs of the columns and footings. It is the more heavily trafficked bridge, serving as Wisconsin’s primary railroad link with Chicago.

In Sept. 2020, S. 1st St., which is seeing a sustained amount of detour traffic as a result of all the other road projects, received grant funding to support the installation of improved on-street bike lanes to serve as a link between the two off-road segments of the Kinnickinnic River Trail.

One thought on “Transportation: Bay View Trades One Road Closure For Another”