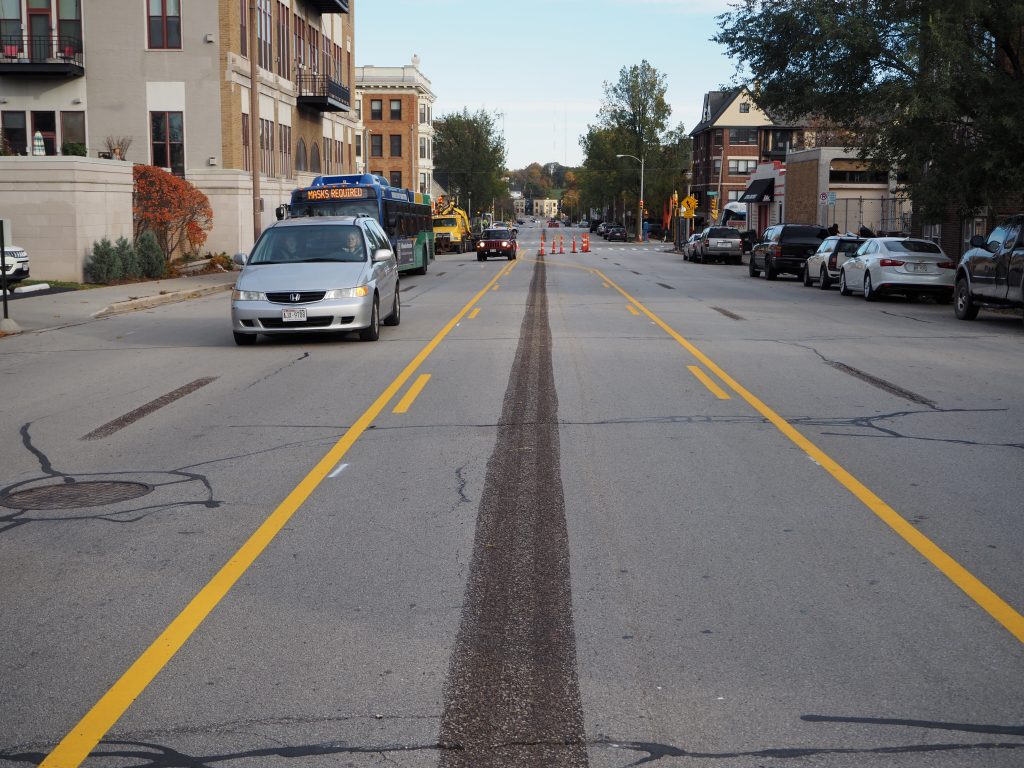 One of the main streets through downtown Milwaukee will soon look, and function, differently.

From E. Kilbourn Ave. to just north of E. Brady St., the Department of Public Works is reconfiguring N. Van Buren St. to be a two-lane street with a center turn lane.

Under its longstanding configuration, N. Van Buren St. was a four-lane street with two travel lanes in each direction. The speed limit, as currently posted, is 30 miles per hour.

“Due to the increasing concerns with speeding and pedestrian safety on Van Buren Street, DPW is reconfiguring this stretch of Van Buren,” said DPW in a statement. The street is included in the city’s Pedestrian High Injury Network mapped as part of the 2019 Pedestrian Plan.

The Van Buren road diet includes the immediate addition of painted bicycle lanes. Parallel parking will be maintained on each side of the street.

The Van Buren reconfiguration will extend just north of the intersection with E. Brady St. to the Holton Street Viaduct. The angled viaduct has the roadway changing to N. Holton St. as it runs through Riverwest and Harambee. That street is already a two-lane street with bicycle lanes and much of it is not included in the high injury network.

Work to reconfigure the roadway is expected to be completed this week. The project is approximately three-quarters of a mile in length.

The one-way portion of N. Van Buren St., which exists south of E. Kilbourn Ave., will be unchanged as part of the project. 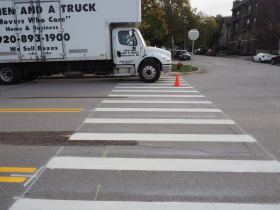 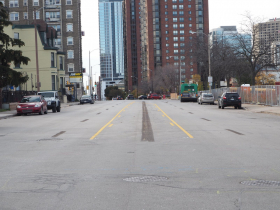 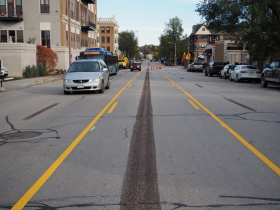 “While this interim improvement will make the street safer and more comfortable for all users, more substantial improvements are being considered along Van Buren that will further enhance the comfort and safety of people walking and biking,” said the department.

Area Alderman Nik Kovac, DPW officials and bicycling advocates have all openly discussed adding more substantial bicycle infrastructure to the street. The regional Route of the Badger bicycle network plan also calls for the street to serve as a key cycling corridor.

Get a daily rundown of the top stories on Urban Milwaukee
“That street for me is where I want changes the most,” said Kovac during DPW’s Oct. 8 budget hearing, while also floating changes to Prospect, Farwell and other arterial streets in his district. The Locust Street and North Avenue bridges over the Milwaukee River received protected bike lanes in 2019. He called for constituents to continue to request changes where they think they are needed.

In phases, DPW has added protected bicycle lanes to Kilbourn Avenue through Downtown in recent years. But connecting any future Van Buren lanes to Kilbourn would require extending the existing protected lanes one block farther east of N. Jackson St.

Kovac, during the budget meeting, called on DPW to speed up its work. “I understand these things take time, but even I am starting to get a little impatient,” said the alderman.

“I will say one thing we are trying to do the most in DPW is break down the silos,” said Public Works Commissioner Jeff Polenske. He said he wanted to keep the multi-modal unit working alongside other DPW officials, unlike a department reconfiguration proposed by Common Council President Cavalier Johnson for a separate transportation unit.

Cycling advocates and Riverwest residents criticized DPW decision-making during a June update on the long-planned rebuild of N. Humboldt Blvd. The project was delayed to allow protected bicycle lanes to be considered, but the lanes were ultimately dropped from the final design due to concerns about trees, transit and parking.

“It wasn’t a perfect discussion,” said Polenske in October.

“Don’t give up on us even though we couldn’t figure it out on this one,” said Kovac in June.