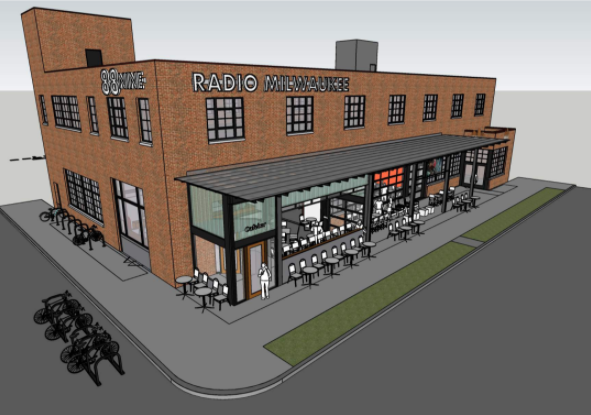 The vacant cafe space at 88Nine Radio Milwaukee‘s headquarters will soon see new life. It has been vacant since Stone Creek Coffee closed its cafe in November.

A new cafe and eatery is slated to open in the space, 220 E. Pittsburgh Ave., in February.

The nonprofit radio station announced a $770,000 renovation plan for its two-story headquarters Tuesday that includes expanding the space, adding a kitchen and reconfiguring the outdoor seating area. The cafe space connects with the adjacent 100-seat performance space used for concerts and community meetings.

“Our latest investment will add to the economic vitality of the growing Walker’s Point neighborhood,” said executive director Kevin Sucher in a statement. “It will also create new and improved spaces where the community can have a quick bite or camp out for the day to create and collaborate, with food and beverage offerings to help fuel them.”

The unnamed cafe and eatery will be led by former Meraki chef and owner Chad Meier. Meraki closed in August 2020 amidst the COVID-19 pandemic.

Meier hired The Kubala Washatko Architects to lead the design of the new space. Plans include a 330-square-foot addition to the front of the cafe, adding an overhang over the reconfigured sidewalk seating section, installing three garage doors to allow partial open-air use of both interior spaces, building a kitchen in the rear of the cafe and reconfiguring the cafe’s layout. The new space will have 35 indoor seats and 30 outdoor seats.

Get a daily rundown of the top stories on Urban Milwaukee
Funds for the renovation were provided by “generous donors who asked to be anonymous,” said the station in announcing the proposal.

The 14,000-square-foot Radio Milwaukee building was originally built as a foundry for Ullstrup Tool & Die Corp. in 1952, but redeveloped into a home for the radio station in 2013. A handful of first-floor studios are joined by an office suite and more studio space on the second floor. The rooftop of the building includes a performance space and green roof. The property, much of which is tax exempt, was assessed for $231,100 in 2020.

A community reception will be held Dec. 1 at 5:30 p.m. (and also streamed live on the 88Nine Facebook page) to unveil the cafe name and menu.