“Is this fair?” The Campaign Against Electoral College

Taking to the streets for the National Popular Vote. 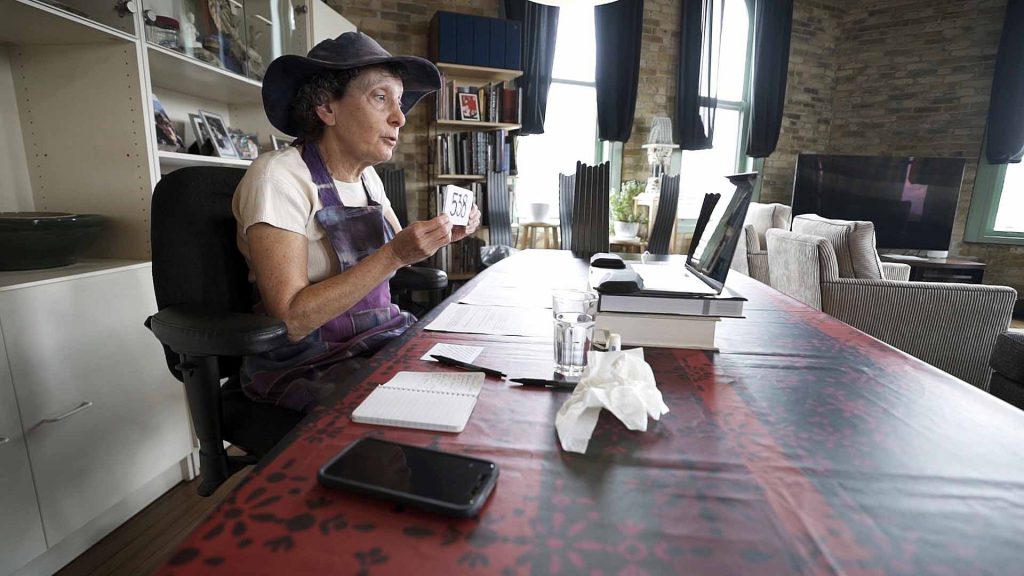 Pegi Christiansen on a zoom call with Congressman Jamie Raskin on September 22, 2021. Photo by Cindy Johnson.

How often do you get to speak with one of your heroes? On September 22nd, I had a fifteen-minute Zoom with Congressman Jamie Raskin (D-Maryland). I will remember these fifteen minutes until the day I die. Raskin was the lead manager for the second impeachment trial of Donald Trump this year. The reason Raskin was willing to Zoom with me is because as a state senator he introduced the National Popular Vote (NPV) bill in Maryland, the first state to pass it in 2007.

In February of 2019, I listened to now deceased Congressman Elijah Cummings’ closing remarks at the hearing of Trump lawyer Michael Cohen. Cummings asked, “When we’re dancing with the angels, the question will be asked: In 2019, what did we do to make sure we kept our democracy intact?” What I did was to write and memorize a five-minute piece I titled “Is this fair?” to urge people to contact their state legislators to pass the NPV bill.

I initially practiced at places like the UW-Milwaukee Union and outside the Public Market in the Third Ward. I approached people wearing a purple suffragette apron and hat that three local artists designed and sewed, so I would stand out a bit.

In 2020, my husband sewed a purple facemask for me so I could continue after Covid. Exactly 59% of the time, the people listening took a small card I handed out with the NPV website link to email a message to their state legislators.

The urgency of my efforts increased this year because Representative Gary Hebl (D-Sun Prairie) reintroduced the NPV bill in April. With enough emails to state legislators, maybe the bill could get out of committee. The committee is dominated by Representative Janel Brandtjen (R-Menomonee Falls), who has made false claims about election fraud and in August tried to subpoena officials to start an Arizona-style investigation of ballots.

To connect with Republicans, who tend to be most opposed to the NPV, I primarily drove to conservative areas of Southeastern Wisconsin. The Tuesday Thiensville Farmers Market was classic. In a recent visit, the car next to me in the parking lot had a handmade sign in the back window reading “Joe Biden was not elected.” Last year at the same market, a young woman with her mom yelped, “Ewww. No!” when I offered her a card.

I imagined I might get pushed or even hit by someone. In the 623 times I presented “Is this fair?” this never happened. Occasionally people screamed at me, but many more people thanked me. Only sixteen people indicated they knew anything about the NPV.

A number of people have asked why I didn’t use Facebook or YouTube instead. Why drive around to all these conservative places to be scorned? I followed the instructions of Timothy Snyder from his 2017 book “On Tyranny: Twenty Lessons from the Twentieth Century“: “Power wants your body softening in your chair and your emotions dissipating on the screen. Get outside. Put your body in unfamiliar places with unfamiliar people.”

I thought I would culminate my two-year project doing “Is this fair?” in Lafayette Square across from the White House, but then State Fair actually happened this year (it did not in 2020). I stood outside the fair, along 84th Street, for nine of the 11 days in August and spoke to 463 people. I adore Wisconsin, and was able to embrace the whole state. Everything happened. People brought up the most common criticisms of the NPV. “This will mean New York and California decide who is president.” This is false. There are an almost equal number of people voting in rural districts and dense urban districts. When I told a man how the NPV would make everyone’s vote count the same, he yelled “Screw you!” In 2019, this might have set me back, but not in 2021. I just took a sip of water and gave my next pitch. People insisted that if the EC was what the Founding Fathers wanted, it should remain. I countered, “What the Founding Fathers imagined in 1787 is not how the winner-take-all Electoral College functions today. As political parties emerged, Thomas Jefferson, James Madison, and Alexander Hamilton all feared the direction states were heading and suggested changes.” One day, I ended up speaking with Robert Spindell, a far-right member of the Wisconsin Elections Commission. Spindell is one of ten Republicans who attempted to switch Wisconsin’s ten EC votes from Biden to Trump. He gave me his card and told me to contact the commission to present “Is this fair?” at the upcoming meeting, which I did on September 9th.

The NPV is nonpartisan. The Republican party benefitted in 2016 and 2000, when Hillary Clinton and Al Gore won the popular vote, but this could change. Texas has the second largest number of electoral votes. If Texas turns blue, as some predict might happen by the 2028 presidential election, Republicans could have a very hard time winning in the EC for years to come. It still shocked me that Spindell would react positively to “Is this fair?”

The State Fair experience was so fulfilling that I cancelled going to Washington, D.C. The people at State Fair are my people. We Wisconsinites are a special breed. I am analyzing what I accomplished over two years. Certainly, I educated hundreds of people, including a young man I spoke with who had never heard of the EC. I changed some people’s minds. Except for a New York political science instructor I spoke with in the Third Ward, everyone learned something. If we’re lucky in high school, we are taught that the president is elected by the EC, but rarely is any time devoted to how it really functions. I hope some of the hundreds of people who took the card I handed out actually contacted their legislators.

Practicing for the Zoom with Raskin I kept crying and worried I would make a terrible presentation, or that Raskin would be tied up with other things and would cancel. However, he appeared right on time. I told him about driving to 2014 Center Street where his father, Marcus Goodman Raskin, who helped found the Institute for Policy Studies, lived as a youth.

Since the NPV bill passed in Maryland in 2007, I thought Raskin’s interest in the compact would have waned. This proved not to be true. He gave me his current top three arguments for the NPV. As things stand now, “the loser can win.” He pressed, “The Electoral College renders irrelevant the voice of the country.” And referring to the January 6th insurrection, the EC “is an invitation to strategic corruption and violence. There are booby traps in the Electoral College that bad faith actors can use.”

The Zoom with Raskin was the perfect closing. However, the interaction that made me the happiest occurred in July in Shorewood. There was a block party on part of Oakland Avenue. After my presentation, a mother with two kids took a card and patted me on the shoulder. There was a certain look in her eyes.

That woman saw that she could do something like “Is this fair?” too.

9 thoughts on “Op Ed: “Is this fair?” The Campaign Against Electoral College”