By Melanie Conklin, Wisconsin Examiner - Sep 12th, 2021 11:55 am
Get a daily rundown of the top stories on Urban Milwaukee 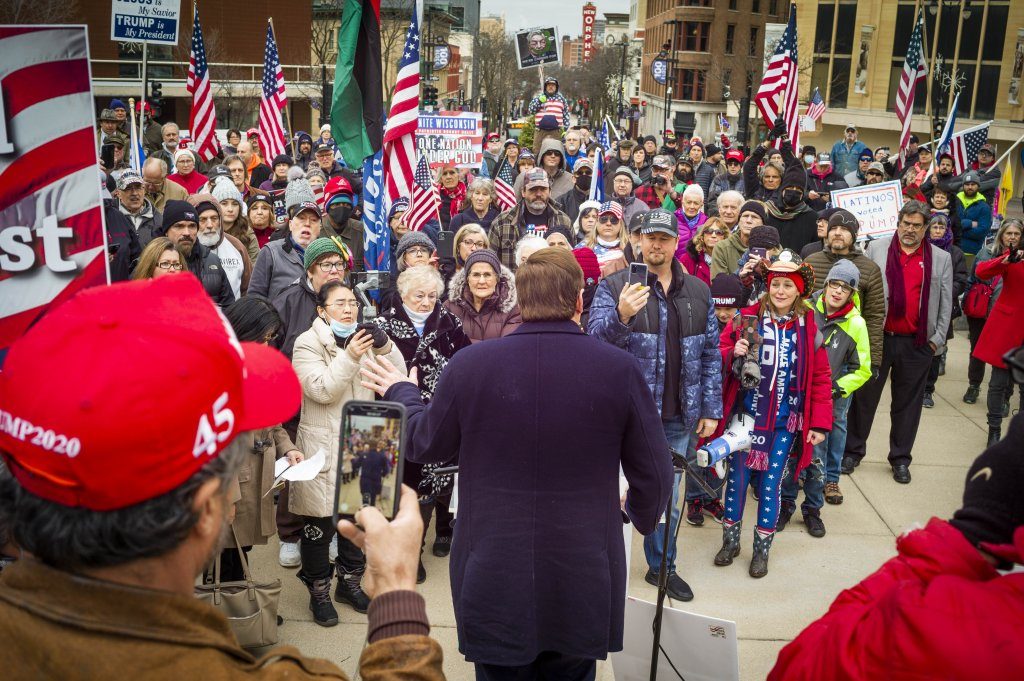 There were no allegations, voiced by elected officials and Trump lawyers, that votes were stolen with the help of Facebook CEO Mark Zuckerberg, as has happened previously at Assembly election committee meetings.

There was no meltdown by a CEO of a pillow company after he failed to show promised proof of a stolen election, as Wisconsin officials travelled to South Dakota to observe.

There were no conspiracy theorists given a microphone to call out “urban” areas as cheating to throw the race for Joe Biden, as also happened at Assembly elections committee meetings.

And there was no legislator posing for pictures with Donald Trump to assure his backers on the far-right that there will be a super-duper-cyber-ninja-machine-seizing-bamboo-ballot-hunting audit to dig up fraud despite more than a dozen other checks proving it didn’t take place, as Speaker Robin Vos did.

Wednesday’s meeting — run by conservative Republican Sen. Kathy Bernier (R-Chippewa Falls)  —  was two-and-a-half hours of verifiable facts, presented by experts in their fields giving excruciatingly minute details on the redundant levels of security and checks done before, during and after Election Day in Wisconsin.

What makes the Senate Elections, Election Process Reform and Ethics Committee meeting notable is that it was not only Democrats pushing back on the false claim that the 2020 presidential election was stolen. Bernier — saying she was sick and tired of false propaganda and misinformation — assembled a presentation of facts and security practices put on by the people who run the elections.

In short, it was what the public should expect from an elected body.

“We do a huge system test on everything,” began Rock County Clerk Lisa Tollefson, the first speaker. “Our elections are not done by one person. It’s a coordinated effort throughout the entire state. It starts with our municipalities —  so our towns, our villages, our cities, our counties, our state and our election providers — we all work together to make elections happen. It doesn’t end up in a little … backroom making this happen. It is all checked and balanced, back and forth between all of us to make sure our elections are fair and transparent.”

Her statement was only noteworthy because it came after months of disinformation and increasingly wild allegations and hundreds of thousands in taxpayer dollars allocated for a so-called “cyber-forensic audit” overseen by Speaker Robin Vos and his special counsel former Justice Michael Gableman, goaded on by Assembly elections committee chair Rep. Janel Brandtjen (R-Menomonee Falls), who told her constituents in a newsletter that Donald Trump won the 2020 election in Wisconsin.

Republicans in the Legislature, particularly the Assembly, have been perpetrating the illusion that there was massive fraud with their rhetoric and then justifying multiple, expensive audits by saying the constituents who are listening to their rhetoric about fraud are concerned the election was rigged.

Bernier, Brandtjen’s counterpart in the Wisconsin Senate, brought together Rock County Clerk Lisa Tollefson, Brookfield Municipal Clerk Kelly Michaels and Wisconsin Elections Commission Administrator Meagan Wolfe. Later in the meeting they were joined by the chief security officer and his colleague from Elections Systems and Software, one of the companies that makes election equipment for Wisconsin, who demonstrated how the machines run and how their processes are secured.

The speakers detailed the practice of updating poll books on a daily basis throughout the state right up to Election Day to ensure accuracy. They described tamper-proof seals put on the machines. They explained procedures, tabulating and canvassing votes, audits, checks for fraud and mistakes and election equipment with “multi-factor authentication” and “endpoint detection,” to ensure that only a secure, approved device can  access the database system. Wolfe said absentee ballots are collected and tracked at the municipal level and are also required to be tracked in the statewide system.

“We’re in charge of securing that system as well,” said Wolfe. “And despite the fact that we have more than 2,000 users of our system, we have some incredible security features built into that system, because again it’s the clerks’ data, it’s the voters’ data, but we’re securing that database. … It’s a very robust system.”

Some of the Assembly members who traveled to Arizona to observe that state’s widely discredited Cyber Ninja audit, including Brandtjen and Rep. Dave Murphy (R-Greenville), were in the room and asked a couple of questions. But Bernier let attendees know from the start that she would not tolerate any grandstanding.

“The reason we are having this is because so many people ask me so many questions about the electoral process,” said Bernier, a former county clerk, who has stated publicly that she does not believe any additional audits of the 2020 presidential election are needed.

Her questions to participants were primarily technical on how machines and processes work — in stark contrast to the election meetings held in the Assembly where most of the individuals invited to testify, including bystanders with no particular expertise, expressed the viewpoint that there was rampant fraud and malfeasance in the 2020 elections, a widely discredited assertion.

“I really hope those who doubt the integrity of Wisconsin’s elections are watching the informational hearing going on now in the WI Senate,” tweeted Sen. Chris Larson (D-Milwaukee). “They are explamiining the entire process of vote-counting and verification from start to finish. WI elections are safe and secure.”

The clerks also pointed out a fact that was not highlighted in Assembly election committee meetings, where a number of election observers complained about not being able to stand close enough to poll workers. Wisconsin, like other states, had a dearth of poll workers in 2020, with many people staying home out of concern over COVID-19 being spread at the polls. Many poll workers are retired, elderly civic-minded citizens, whose age would have made them particularly vulnerable to observers who were insisting on standing as close as possible to observe the ballots and complained about social distancing, seemingly forgetting the pandemic.

After the clerks took questions, the chief security officer for the private company Election Systems and Software, which supplies equipment throughout the state, listed all the security built into the voting equipment and tests that were run. Chris Wlaschin also gave his career bonafides, including overseeing all cyber security for the federal Department of Health and Human Services and his experience in security as a U.S. Naval officer.

His company, he said, voluntarily submitted these election devices to Homeland Security, on top of other extensive testing and product evaluation. They also work with the FBI in designing and building their equipment so it can address any potential threats.

“There’s a whole lot of testing that goes on before it ever makes it to the state, and we’re proud of that,” said Wlaschin. “The proof is in the pudding. I’ve observed elections all over the country where we have a footprint — in 42 states — and I can tell you that municipalities, the counties, the state of Wisconsin, are doing it right. Doing it right.”

On Wednesday, Bernier was not the only Republican pushing back on false assertions that the election was stolen. In a separate event, the States United Democracy Center, a nonpartisan group that advocates for fair elections, held a conference call with two GOP officials who spoke out against the Vos-Gableman audit. Former New Jersey Gov. Christine Todd Whitman and former Kentucky Secretary of State Trey Grayson, said the audits in Arizona and Wisconsin are disinformation campaigns that pose a threat to democracy.

“We need leaders who are focused on governing, not pushing unfounded lies about a settled election nine months after the fact,” said Whitman, a Republican who served as head of the Environmental Protection Agency under former President George W. Bush. Grayson said such audits and the misinformation they spread hurt democracy, as well as the future of the Republican Party. The group put out its own report comparing Wisconsin and Arizona audits titled, “Wisconsin Poised to Become Cyber Ninjas 2.0.”

But the most definitive quote of the day was not from the national figures, but from Bernier as she drew her informational hearing to a close.

“I think we did a bang-up job in two hours and 15 minutes,” concluded Bernier.

She told the group that in her first run for the state Assembly in 2010, she won by 87 votes on election night, which became 93 votes after a recount: “As a county clerk, I had, honestly, 100% confidence that that Assembly seat was not going to change because I was that confident in the processes that we have set up.”

She says those processes have only improved since 2005 when a statewide voter registration system was brought on line. Two statewide recounts, one after the election of Supreme Court Justice David Prosser and one after the 2016 Trump election, also backed up initial results, she pointed out.

“I don’t think we’re gonna go to the purple ink and sticking our finger in the ink pad,” she continued. “We have a great system overall. Is it perfect? No, I don’t think you will find a perfect system, because we have very imperfect people, and we are human beings. So with that said, I hope you learned a lot about our system where the checks and balances are.”

She told everyone who attended the meeting, without singling out the GOP Assembly members present who visited Arizona, that if they have any questions to contact the “folks who are on the ground and doing their level best,” gesturing at the panel.

“I’m sorry, but there is not a reason to spread misinformation about this past election, when we have all the evidence that shows otherwise,” Bernier concluded as she adjourned the meeting. “So thank you for attending. Have a wonderful day.”

One thought on “Republican Schools Colleagues on Election Lies”