Are you with Team Vos or Team Brandtjen? Fish for unproven problems or overturn 2020 election?

By Melanie Conklin, Wisconsin Examiner - Sep 1st, 2021 03:09 pm
Get a daily rundown of the top stories on Urban Milwaukee 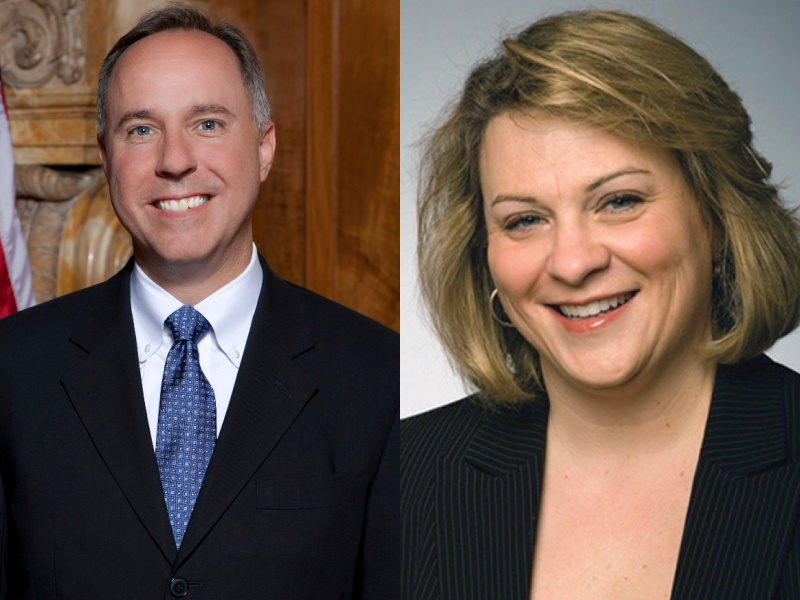 With no public hearing or public meetings — using merely a paper ballot distributed by Republican leadership to members’ offices — the committee that sets the Legislature’s agenda voted along party lines 5-3 to hire staff and officially begin an election audit under the direction of Speaker Robin Vos.

The brief 5-line ballot did not specify any funding — or cost limits — on the election investigation, but Republicans have indicated they plan to spend $680,000 on “at least to start” in their hunt to find fraud and a “steal” of the presidential election.

The actual ballot wording allows Vos to appoint someone to “oversee an Office of Special Counsel” investigating the integrity of the election. (Well before the vote he had already tapped former Supreme Court Justice Michael Gableman — an outspoken critic of the 2020 presidential election.)

The $680,000 number was first tossed out during an interview by rightwing conspiracy promoter and former Donald Trump advisor Steve Bannon during a podcast interview with Trump’s former chief of staff and GOP party leader Reince Priebus. However, the actual legislative ballot contained no dollar amount, leaving to Vos’ discretion how much he wants taxpayers to spend. 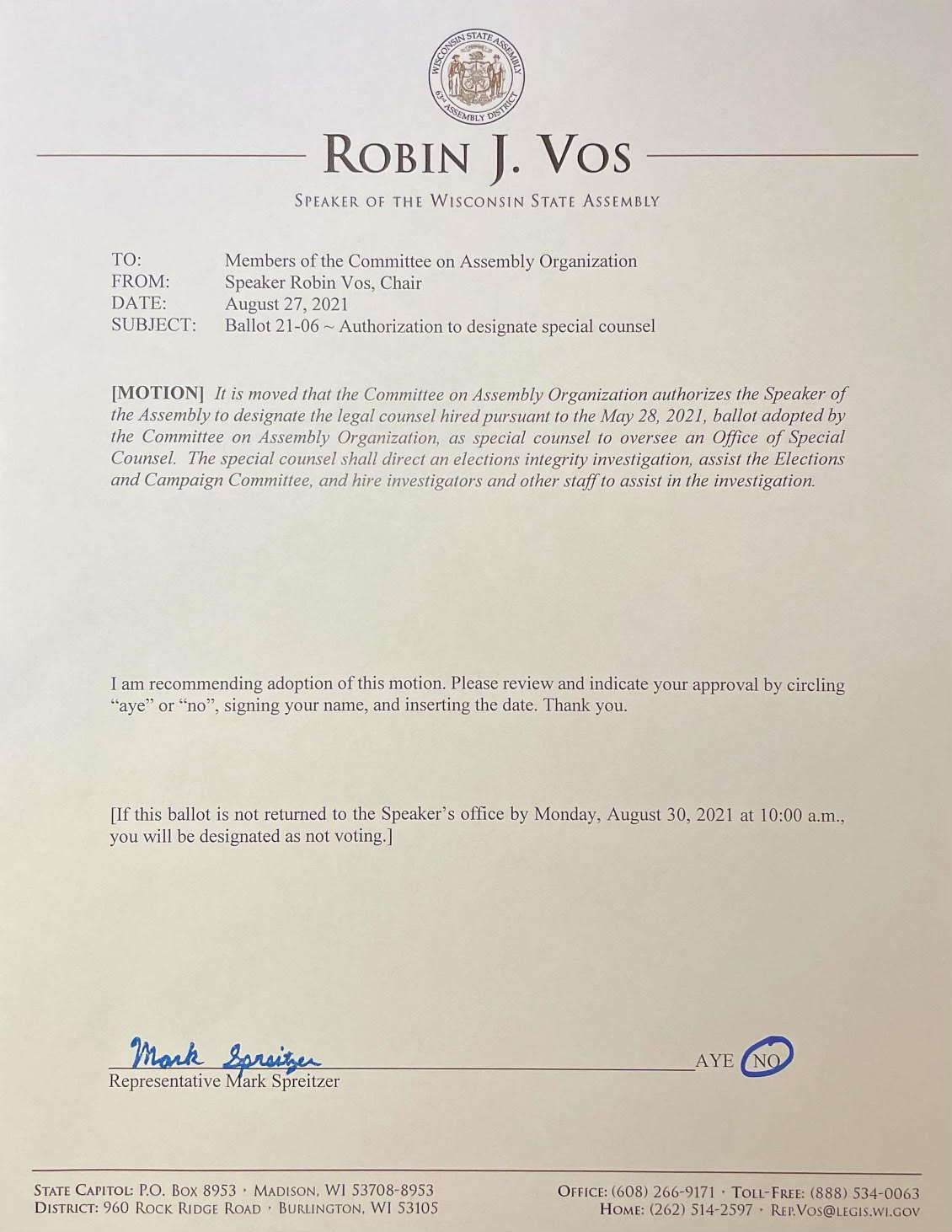 The paper ballot from the vote authorizing the Wisconsin election audit.

“The ballot was incredibly vague,” says Rep. Mark Spreitzer (D-Beloit), who sits on both the committee that voted Monday to move forward on the election audit, as well as on the Assembly Committee on Campaigns and Elections, chaired by Rep. Janel Brandtjen (R-Menomonee Falls). Brandtjen’s committee is also conducting an audit, one that appears to have the backing of the rightwing fringes of the Republican party. They have held rallies and slammed Vos’ vision for an audit, taking up the cry of ‘Toss the Vos.’

Asked if Vos could spend $680 million rather than $680,000 under the terms of this ballot, Spreizter confirms with a laugh, “Technically, he could.”

Spreitzer adds, however, that there is a further, serious potential implication from the Republican Legislature’s blank-check spending on an election audit, particularly with unlimited funds for redistricting lawyers — as well as potential lawsuits against UW System President Tommy Thompson, Dane County and other entities looking at mask mandates or vaccine requirements. “One thing to keep an eye on is that these costs all add up,” says Spreitzer. “There is a requirement that schools get a certain amount [from the state] to meet maintenance of effort requirements, and that minimum is set based on the total amount of [general purpose revenue] actually spent.” In other words, if Republicans spend too much of the state’s general funds on lawsuits, they might run afoul of federal rules that require the state to maintain a high enough proportional level of funding for schools to remain eligible for more than $2 billion in federal school aid through pandemic relief programs.

Earlier this month Vos flew to a rally with Trump, who posed for a picture with Vos. The photo appears to be an attempt to pacify Brandtjen backers, who held a rally where many called for Vos’ removal.

Spreizter says it was unclear from Monday’s vote how the two committees’ audits would function and what interplay there would be — or even if they would conduct separate or combined audits. Vos has not signed the subpoenas Brandtjen wants, but has confirmed he will sign whatever subpoenas Gableman desires. The brief ballot motion states only that the special counsel, AKA Gableman, will “assist the Elections and Campaign Committee.”

The Wisconsin presidential election is also being audited by the Legislative Audit Bureau, a nonpartisan legislative agency. And it has been confirmed as accurate in three canvases, two partial recounts, random machine audits, the Wisconsin Elections Commission oversight and withstood various court challenges.

In a sign that there is still a division among Republican election skeptics, some legislators are getting lobbied to support the Brandtjen audit instead of Vos’ plan. Previously, that audit was referred to by supporters as a “cyber forensic audit,” but with Vos now calling his audit by that name, Brandtjen’s supporters are now demanding a “Full Forensic Physical and Cyber Audit” (or FFPCA for short) in contrast with Vos’ “forensic cyber audit.” Proponents of election-fraud theories, both groups and individuals, continue to express dissatisfaction with Vos on various message boards and email lists viewed by the Examiner. A key difference appears to be their desire to seize machines and materials.

Brandtjen, who told her constituents in a newsletter that Trump won Wisconsin, has been joined in her efforts, including an attempt  to seize election machinery by Rep. Timothy Ramthun (R-Campbellsport). The backers of “The Brandtjen Subpoenas” indicate they plan to hold another rally supporting Brandtjen and Ramthun.

While Vos in his public remarks has tried not to alienate either the Republican base that is convinced Trump won the 2020 election, or moderates who don’t buy Trump’s election conspiracy theories, “It’s not clear to me if Vos was successful in his efforts to triangulate Trump and Brandtjen,” says Spreitzer.

Vos and Brandtjen could not be reached for comment, but reporter Adam Rogan reported on an event for the Racine Journal Times, put on by Honest, Open, Transparent (H.O.T.) Government last week where Vos was the guest and he criticized the Arizona audit and told the group he did not want Wisconsin’s audit to resemble Maricopa County’s audit.

H.O.T Government is critical of Vos on its Facebook page and according to that site has hired Thomas E. Moore Society’s embattled attorney Erick Kaardal — who also testified before  the Assembly Elections committee — “in pursuit of the truth of what happened within the City of Racine, WI concerning their active participation and collaboration with the MARK ZUCKERBERG funded non-profit, CENTER FOR TECH AND CIVIC LIFE (CTCL) in allowing CTCL to design and implement their election and its processes.”

Vos told the group members assembled that he wanted to look forward to election changes for the future — a talking point he has made in the past — rather than aiming to overturn the presidential election. That did not sit well with everyone present.

Rogen reports that at the meeting Sandra Morris, a member of the Racine County Republican Party’s election integrity committee claimed, “People committed treason in this election. It seems like people committing the crimes never serve time … I want to make sure people pay a price. I don’t want window dressing.” She later told the newspaper she would not believe there was no foul play unless they could seize election materials and machines.

With Vos having moved from backing election “reforms” that would make it harder to vote in the future, to his lunge toward the far-right, full-embrace of Trump, is there really much difference left between Team Brandtjen and Team Vos?

Vos has argued that his Gableman-led investigation is different because it is not seeking to predetermine a certain outcome: one determined to find fraud. However, Gableman made public statements that he has since tried to walk back that the election was stolen, accusing “bureaucrats” of having “stolen our votes.” Additionally he attended a recent conspiracy-fueled circus put on by the discredited MyPillow CEO Mike Lindell and went to Arizona to check out its audit overseen by Cyber Ninjas, a trip also made — with Vos’ approval — by Brandtjen and other legislators..

“I think we can argue here that the speaker’s audit is also predetermined to find a certain outcome,” says Spreitzer.

Speaking with reporters on Monday, Gov. Tony Evers expressed his disgust at both GOP audit attempts calling them “outrageous,” “a lot of wasted money” and indicating that when Vos flew to the Alabama rally and posed for a photo with Trump, the audits became unified from his vantage point:

“Things changed a bit when Robin Vos went down and visited Donald Trump and they took a nice picture on the plane,” said Evers. “Apparently they’re all drinking the Kool Aid.”

Evers also views the outcome as predetermined — an attempt to demonstrate fraud that has been proven multiple times never to have occurred. He added of the committee vote giving a blank check to the person who leads the investigation, “I think it’s really, really unfortunate. What it tells me is that person is going to be wide ranging … and they’re going to be coming up with all sorts of things that just frankly aren’t true.

“We had a fair election as last time. Joe Biden is the president and the continued attack on our democracy is just absolutely ridiculous. In my wildest dreams, when I decided to run for this office, I never thought protecting democracy would be one of the key things we’d do.”