Why Is State Supreme Court So Angry?

There are certain themes that commonly appear in the decisions, and dissents, of three members of the Wisconsin Supreme Court. To illustrate, I will look at three cases:

Time and again the three justices latch on to a sentence from Justice John Marshall’s decision (in 1803) in Marbury v. Madison: “It is emphatically the duty of the Judicial Department to say what the law is.” After over two hundred years, these words seem noncontroversial. After all, Marbury v. Madison is considered foundational to the American legal system. Why the obsession with them?

There seem to be two explanations. One is that the three judges resent what they see as state regulatory agencies as trespassing on territory that rightfully belongs to them. Here is Rebecca Bradley concurring in the Koschkee case:

… we ended our practice of deferring to administrative agencies’ conclusions of law,” thereby reclaiming the judiciary’s constitutionally-vested authority to say what the law is. … Rather than placidly accepting the administrative state as a necessary appendage to the government, this court should reconsider its acquiescence to subdelegations of legislative power to administrative agencies within the executive branch when the appropriate case presents the opportunity.

Or consider Roggensack’s take in Trump v. Biden on advice from the Wisconsin Elections Commission:

This attitude, if adopted by a majority of the Supreme Court, would create an impossible quandary for state officials who are charged with managing elections, as an example. Whatever decisions they make are subject to the court’s second guessing when challenged by a losing candidate. The three justices seem quite comfortable with throwing out votes if they disagree with elements of the election’s design.

Some may suggest that the answer may lie in asking the courts for a pre-election advisory opinion from the course, thus avoiding a post-election surprise. Unfortunately, this solution runs up against the U.S. Constitution itself. The Constitution says it extends judicial power to cases and controversies. The courts have long concluded that this wording rules out advisory opinions. Only actual cases and controversies with parties with a real stake in the outcome need apply.

The second reason seems to be irritation that their colleagues are failing in their duty to say what the law is. Here is Rebecca Bradley in Trump v. Biden:

I dissent because, once again, this court abdicates its responsibility to “say what the law is.” … It is our solemn judicial duty to say what the law is. The majority’s failure to discharge its duty perpetuates violations of the law by those entrusted to administer it.

In her own dissent, Ziegler picks up the same theme:

Under this view, one of the primary purposes is to develop the law. Thus throwing out a case because a party lacks standing or because it is brought too late, disappoints because it avoids an opportunity to “say what the law is.”

Chief Justice Marshall, in Marbury v. Madison makes it clear that saying “what the law is” is not an end in itself. Instead, it is a tool to help resolve the case or controversy:

It is emphatically the province and duty of the judicial department to say what the law is. Those who apply the rule to particular cases, must of necessity expound and interpret that rule. If two laws conflict with each other, the courts must decide on the operation of each.

In recent years, opposition to the so-called “regulatory state” has become a cause particularly among some right-wing law professors. One of their prime complaints is that regulators are not elected. Rebecca Bradley (dissenting in Trump v. Biden) picks up on this.

Rather than fulfilling its duty to say what the law is, a majority of this court unconstitutionally converts the Wisconsin Elections Commission’s mere advice into governing “law,” thereby supplanting the actual election laws enacted by the people’s elected representatives in the legislature and defying the will of Wisconsin’s citizens.

When the state’s highest court refuses to uphold the law, and stands by while an unelected body of six commissioners rewrites it, our system of representative government is subverted.

She picks up much the same theme in Stempski, the recent challenge to the Dane County mask requirement:

Without offering any explanation to the people of Wisconsin who elected them, a majority of this court shirks its institutional responsibility to decide yet another case alleging an unlawful deprivation of liberty.

In regard to the same case, Ziegler opines:

Respondents argue that local health authorities, who are unelected and largely shielded from democratic accountability, have authority … to regulate across wide swaths of society the personal decisions of those engaging in public life.

A majority of this court seems to have forgotten a fundamental first principle of government: all government officials work for We the People and must remain answerable to the citizens if our constitutional republic is to survive.

The graph below summarizes a Marquette poll from last fall that asked whether respondents supported a requirement that masks be worn in public places. The percentage of those supporting the requirement is shown in green; those opposed in red. Note that a majority of all groups—other than Republicans who were basically tied—supported the requirement.

“MSN” includes Dane County and ten surrounding counties. Slightly more than half of the MSN population live in Dane County. It appears that the “unelected” Dane County health department reflects the sentiments of her constituents, who overwhelming supported a mask mandate, much better than do the three justices. 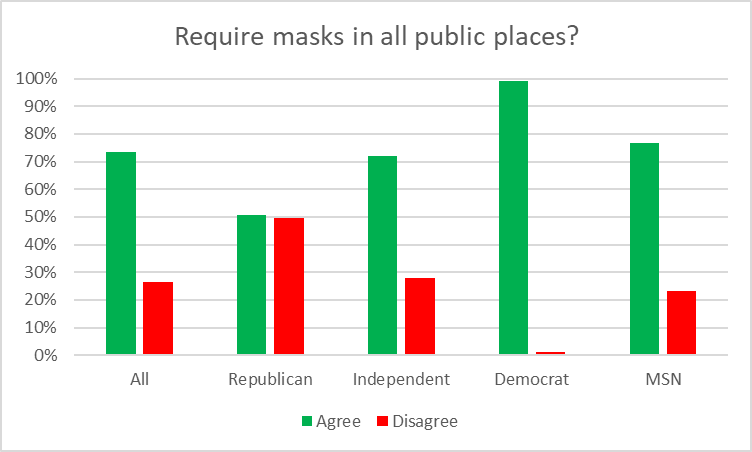 Require masks in all public places?

Not to mention that the Dane County health board includes elected officials and other members appointed by duly elected office holders operating under state law. Similarly, the Wisconsin Elections Commission has members appointed by elected officials and operating according to state statutes. It can be argued that the hostility of the three dissenting justices to regulators creates a danger to democracy, particularly if they are joined by others with the same viewpoint. (They typically were joined by Justice Dan Kelly, who was defeated in 2020, and have sometimes gained the vote of Brian Hagedorn who, however, does not seem to agree with their aggressive use of Marbury to “make law.”) The three justices’ apparent willingness to go along with the Trump strategy to throw out votes in Milwaukee and Madison may encourage other defeated candidates to try to snatch victory from defeat by convincing a judicial majority that an election was mismanaged.

Since the coronavirus arrived in Wisconsin it has killed over 8,000 Wisconsinites. Some of that number can be chalked up to the state Supreme Court’s hostility to public health regulators and measures aimed at controlling the virus.

5 thoughts on “Data Wonk: Why Is State Supreme Court So Angry?”