Do The Beerline Shuffle

Plus, a Mexican Fiesta at the Summerfest Grounds, WMSE's Backyard BBQ, Milwaukee Fringe Fest and Music on the Beerline. 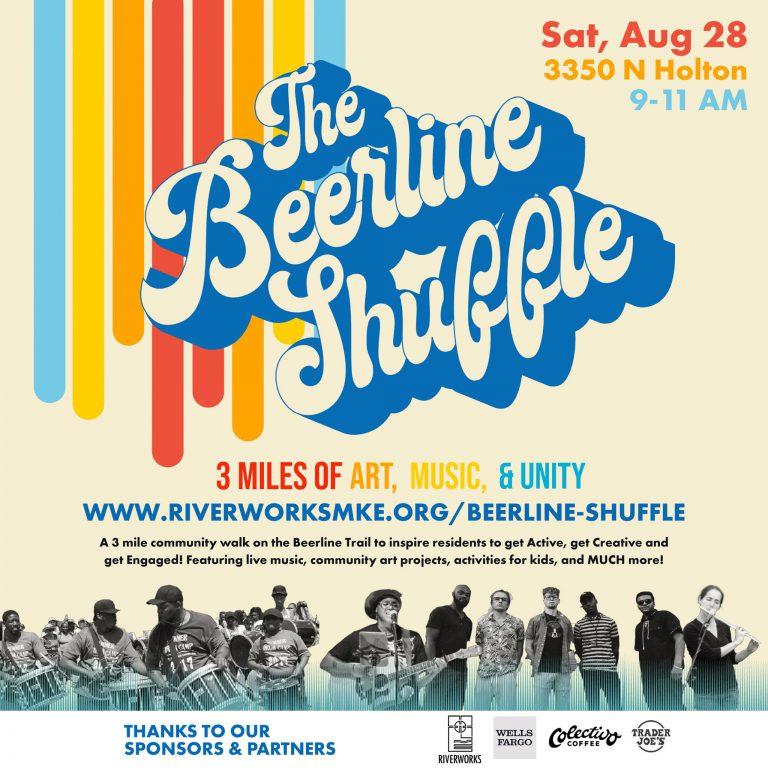 The Beerline Shuffle hosted by Riverworks.

Even though the State Fair just ended and Summerfest is still a week away, there’s still plenty of live music to be had in Milwaukee. Also, its your last chance to check out the Lakeside at Milwaukee Art Museum events. WMSE is belatedly celebrating its 40th Anniversary, which was last year, with its annual Backyard BBQ event. The Beerline Trail is getting some love this weekend with live music performances and an art walk exploring the Riverwest and Harambee community art installations.

August 27: Music on the Beerline

Riverworks MKE is hosting its third annual Music on the Beerline event, a single day filled with local music that takes place on The Beerline Trail behind the Family Dollar on N. Holton Ave. The goal of the event, according to Riverworks’ Community Creative Placemaking & Economic Development Coordinator Rosalyn Wolfe, is to “create real community connections through the collective love of music.” This year’s lineup will bounce between genres like hip hop, country and folk; featuring performances by Orlando Pena, DJ DRiPSweat, Anthony Deutsch, Ms. Lotus Fankh and Alyssia Dominguez. The event will also be hosted by Ray Nitti. It begins at 5 p.m. and is free to attend.

Celebrate the culture, music and cuisine of Mexico in a weekend-long event on Milwaukee’s lakefront. The event is not only an excuse to enjoy delicious food and hear great music, its an educational experience aimed at lifting up Milwaukee’s Hispanic community, while sharing that culture with people from all ethnic backgrounds. The festival will take place at Henry Maier Festival Park, 200 N. Harbor Dr., and will run from noon to midnight each day. To purchase tickets, click here. For more information on entertainment lineups, click here.

WMSE is celebrating 11 years of its Backyard BBQ event — a day filled with local food and local music. The event is also a celebration of the independent radio station’s 40th anniversary, a milestone that it achieved last year during the shutdowns. The lineup for music includes De La Buena, Stephen Hull, Rexxx, Vincent Van Great and Abby Jeanne. The event is free and will take place at Humboldt Park in Bay View from noon to 8 p.m.

Skyline Music, returns to Kadish park for a single day as a family-friendly event perfect for picnics. Rather than a recurring weekly event, Skyline Music is instead featuring four acts throughout a single day, including performances by James Dallas, Betsy Ade & the Well-Known Strangers, the Kal Bergendahl Project and the Extra Crispy Brass Band. Food trucks will be on site for those who don’t pack their own lunch. The event is free and will begin at 12 p.m. and the last band goes on at 6 p.m.

The Riverworks Development Center is putting on its first ever Beerline Shuffle event, which explore the various community art installations featured on the Beerline Trail in both Harambee and Riverwest. The walk will begin and end at the Beerline Plaza located at 3350 N. Holton St., and will arrive back in time for the MKE Black Food Truck Marketplace event. The Funk Wagon, which features a group of Milwaukee musicians, will provide entertainment alongside the shuffle. The event will cost $15 and will run from 9 a.m. to 11 a.m.

The Marcus Center for the Performing Arts is hosting MKE Fringe Fest back for its fifth year. Fringe Fest features local and regional acts taking to the Peck Pavilion stage, which has recently received a makeover. Performances will include a mix of visual art, theater, music and dance. A few vendor tables will sell their art and goods as well. For those who can’t make the performance, a virtual version of the festival featuring a different lineup is also available. For more information on lineups, click here.