By Laurel White, Wisconsin Public Radio - Aug 17th, 2021 04:15 pm
Get a daily rundown of the top stories on Urban Milwaukee 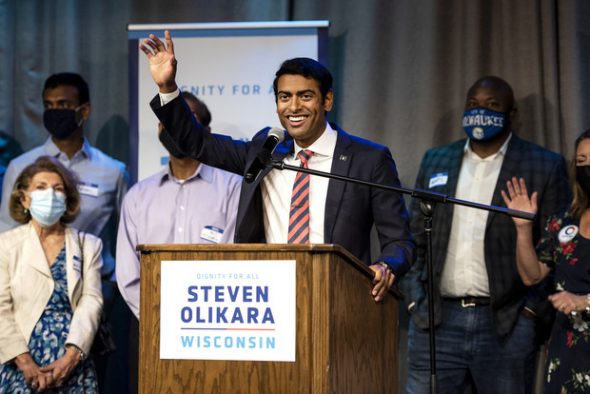 Johnson hasn’t yet said if he will seek reelection in 2022.

Olikara, 31, is the founder of the Millennial Action Project, a national nonprofit that aims to bridge partisan divides through work with young policymakers. Olikara has also advocated on issues including workers’ rights and climate change and worked with a bipartisan group that promoted in-person and absentee voting during the COVID-19 pandemic.

A Milwaukee-area native and University of Wisconsin-Madison graduate, Olikara announced his campaign at an event in Milwaukee at No Studios, an art studio and co-working space.

During his speech, Olikara said he would pursue bipartisan policy solutions in Washington.

He also spoke about his support for legislation that would combat climate change and gun violence and expand disability and voting rights under federal law.

“It’s the easiest thing in politics right now, to just say what you’re against and just demonize other people,” he said. “The more important path for us to is say what we’re for.”

Olikara, who is Indian American, is the first candidate of Asian descent to enter Wisconsin’s 2022 Democratic U.S. Senate primary.