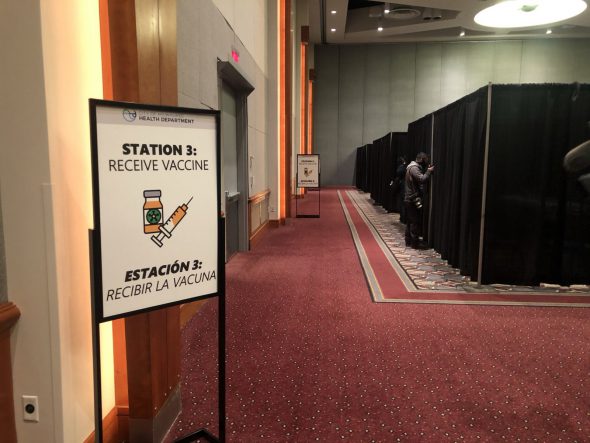 Increasingly, the response to COVID-19 has followed ideological and partisan lines. Measures to curtail the pandemic, most notably masks, social distancing and vaccination, face considerable opposition from Republican politicians and many rank and file. Thus many conservatives are working against their own interests and supporting leaders who put them at risk of sickness and death.

Partly the explanation to this puzzle is that many Republicans and conservatives have abandoned the mainstream press for alternative media that are careful not to challenge their beliefs. One of the most successful of these is The Daily Wire. An NPR analysis of social media data found that stories published by the Daily Wire received more likes, shares, and Facebook comments than any other news publisher by a wide margin, including The New York Times, The Washington Post, NBC News, CNN and Fox News.

The Daily Wire claims to “provide truthful, accurate and ethical reporting,” thus avoiding the most extravagant claims of the right-wing blogosphere, such as the claim that the vaccine includes a chip to track the recipient. Yet the stories published by The Daily Wire are likely to reinforce the proposition that masks and vaccinations are a threat to freedom. The cumulative effect may be no different than the less plausible claims by other members of the right-wing blogosphere.

Here are COVID-19-related headlines from two days of the Daily Wire in early August: “Rogan Blasts Vaccine Passports” and “People ‘Don’t Understand History,’ ‘One Step Closer To Dictatorship’” in which Joe Rogan claims that vaccine passports would push the U.S. “one step closer” to being a “dictatorship.”

Nowhere is there any sense that avoiding the vaccination brings real costs to both the individual and society.

As shown in the graph below, comparing the 2020 presidential vote to the average number of new COVID-19 cases daily for each of the 50 states. The horizontal axis shows Joe Biden’s portion of the two-candidate vote. The vertical axis shows the average daily rate of new cases per 100,000 people in the state.

Although the chart below shows considerable scatter, particularly among the Republican dominated states. The scatter is reflected in the quite small R2, typically interpreted as the percentage of variation explained by the trend line, in this case about 13%.

It is notable that the nine states with the highest per capita number of new cases were all won by Donald Trump. Strikingly, Republican office holders, such as Florida Governor Ron DeSantis, seem to pay no price for their failure to protect their constituents from the pandemic. 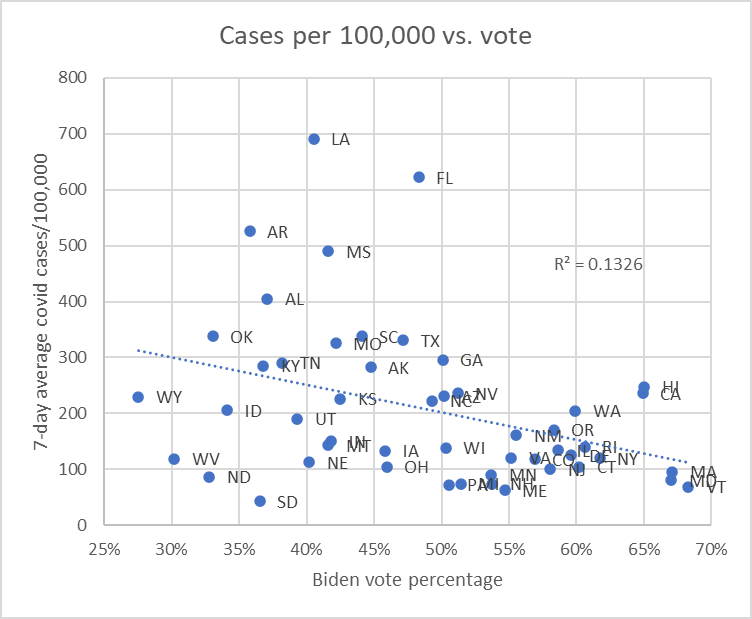 The next graph compares the 2020 vote to the daily number of COVID-19 deaths per million people in each state. As with cases, the states with the highest death rates voted for Trump.

A simple explanation for this is that the higher vaccination rates in the Biden-supporting states gives them two advantages: a lower infection rate and less serious symptoms for those who do get infected but are fully vaccinated, the so-called “breakthrough” cases. 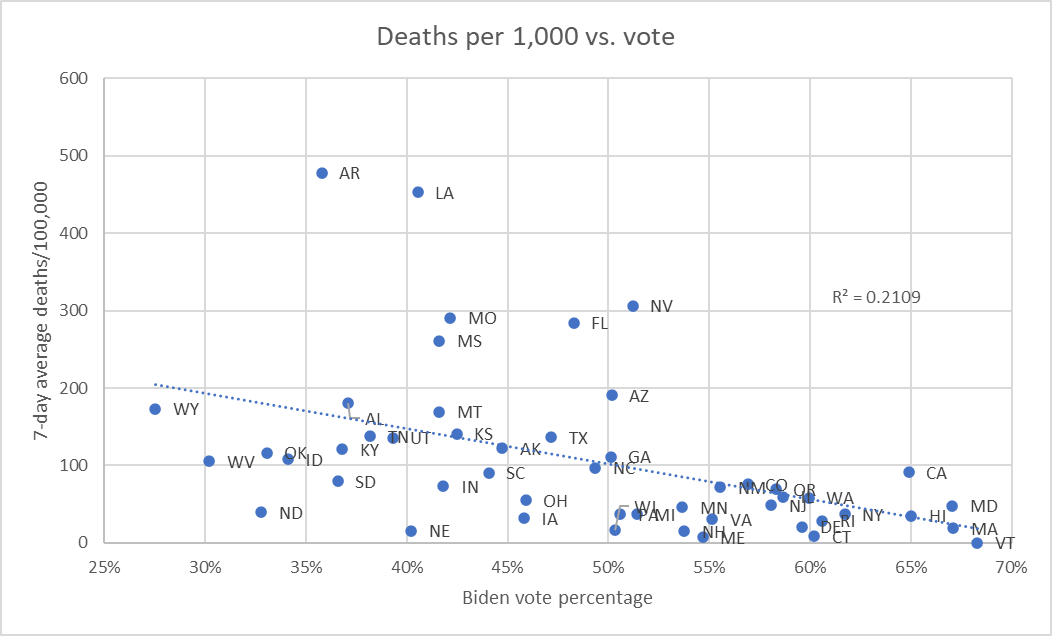 The obvious reason for the better performance of Democratic states is the percentage of the population that is vaccinated. The next chart compares the average daily number of cases per 100,000 people to the percentage of people who have received at least one shot.

Note that the percentage of variation explained by the model has risen to almost 35%. There is still considerable scatter, especially among Republican states. But overall, people are less likely to be infected by COVID-19 in states with high vaccination rates. 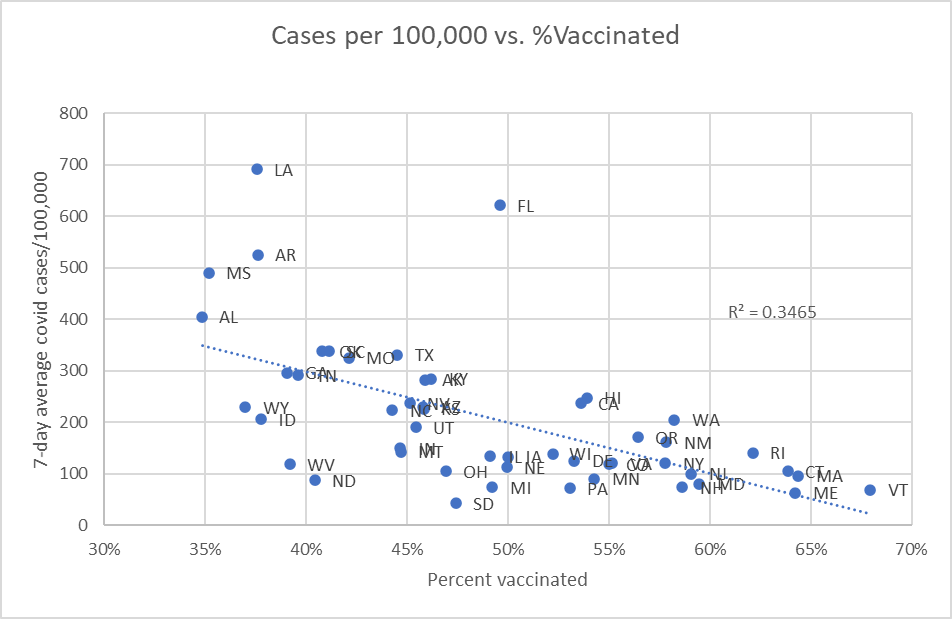 The next graph compares deaths to the percentage of the populace who have at least one shot. Around 40% of the variation is explained by the trend. 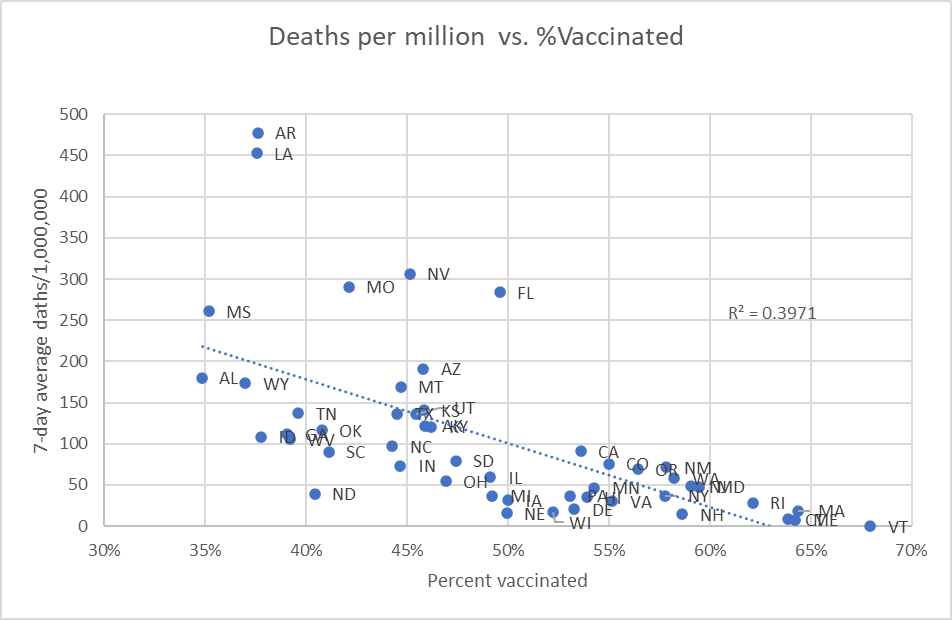 Deaths per million vs. percent vaccinated

Overall, states in the North East and New England performed quite well. In fact, no one died in Vermont in the most recent week.

North Dakota, despite its low vaccination rate and a governor opposed to any measures to control the virus, performs quite well. (Last fall, the Dakotas had the highest per capita daily cases rate, followed for a time by Wisconsin.) In an effort to arrive at an explanation, I postulated that perhaps there was a “Great Plains” phenomenon. Perhaps states with low population densities had an advantage—that it was easier for residents to avoid transmitting the virus.

The next graph tests the hypothesis that there is some low-population advantage. As the chart below shows, the data do not support this theory. 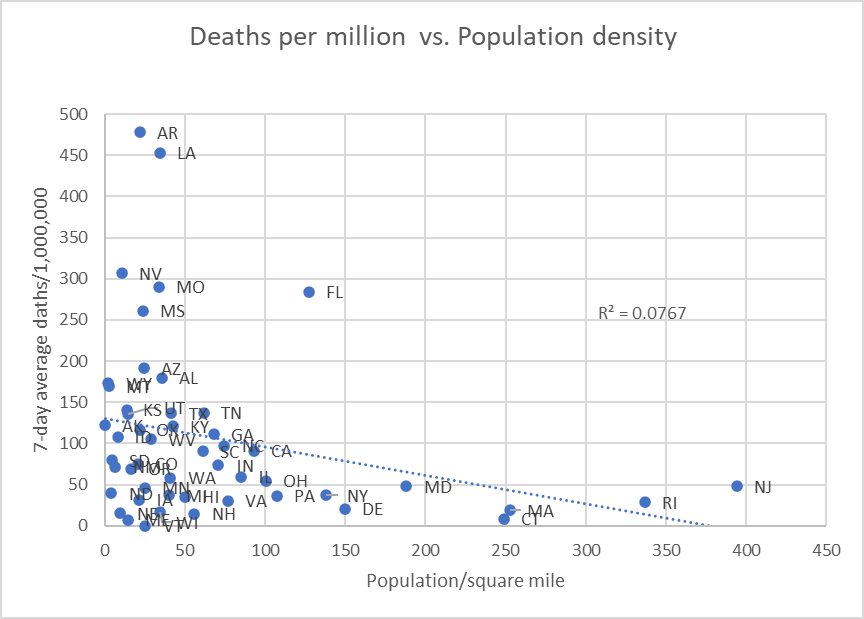 Deaths per million vs. percent density

The next graph ranks the states in decreasing order of death rates from COVID-19, based on the first week of July. States supporting Trump are shown in red; those voting for Biden are in blue. Although there are exceptions, red states as a group lead the way with the highest death rates. Assuming this pattern continues into the future, residents of red states will pay a high price. 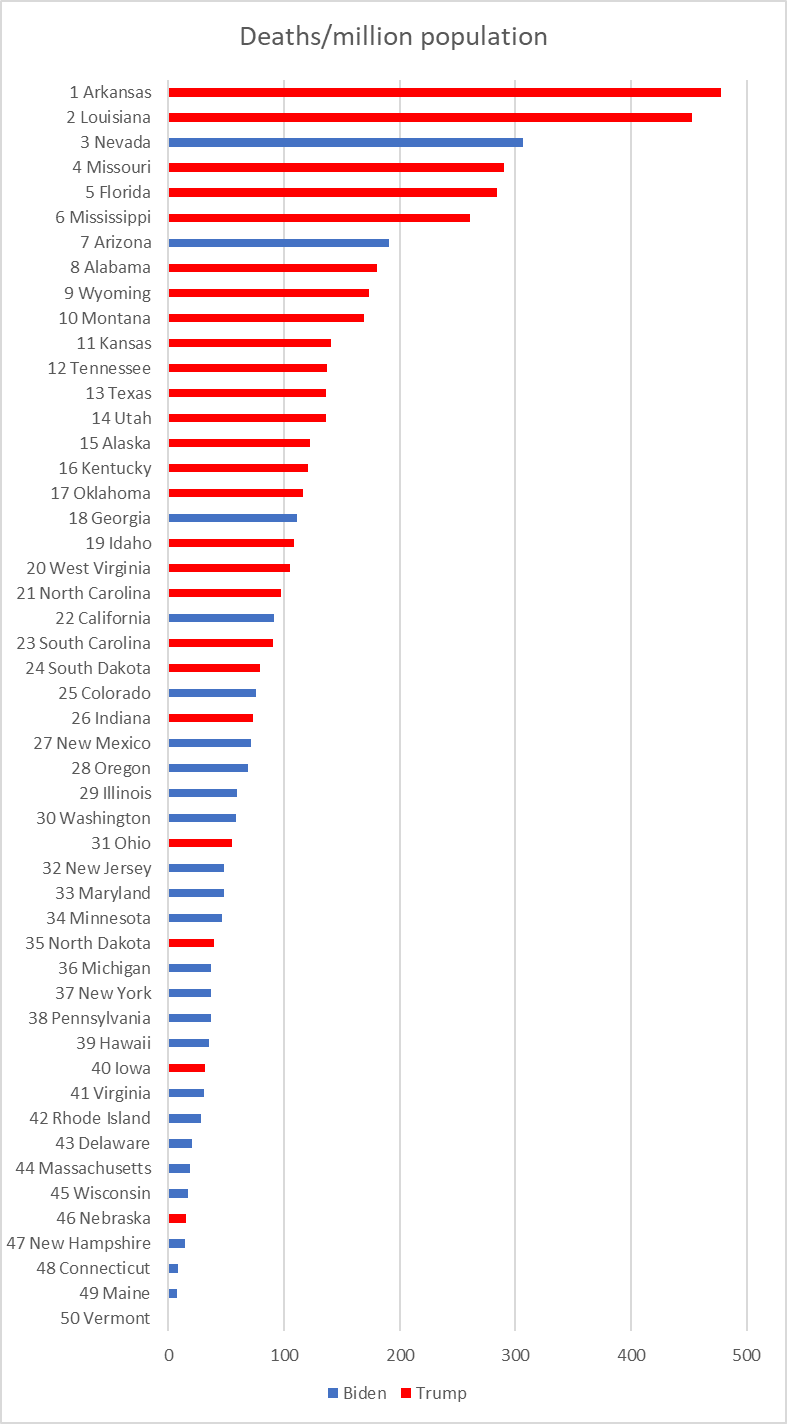 Clearly, Republican states and their residents pay a price for their prevailing view of vaccinations against COVID-19. But rather than pay a political price, their politicians seem to benefit. For example, Florida’s governor Ron DeSantis is widely viewed as a potential presidential candidate.

Overall, Wisconsin, despite its middling vaccination rate, is doing surprisingly well when it comes to COVID-19 cases and deaths. This is illustrated by its 45th ranking in its number of deaths per million Wisconsinites, as shown in the graph below. But there is a real danger of complacency. Along with most other states, the number of COVID-19 cases in Wisconsin has risen over the past two weeks.