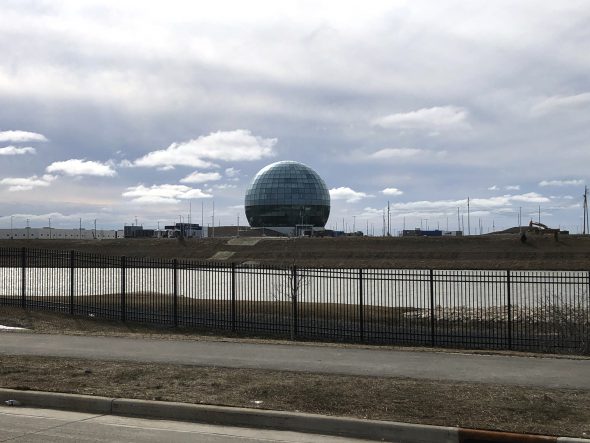 A proposal to use the mostly-vacant Foxconn campus for an electric car factory appears to have hit a snag. And it relates to a 1930s law relating to who can sell vehicles.

California-based electric car startup Fisker Inc. announced in February that Foxconn would build its first new vehicles without saying where. But Foxconn confirmed in March it is considering using its approximately 1,000-acre “Wisconn Valley” site in southern Racine County.

In April, Foxconn accepted a renegotiated agreement with the Wisconsin Economic Development Corporation that cut its potential tax credit award from $2.85 billion to $80 million. In exchange Foxconn’s hiring and investment targets were cut from 13,000 employees and $10 billion invested to 1,454 workers and $672 million invested. The new agreement also struck the requirement for Foxconn to build a Generation 10.5 LCD manufacturing facility, something the company abandoned shortly after the proposal was first announced in 2017. The credits remain refundable, effectively a cash payment award to the company.

By May, Fisker said the selection process was down to four sites, including Wisconn Valley. Known as Project PEAR (personal electric automotive revolution), the company aims to produce a five-passenger vehicle with a starting price below $30,000. A design has not been revealed.

Wisconsin’s franchise dealer law requires that automotive manufacturers use franchised dealers to sell their vehicles. Originally created in the 1930s, the law has stymied electric car company’s Tesla’s efforts to sell vehicles directly. Tesla operates a service center in Wisconsin, but customers looking for a new vehicle must buy one in states that allow direct sales, including Illinois.

The Wisconsin Automobile & Truck Dealers Association staunchly opposes a change. It says competition is formed by having different dealers selling the same vehicles. Governor Tony Evers vetoed an amendment to the 2019-2021 state budget that would have allowed direct sales. Evers called it a “payoff” to secure the vote of Republican senator Chris Kapenga, who admitted he requested the provision. Kapenga owns a business that sells Tesla parts and rebuilds the vehicles.

But Evers, in 2019, signaled he was open to stand-alone legislation to change the law.

WEDC, led by Evers’ appointee Missy Hughes, would likely also need to approve a new subsidy agreement with the Fisker-Foxconn joint venture. WEDC declined to comment on any negotiations in July. “WEDC’s policy is not to comment on any discussions it may or may not have with a business unless and until a contract is executed,” said David Callender, spokesperson for the WEDC, in a comment to Urban Milwaukee.

Fisker wants to start production of the vehicles in late 2023.

Fisker is already developing a separate vehicle, a crossover sport utility vehicle known as the Ocean, with Magna Inc. It will be built at Magna’s plant in Graz, Austria.

Regardless if an automotive factory is built at the site or not, a $791 million tax incremental financing district remains.

The state remains on the hook for at least 40% of the local infrastructure costs if Foxconn walks away from an agreement with local governments to pay property taxes based on the original estimated value of its Mount Pleasant manufacturing campus. That agreement would allow Racine County and the Village of Mount Pleasant to recoup costs associated with the tax incremental financing district used to build local roads, sewer and water infrastructure. Foxconn is scheduled to start paying at least $31 million annually in property taxes in 2023, regardless of its actual property assessment.

4 thoughts on “Back in the News: Fisker Wants State Law Changed For Potential Foxconn Car Factory”