How Ace Boxing Club Keeps Youths on the Right Track

The club's motto: "Better to sweat in the gym than to bleed in the streets."

By Edgar Mendez, Milwaukee Neighborhood News Service - Aug 8th, 2021 10:25 am
Get a daily rundown of the top stories on Urban Milwaukee 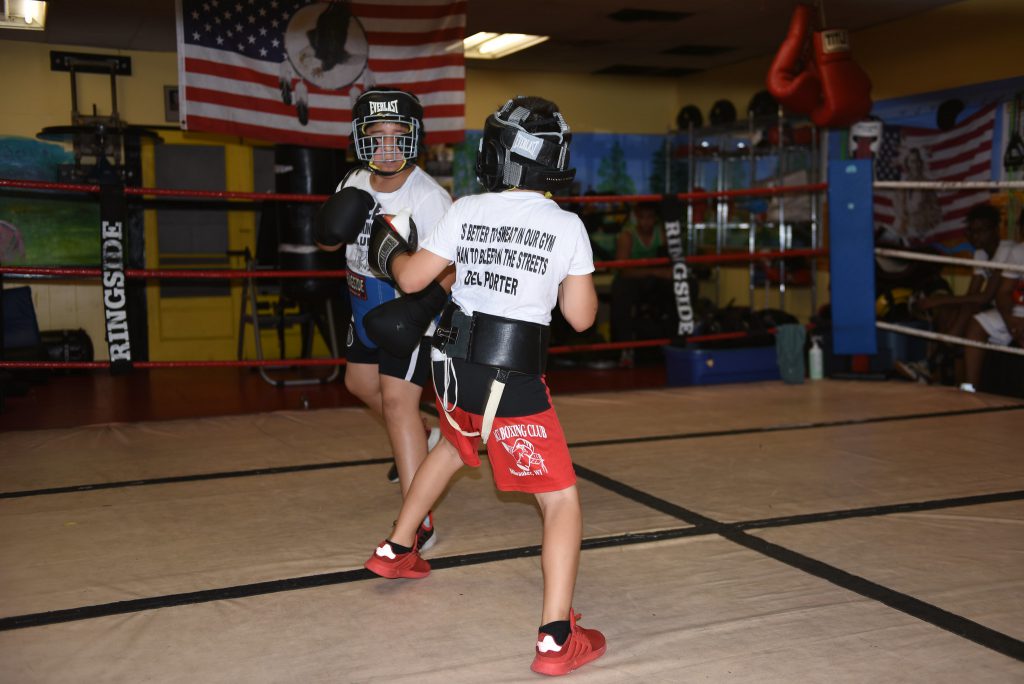 Members of the Ace Boxing Club spar as part of a weekly fundraising event. Photo by Sue Vliet/NNS.

On the western edge of Kosciuszko Park, called Kozy Park by locals, sits a windowless, maroon and cream-colored building that’s clearly seen better days. Keep walking and behind the weeds, you’ll eventually find a large banner that says: “It’s better to sweat in the gym than to bleed in the streets.”

Del Porter, a Golden Gloves champion in the 1950s, founded Ace in 1960 to give young people in the neighborhood something positive to do, according to his son, Frank Porter. When the beloved trainer died after a long bout with cancer in 2008, his son took over and has run the club ever since.

Porter still repeats his father’s mantra often. Unfortunately, he said, it hasn’t lost its relevance over time in Milwaukee, where a record-high 189 homicides occurred in 2020 and a similar pace continues this year.

“We’re all from the inner city, and the majority of us got food stamps and FoodShare cards and struggled,” Porter says. “But the club provides a safe place for kids like that and a place for them to learn how to make positive changes and avoid the streets.” 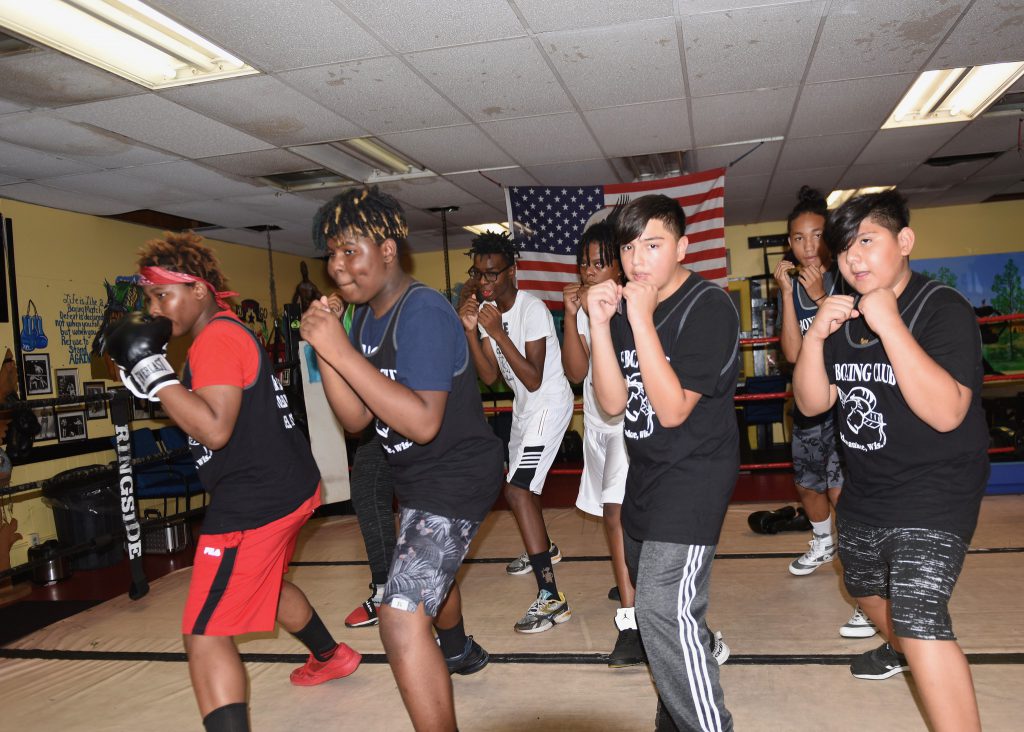 Before the pandemic, Ace Boxing Club, which is a nonprofit, served 300 youths a year, although current guidelines have placed limits on its capacity. Some kids join because they want to keep healthy and get out of the house, while others come because they want to make changes in their lives.

“I used to get in trouble all the time and get into fights,” says Cam Wilson, 13.  “But now I can control it, and I just hit the [punching] dummies instead.”

His father, Si Wilson, a former boxer himself, has witnessed his transformation.

“I’ve seen his anger and how he would get suspended for fighting, go back to school and get in trouble again the same day,” he says, while clutching his 1-year-old daughter Zaleyah at ringside.  “Being in this club has taught him to humble himself and, since then, he did a complete 360.”

Genesis., a 9th grader, wanted to gain confidence after being bullied at school.

“I’m a bit of a weird, awkward kid,” Genesis says, as he stood in the beige boxing ring that’s crisscrossed with black tape. “We support each other here, and that’s helped me a lot. I’m not scared anymore.” 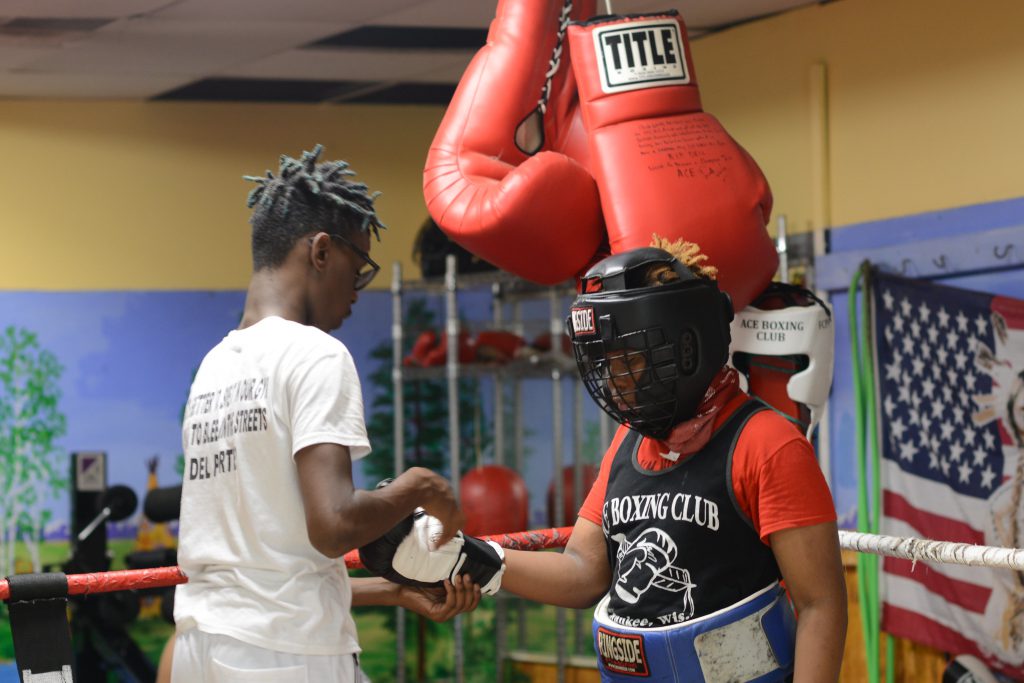 More than about boxing

Genesis says training with Porter has helped him build character, and although he knows how to box now, his coach taught him to use those skills only to defend himself.

Heidi Keaton, a familiar face at the club, says she met Porter several years ago when her son Alex started boxing there.

“He is really good with the kids, and he really cares about them,” she says. Alex, now 19, joined the club at 13 but quit for several years after his father, Eddie Keaton, died.

But about a year ago, he realized that something was missing in his life. That something was the Ace Boxing Club and the tutelage of Porter. Now that he’s back, he is happy to see youngsters learn lessons that helped him during his first go-round.

“The mission of the club, to keep kids off the street and learn discipline, that’s even more important than the boxing,” he says.

“It’s kind of weird being the only girl, but I like it,” says Olivia, as she prepared to spar with  one of her teammates. “I like meeting people and training, and it helps me focus in school.” 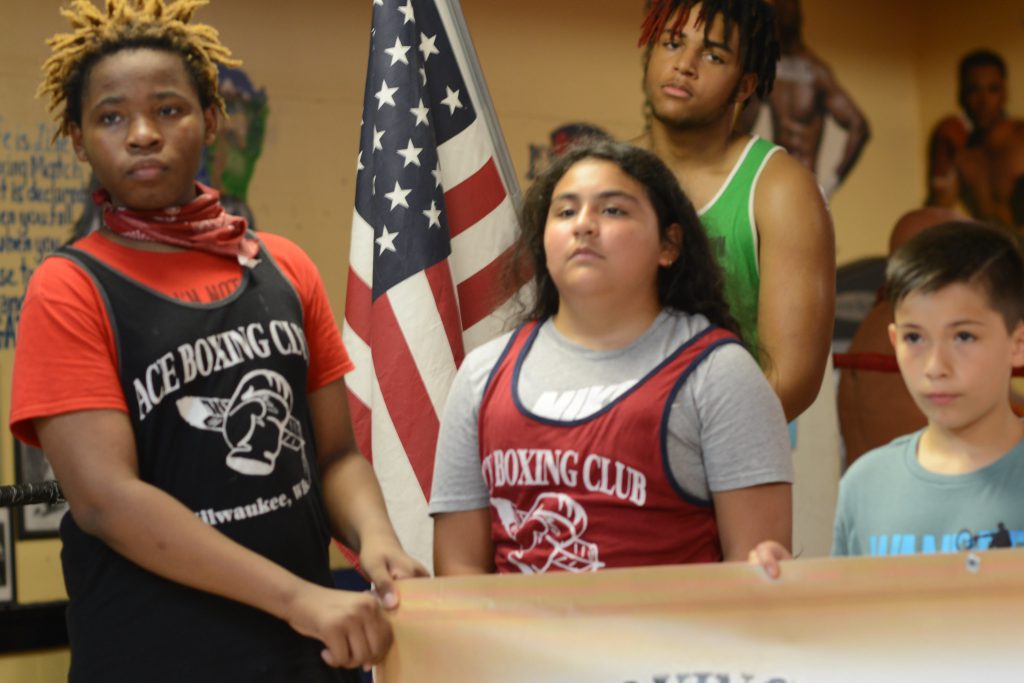 Boxers listen attentively to instructions from their coach. Photo by Sue Vliet/NNS.

The club, which serves anyone ages 8 and older, is open from 4 p.m. to 6 p.m. on weekdays and from 10 a.m. to noon on Saturdays. Each day begins with the Pledge of Allegiance before Porter asks his young pugilists to bow their heads and think of something they are grateful for. Then he asks the group, which is made up of many different races, to look at each other.

“This is what heaven will look like,” says Porter, adding that one of his goals is to try to instill the values of diversity and inclusion.

Then they get to boxing.

“Forward, forward, back, back, left in line,” shouts Porter as the youths move in unison. “Jab, jab, follow up with the left.”

Porter says the club teaches young people the importance of healthy habits, teamwork, self-control, loyalty and how to refrain from violence.

Past members of Ace Boxing Club have served in the military while others have even become police officers and firefighters, Porter says. 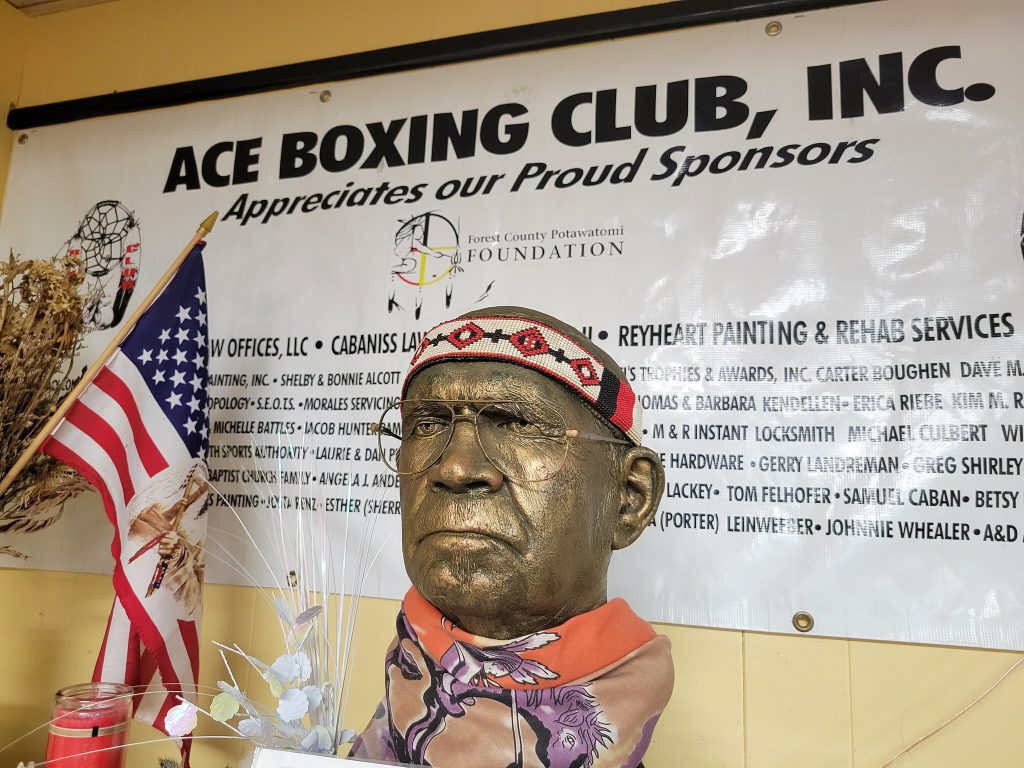 Ace Boxing Club has been at its current location for around 30 years, Porter says. The building, much older than that, was renamed the Del Porter Pavilion in honor of the club’s founder in 2007, a year before his death. It is the first Milwaukee County building to be named in honor of a Native American.

The inside of the club has similarities to the outside: cluttered and weathered, but not without its character. Secured from the ceiling are oversized gloves and speed and punching bags. Overlooking the club from the top of one shelf is a bronze bust of Del Porter, who sports a beaded black, white and red bandana. Inside the shelf are eagle feathers, a shell containing sage and other tributes to him.

Perhaps the most important tribute is that the club is still running.

“This place has helped so many kids,” his son says. “Having this gym here has benefitted the whole community, and I hope it continues to do so for many years to come.”

Ace Boxing Club has never had paid staff and is run by volunteers. The public can help by sending donations.

“Every donation helps us support kids who can’t afford equipment,” says Porter, who suggests an annual contribution of $100. “No kid is turned away here.” 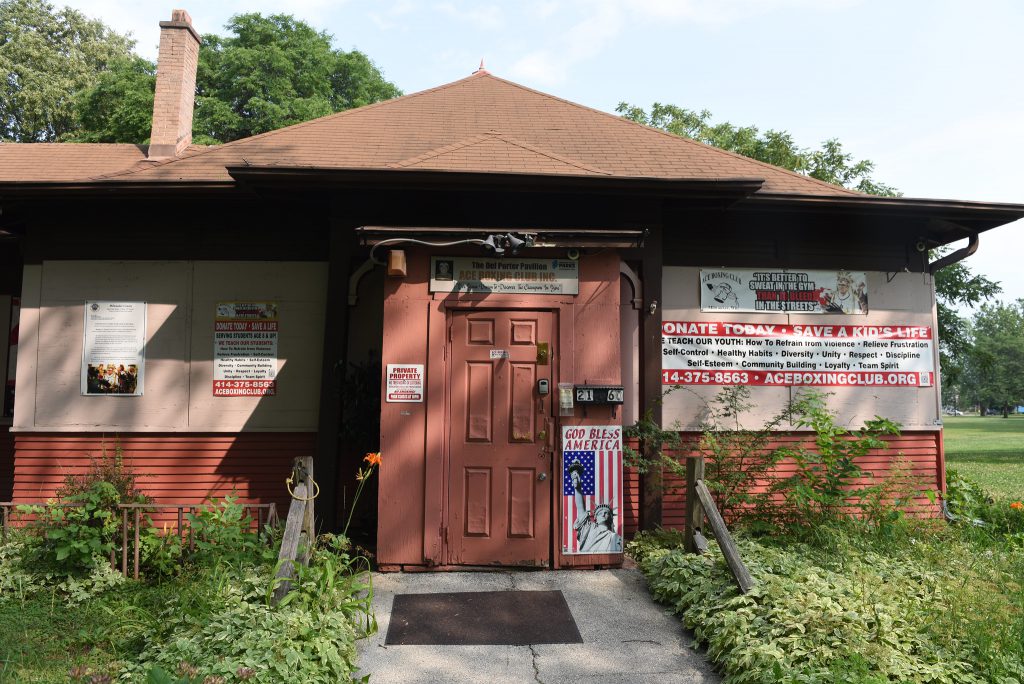 ‘Better to sweat in the gym than to bleed in the streets’: How Ace Boxing Club keeps youths on right track was originally published by the Milwaukee Neighborhood News Service.