Eight candidates remain in race, including Godlewski, Lasry and Nelson. 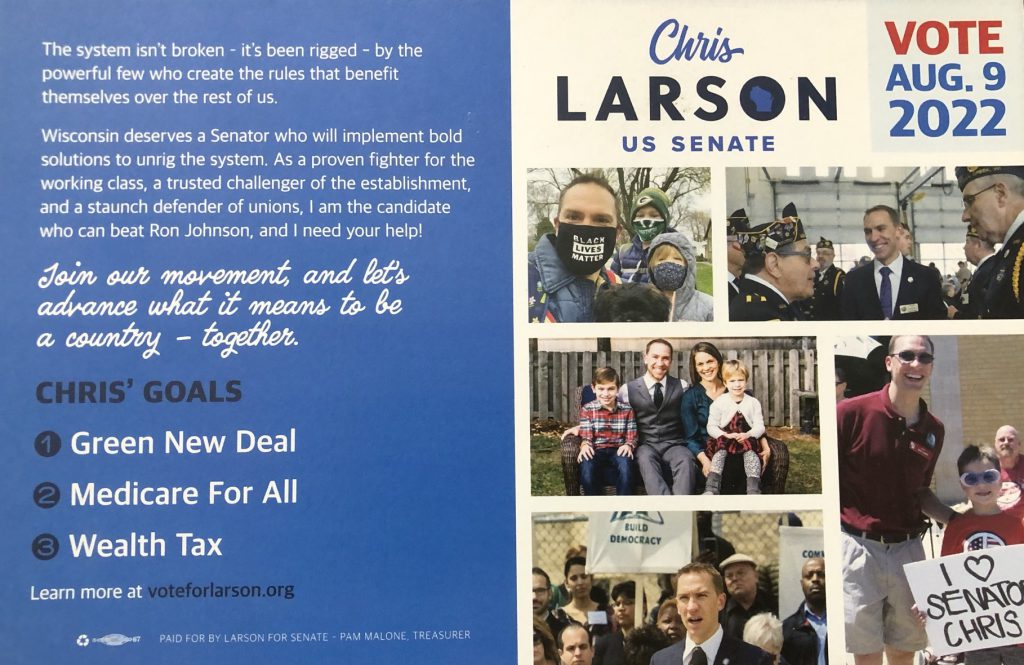 “Today I made the decision to suspend my campaign for United States Senate. While I won’t be the candidate who takes on Ron Johnson next fall, I remain as committed as ever to assuring his defeat and electing Democrats who will fight for progressive values up and down the ballot in 2022,” said Larson in a statement.

“Mandela is the candidate who is best positioned to defeat Ron Johnson and who Wisconsinites can most trust to fight hard in the Senate for bold progressive policies that benefit working families — ideas like Medicare for All, a job-creating Green New Deal to grow Wisconsin’s economy, and paying for big ideas by making the ultra-wealthy pay their fair share,” said Larson. “I know Mandela will never stop fighting to create opportunity for every Wisconsinite. We must do all we can to unrig the system so it works for everyone, not just the ultra-wealthy and Wall Street.”

The news didn’t take Barnes by surprise. He issued a joint statement with Larson announcing the news.

“I want to thank Sen. Larson for his support, and for the values and dedication to the people of Wisconsin that he brings to his work as a public servant. I look forward to working with him, and leaders across the state as we continue our fight for opportunity for every Wisconsin family, regardless of ZIP code,” said Barnes.

A poll of 766 likely Milwaukee County Democratic primary voters conducted in late July by Remmington Research Group showed Barnes leading at 39% and Larson in second with 15%. Approximately 29% of respondents were undecided. No other candidate had more than 5%.

Get a daily rundown of the top stories on Urban Milwaukee
Larson was actively campaigning as recently as Sunday, where he was spotted handing out literature at the Puerto Rican Family Festival at Wilson Park. Other candidates attended the event, including Alex Lasry.

Barnes is unable to simultaneously run for re-election as lieutenant governor, creating an opening for someone to run alongside incumbent governor Tony Evers. Evers does not get to pick his running mate and said last month he expects an open primary.

Larson’s senate seat, district seven, is up for re-election in November 2022 and the senator told Urban Milwaukee he is running for re-election, not lieutenant governor. The district includes Milwakee’s lakefront neighborhoods as well as the suburbs of St. Francis, Cudahy, South Milwaukee and Oak Creek and a portion of Franklin.

Larson’s senate campaign manager was Justin Bielinski, who successfully managed Barnes’ 2018 lieutenant governor campaign. But Bielinski, in a tweet the day Barnes entered the race, called Larson “the most progressive candidate in Wisconsin’s Senate race” and “someone who recognizes it’s not about him — it’s about what he can do to change lives for the better.”

Larson entered the senate race in late May.

Johnson has not yet committed to running for a third term, which could trigger an open Republican primary as well. But despite Johnson’s lack of a commitment, Democratic candidates continue to position themselves against him.

The primary is scheduled for August 2022.

One thought on “Larson Drops Out of Senate Race, Endorses Barnes”