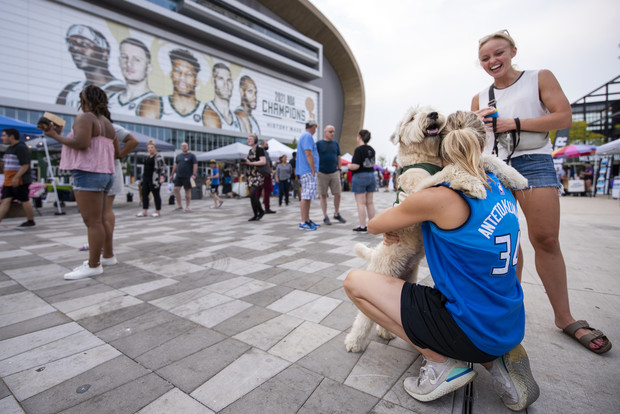 Mary Merg hugs her dog, Tucker, as they walk around the market Wednesday, July 28, 2021, at the Deer District in Milwaukee, Wis. Angela Major/WPR

The first Deer District Market Wednesday evening drew crowds and dozens of vendors downtown to the area around Fiserv Forum. The market’s organizer said he hopes the crowds will grow even as the Bucks championship energy wears off.

Attendees said, for now, there’s still plenty of excitement to go around.

“Based on the last year, there was so much uncertainty,” said Marit Gamberg, who attended the market with her family. “Just having such a positive experience as a city, it’s been pretty amazing, so we’re happy to be a part of it in the small way that we can be, which is just coming down and supporting local vendors and just being out here with the people we live with.”

“It’s just a nice thing to have in the summer to be outside and walk around, and especially with younger kids just show them kind of like what is available and just … see the bounty that is provided for us from the people who live near us,” said Gamberg.

Johnathan Dye runs Mr. Dye’s Pies, a bakery and pie shop that had a booth at the market. 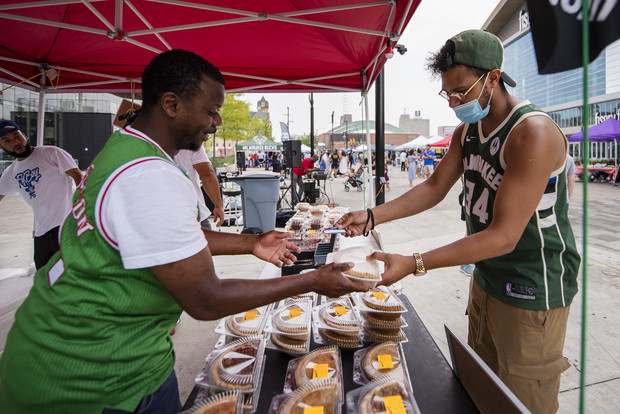 Quinnton Maney, right, an employee at Mecca Sports Bar and Grill near the Fiserv Forum, buys a pie from Mr. Dye’s Pies on Wednesday, July 28, 2021, at the Deer District in Milwaukee, Wis. Angela Major/WPR

“We’re standing on hallowed ground,” Dye said. “It’s awesome that this market is here, cool for the Bucks to make good on their promise to make sure this space was a community space, that it was for the people and not just during the Bucks season.”

Tomorrow we are on hallowed ground! It’s opening day for the new Deer District Market! 5pm to 9pm join us and these special Milwaukee businesses. Excited to be on board! Come kick off the next big Milwaukee thing! Thanks @Bucks Thanks Milwaukee #BucksInSix pic.twitter.com/5ErMqHk6cq

Dye said it was “a relief” to be doing business coming out of the pandemic.

“One of the most important things you need to do as a business is get in front of customers, and create those relationships,” said Dye. “I always tell my guys, ‘We’re just taking care of people. That’s all we are doing.'”

Arthur Ircink, who organized the market, said he wants to “be a champion” for the locally produced food coming out of Wisconsin. In addition to his work with multiple area farmers markets, he created the PBS program “Wisconsin Foodie.”

“I’m here to see Wisconsin grow and be put on the pedestal I feel it deserves to be on, because we’ve got some of the best food producers in the world here,” said Ircink.

Ircink said up to a couple thousand people attended the market. He said he thinks the momentum will build in the weeks ahead, even if COVID-19 continues to be a factor.

“I’m going to try to squeeze every last ounce of, like, people getting together and having a good time out before we have to, you know, something bad happens,” said Ircink.

Audra O’Connell is one of the owner-operators of Wild Child Farms in Waukesha, which brought jams, jellies and chicken and duck eggs, among other products. She said the event was their first time at a farmers market. 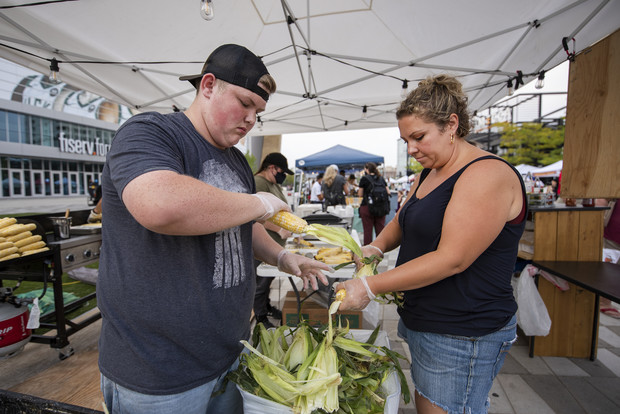 Ircink said while business was slow at times for vendors such as Wild Child Farms, he expects things to pick up as the weeks go on.

Ircink said the night market experience was a contrast from what he’s been used to.

“I felt like more people were gravitating to the food trucks and the ready-to-eat like snacky foods,” said Ircink. “They wanted to snack and they wanted to munch.”

He said the market also gives an opportunity to support businesses owned by people of color.

“You want to be able to support everybody, and I think our market has really taken a good first step,” said Ircink. “I think regardless of the Bucks or Fiserv or not, I think this would be a very successful market just because of the mix of people involved.”

The Deer District Market takes place from 5 to 9 p.m. most Wednesday nights until Sept. 15, with one final market date for the year set for Saturday, Sept. 25.