Parade will snake through Downtown en route to Fiserv Forum. 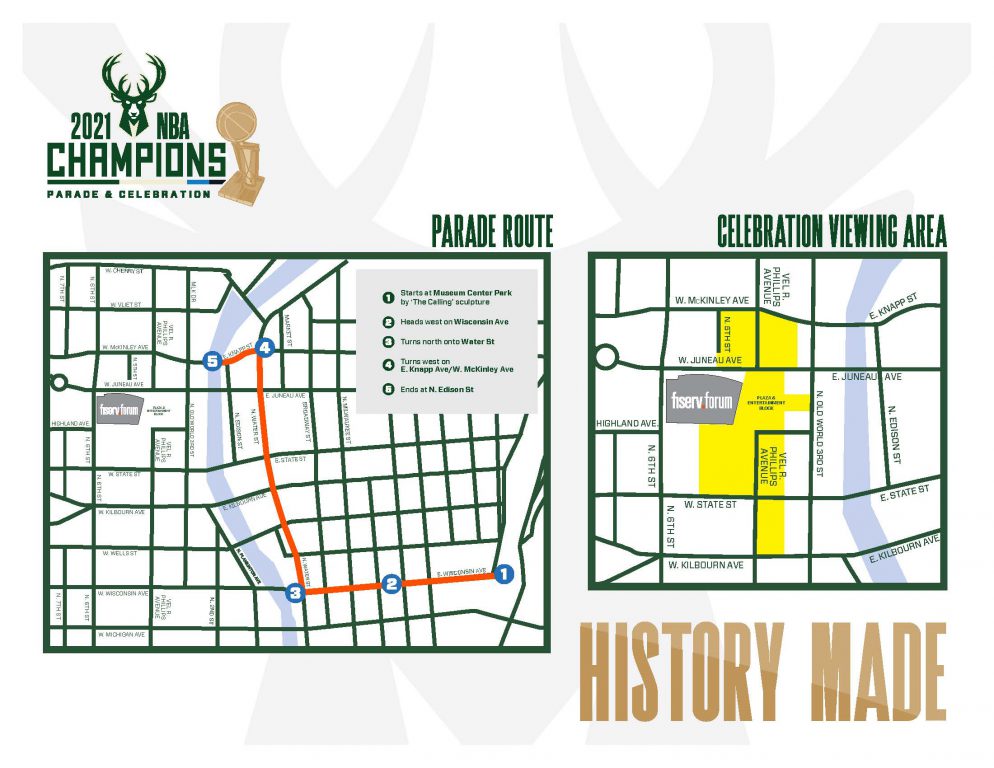 The Milwaukee Bucks are ready to roll through Downtown after rolling over the Phoenix Suns.

A parade to honor the team will run from near the lakefront to Fiserv Forum on Thursday.

Starting at approximately 11 a.m., the parade will set off from the eastern end of Wisconsin Avenue.

The participants will head west on Wisconsin Avenue, before turning north on N. Water St. and ending at E. Knapp St. The entire route is approximately 1.1 miles long.

A celebration is planned for the vacant lot owned by the team at 420 W. Juneau Ave., immediately north of Fiserv Forum. The stage, used for the official watch party Tuesday night, is located on the north side of the block.

The celebration event is expected to begin at 12:30 p.m. and is free to attend.

“This is a fantastic opportunity to come to the center of our city and honor the victorious Bucks,” said Mayor Tom Barrett in a statement. “The team has brought Milwaukee together in a special way, shining positive, worldwide attention on our community. This is a time to celebrate with enthusiasm!”

The city is asking parade attendees not to camp, place furniture or reserve space along the parade route in advance of the event. Street closures surrounding the route are expected.

Attendees are asked not to set up to watch the parade east of the pedestrian crossing where E. Wisconsin Ave. rounds the corner to become N. Prospect Ave.

“Tens of thousands of people who came Downtown Tuesday to celebrate the Bucks victory did so safely and respectfully,” Mayor Barrett said. “We are counting on everyone to continue reveling responsibly in the coming days.”

A specific guest for the parade was not released by the time of publication. The 1971 Bucks team, the last to win the title, did not receive a parade.

Expected to join the Bucks at the event are Barrett, Governor Tony Evers and County Executive David Crowley.

This article will be updated if more information becomes available.

One thought on “Bucks Parade Scheduled For Thursday Morning”