By Rob Mentzer, Wisconsin Public Radio - Jul 11th, 2021 01:31 pm
Get a daily rundown of the top stories on Urban Milwaukee 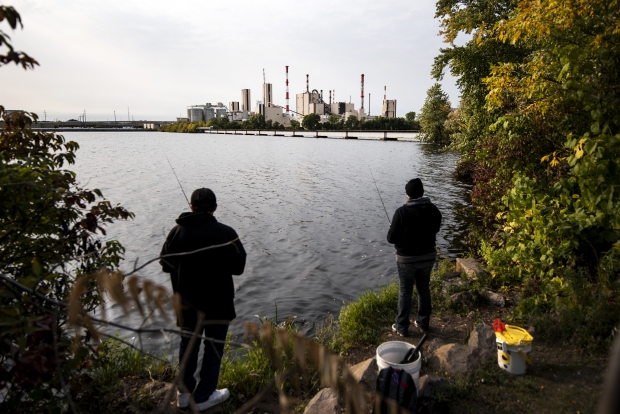 Wisconsin Rapids residents Tanya Plantico, right, and Andy Martinez, left, fish near the Verso paper mill Monday, Sept. 21, 2020. Plantico was surprised when she learned the mill was closing. “It was a huge part of the community,” she said. Photo by Angela Major/WPR.

Advocates of a plan to reopen two closed paper mills say they hope to find a way forward after Gov. Tony Evers vetoed a bill that would have funded $65 million in loans to help a new cooperative purchase the facilities.

The “mill bill” would have authorized the Wisconsin Economic Development Corp. to offer the loans to help a group of timber professionals buy and operate shuttered mills in Wisconsin Rapids and Park Falls. It’s a plan advocates say could allow Wisconsin businesses to retake some control over one of the state’s key industries.

Making those loans possible is a priority shared by Evers, a Democrat, and the Republican authors of the bill. But the funding source for those loans became a partisan showdown, culminating in Evers’ veto on Thursday.

The bill, authored by Republicans and passed with bipartisan support, would have paid for the loans from federal COVID-19 relief funding. Evers had called for funding it with federal incentive money that would come with expanding Medicaid in the state. In his veto statement, Evers repeated concerns that federal guidelines might prohibit that money from going to the mills, creating a risk that Wisconsin would have to return funds to the federal government, and said there are still options to make the loans possible.

“The state is in a strong financial position, sufficient (general purpose revenue) is available, and using state resources would provide greater flexibility on agreement terms and lower risk to the state,” Evers wrote. “There is ample state funding available for this and other priorities.”

Rep. Scott Krug, R-Rome, one of the authors of the bill, said the veto came as a blow.

“There was a bill on the governor’s desk that could get us a long way toward a solution” of getting the Verso mill, which went idle in mid-2020, back up and running, Krug said. “This is a big gut punch.”

Krug said legislators could attempt to override Evers’ veto. The measure passed 63-35 in the Assembly and 20-12 in the Senate, both of which are close to the two-thirds threshold for overriding a veto. But it’s unclear whether there are any legislators open to changing their votes.

If there are other ways of funding the loans available to Evers, Sen. Patrick Testin, R-Stevens Point, said the governor should use them.

“If the governor has the ability to unilaterally solve this problem using existing funds at WEDC or negotiating with the potential stakeholders, then I’m all for it,” Testin said. “I don’t care who gets credit for getting the mills back up and running, but it needs to happen sooner rather than later. Because the longer these mill sit idle, the likelihood that they’ll reopen becomes slimmer and slimmer.”

In a statement on Friday afternoon, Rep. Katrina Shankland, D-Stevens Point, said Republicans should have accepted an amendment to the bill that would have given the state “the legal certainty for the bill to become law.” Shankland voted for the bill despite concerns.

Shankland said there is still time in the current legislative session for lawmakers to work on the issue “and a surplus of state funds to draw from.”

“There’s no reason why we can’t all come together, bearing in mind what we’ve learned from this attempt, and try again,” she said.

In the year since the Verso mill closed, laying off 900 workers in Wisconsin Rapids, local efforts have coalesced around the newly formed Great Lakes Timber Cooperative, an offshoot of the Great Lakes Timber Professionals Association. The group is seeking loans of $50 million toward the purchase of the Verso paper mill in Wisconsin Rapids and another $15 million to help purchase a smaller mill in Park Falls.

The cooperative is not the only party interested in the Verso mill, but advocates say ownership of the mills by the timber cooperative could be transformative. It would restore local ownership to an industry that has been buffeted by global trends.

“Hopefully the dust will settle a little bit,” said Henry Schienebeck, director of the Timber Professionals Association, and then “we’re hoping we get called in to try to help negotiate some kind of a program that will work for everybody.”

One thought on “Evers Vetoes Bill to Help Paper Mills”