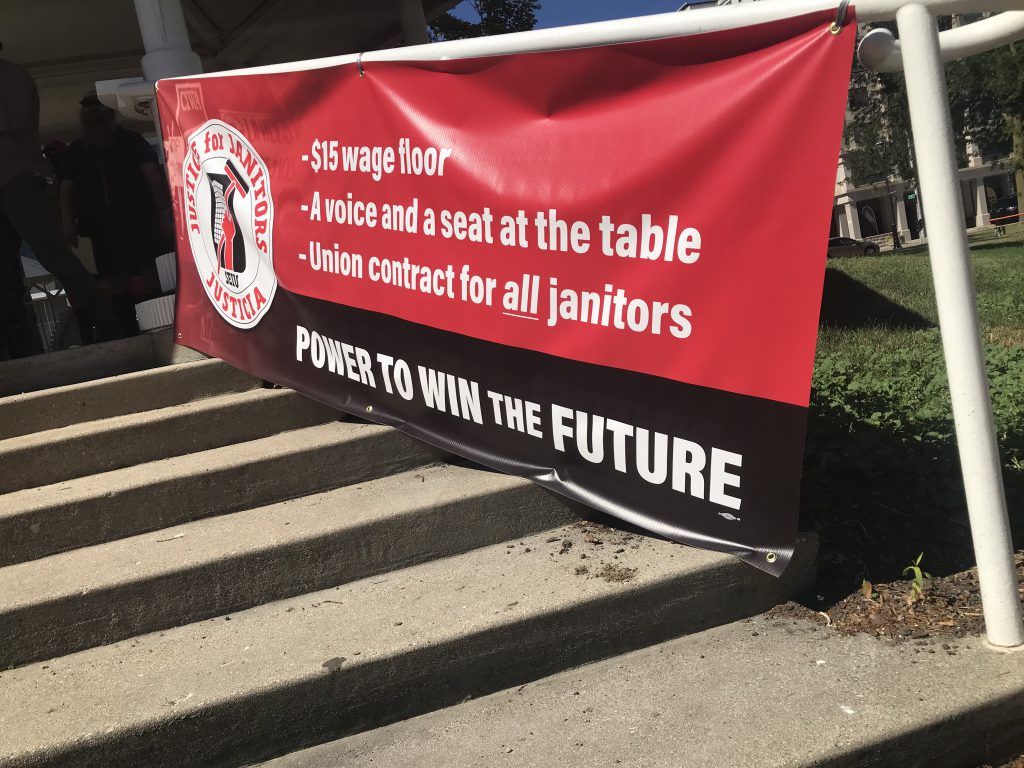 The last time the minimum wage was raised in Wisconsin, “I’ve Got a Feeling” by Black Eyed Peas was the number one song in the country and Windows 7 had just been released.

It is shameful that it has been more than 4,300 days since we have increased our wage floor. During that time, the cost of living and wealth disparities have increased across the country. While the simple fact that no one working 40 hours per week should live in poverty should be reason enough, increasing the minimum wage to $15 per hour would benefit everyone in Wisconsin in various ways.

Increasing wages will help the economy

Increasing the minimum wage to $15 per hour would have tangible, positive effects on our state’s economy. With more money in the pockets of low-wage workers, we would see a boost in economic activity as folks spend their earnings in local communities across Wisconsin.  The Center on Wisconsin Strategy (COWS) also did a study that found raising wages to even $10.10 per hour would result in an increase of 3,800 new jobs.

$7.25 is simply not a living wage and inflation over time has further exacerbated the problem. An increase in wages would help workers catch up with higher prices for everyday goods. It’s a win-win. Workers would be able to provide for their family and businesses would benefit from customers having more spending power. Simply put, our current minimum wage is a relic from another era not reflective of our current economic reality.

It would help our border communities

Both Minnesota and Illinois have a higher minimum wage than Wisconsin. Where do you think hourly workers in Wisconsin’s border communities choose to bring their labor, especially if they are in a low wage job? Of course they work across state lines where they can earn more money for themselves and their family. Our lower wages are hurting these Wisconsin communities in their ability to find good workers during a tight labor market.

Women and communities of color would get a well-deserved raise

With a $15 per hour minimum wage, we would help bring equity to underserved communities. Half of Black workers in Wisconsin would see a raise. Over half of Hispanic workers would benefit. And 37% of women workers in the state would get a pay increase.

These statistics matter because raising the wage will address fundamental injustices in our society – the wage gap that women and communities of color deal with in workplaces every single day. Recent research from Pew shows that in 2020, women earned 84% of what men earned. Likewise, there is a persistent wage gap between white workers and workers of color.

When the CEO of a corporation like McDonald’s is making more in an hour than their median employees make in a year – we have a problem. In addition, wages in the U.S. from 2000 to 2018 were nearly stagnant with the growth in household income slowing to an average annual rate of only 0.3%. Meanwhile, during the pandemic, roughly 650 billionaires in America saw their net worth increase by more than $1 trillion.

Recognizing all work as essential

Too often, low wage workers are made to feel invisible. Janitors, grocery store employees, CNAs, child care workers. These folks do the exhausting, gritty work needed to keep our community functioning during a global pandemic. We cheer for them. We thank them for the job they do. But thankful gestures don’t pay the bills. If we truly want to honor their labor, we must recognize that an honest day’s work deserves an honest wage.

My dad always used to tell me as a kid to not complain about a problem without a solution – and creating a $15 per hour wage floor will provide solutions for many issues our state and country are facing. While there is more work to do to address income inequality, recognize essential work, and make our economy work for everyone – the absolute least we can do is to ensure those who work hard are not earning poverty wages.

Folks, it’s time to raise the wage. In the richest country on the planet, no one should work full time and live in poverty. But that is happening every single day. Right here in our state. Let’s begin the process of making this a state of opportunity again, one where our children can dare to dream.

Sen. Melissa Agard, D-Madison, is a member of the Wisconsin State Senate.