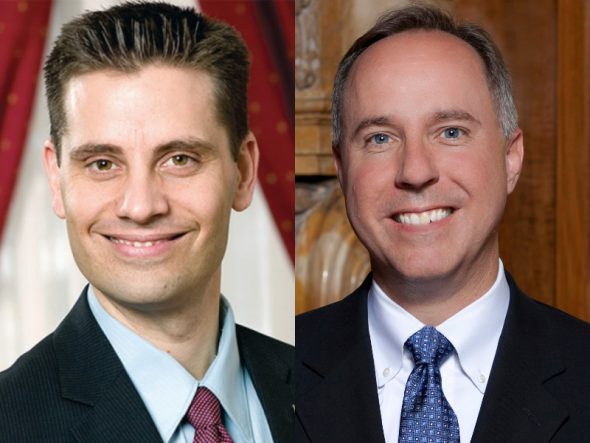 Chris Kapenga and Robin Vos. Photos from the Sate of Wisconsin.

“Some of his more slavishly devoted toadies in Wisconsin have been taking steps to challenge the election,” Hayes noted, but it hasn’t even been enough to please Trump, who blasted the state’s Republicans for not doing enough in the futile effort to overturn the 2020 election. Enter Kapenga, the Delafield-based state senator, who is “an incredible example” of his party’s decline and “absurd humility” to Trump, Hayes noted, and then read from the Republican’s letter.

“This is the level of Stalinist groveling that is required in the Republican Party right now,” said Hayes.

“Sad and pathetic,” Hayes tweeted, and got this response from one of his followers: “Stockholm Syndrome could be renamed for a town in Wisconsin’s 33rd district.” Which means it would be called the Delafield Syndrome? Really not as catchy.

Washington Post reporter Aaron Blake declared that Kapenga had made history — of a kind. “If the Trump era were to one day be memorialized in a museum of some sort, a letter written this weekend by a top Wisconsin Republican should be blown up and put in an extremely large, gilded frame.” He then goes on to offer an annotated version of the letter, with wry slapdowns of Kapenga.

Fun stuff, but no match for the column by Michelle Cottle, a member of the New York Times editorial board, who called Kapenga’s letter “a valuable master class in the art of Trump sycophancy” that “approaches North Korean-style levels of Dear Leader obsequiousness.” She too, offered an annotated version of Kapenga’s letter, which drips with irony.

She jumped on this low point in groveling: “the power of your pen to mine,” Kapenga wrote, “is like Thor’s hammer to a Bobby pin.”

“Bonus points for going with a deity from Norse mythology,” Cottle wrote. “Mr. Trump clearly has a soft spot for the region, to the point that he expressed a desire for more Norwegian immigrants and even eyed buying Greenland from Denmark.”

Kapenga’s note that he was writing his letter as he boards a plane and “In addition to my Trump socks, I will pull up my Trump/Pence mask when I board the plane, as required by federal law,” was just the right touch, Cottle suggested:

“This bit of toadyism may feel like it’s going too far, but, with Mr. Trump, too far is never enough. And it never hurts to take a shot at the feds.”

[inarticlead ad=”UM-In-Article-2″The Times also did a news story on the bowing down by Badger Republicans, entitled “Wisconsin G.O.P. Wrestles With Just How Much to Indulge Trump.”

“Mr. Trump’s demands to the state party to do more to indulge his election falsehoods have frustrated leading Republicans while exposing the Devil’s bargain that many G.O.P. lawmakers have made with him: Acceding to his ultimatums is never sufficient,” the story reported.

Assembly Speaker Robin Vos told the newspaper that “I supported 95 percent of what Donald Trump did as president, right, which is as high as anybody could ever ask for because nobody’s perfect… I’m not going to say the conservative movement lives or dies on whether or not Donald Trump is in the White House.”

That will likely lead to more calls from the state’s most fervent Trumpsters to remove Vos from the speaker position.

I should note that the first commentator to offer an annotated version of Kapenga’s letter (though in a briefer format) was Right Wisconsin editor and Trump critic James Wigderson, who wrote a column on Sunday called “Sunday Funnies: Kapenga Defines Obsequious.”

As he helpfully noted to readers, the Kapenga letter “is not satire.”

At least not intentionally.

6 thoughts on “Back in the News: Kapenga Letter “Sad and Pathetic”?”