More than 20% of households lack internet access in 8 counties, 20% lack computers in some counties. 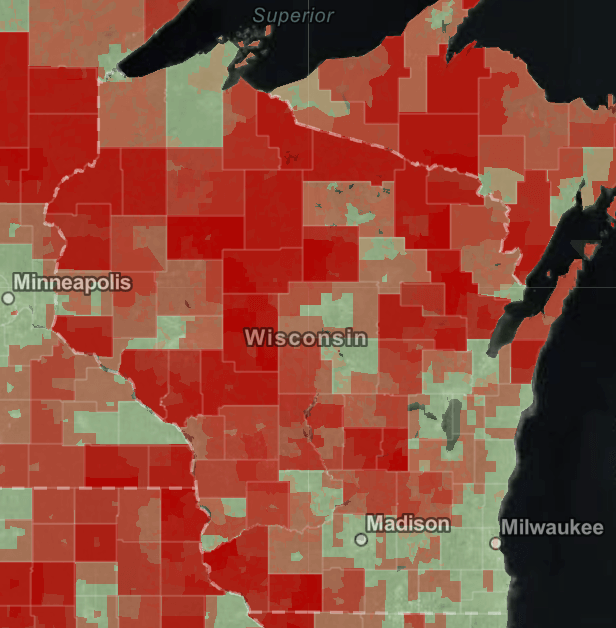 This data from a newly public map created by the U.S. Department of Commerce shows just how far behind Wisconsin’s rural and impoverished areas are in supplying adequate internet access to residents.

In many of these areas, even if the internet is available, it’s too slow to be meaningful, the data shows. Burnett, Price, Waushara and Washburn counties all have median download speeds of less than 13 megabits per second (mbps). The Federal Communications Commission (FCC) benchmark for adequate internet service is 25 mbps.

The problem isn’t just in rural areas, however. In Milwaukee County, if someone has internet service, it’s fast — the median download speed in the state’s largest county is more than 84 mbps. But more than 18% of residents don’t have internet, the data shows.

Within the data, and its accompanying interactive map, the stark disparities in internet access are clear.

Dane County — with its government offices, research university and tech jobs — has the fastest internet in the state with download speeds greater than 85 mbps. Only 5.1% of Dane County residents don’t have an internet capable device and 7.4% of households don’t have service.

This is similar to the suburbs surrounding Milwaukee. Waukesha, Ozaukee and Washington counties have the second through fourth highest rates of internet access.

Over the past year, hundreds of millions of dollars have been earmarked to narrow this gap. Gov. Tony Evers has dedicated part of the money Wisconsin received through the American Rescue Plan to boost broadband internet access and requested much more in his proposed 2021-23 budget. Republican legislators denied Evers’ proposal but still appropriated millions in grants to improve service.

The state government for years has had a program that provides grants to local governments that fund broadband expansion projects, which is set to be beefed up in the next budget. Evers’ administration has also been getting creative in how it provides access. A recently announced pilot program will use a subsidiary of SpaceX to help some residents of Eau Claire County get better internet. A northern Wisconsin school district is using tethered drones to bring service.

Infrastructure packages currently being debated by Congress also include funds to expand broadband.

“The FCC target for these is 25mpbs, which is sufficient for most applications. However, we are far from that in most places,” UW-Madison computer science professor Paul Barford says. “And, it’s not just about up/down speeds, it’s also about where there is still zero connectivity and about the reliability of connectivity in deployed areas. Many things must be considered.”

But as internet access has become a necessity, reaching the areas still lagging behind has become more expensive. The costs of installing broadband infrastructure are much higher in remote Price County than the more populated areas of southern Wisconsin.

“What we’re starting to see right now is when you’re looking to build infrastructure in the hardest to reach places, the capital costs increase,” Public Service Commission (PSC) Chair Rebecca Valcq told the Legislature’s powerful budget committee in April. “It’s getting harder and harder to reach the people who need it the most.”

Testifying to the committee about the internet needs of the state, Valcq said one of the biggest challenges now is a lack of precise data showing where internet service is needed. Where is there internet service down a main road but not a side street — the so-called last mile? Where are service speeds advertised as reaching that 25 mbps threshold but in reality are much slower?

The newly released federal data doesn’t fill that gap, according to PSC spokesperson Jerel Ballard. The state government has already been using this data, but it does provide a more meaningful view of the problem to communities trying to grapple with the issue.

“In general, this map shows that more granular data is still needed to identify with more precision areas of highest need and opportunity,” Ballard says. “The State needs to have accurate information about actual speeds to individual locations.”

And even if the infrastructure is there, the question of getting devices into homes is another hill to climb.

“The PSC understands that infrastructure is only part of the solution to ensuring that all Wisconsinites have access to adequate broadband internet,” Ballard says. “In general, access to devices, affordable service packages, internet access to low-income households, and digital literacy all play a big role in reaching our connectivity goals.”