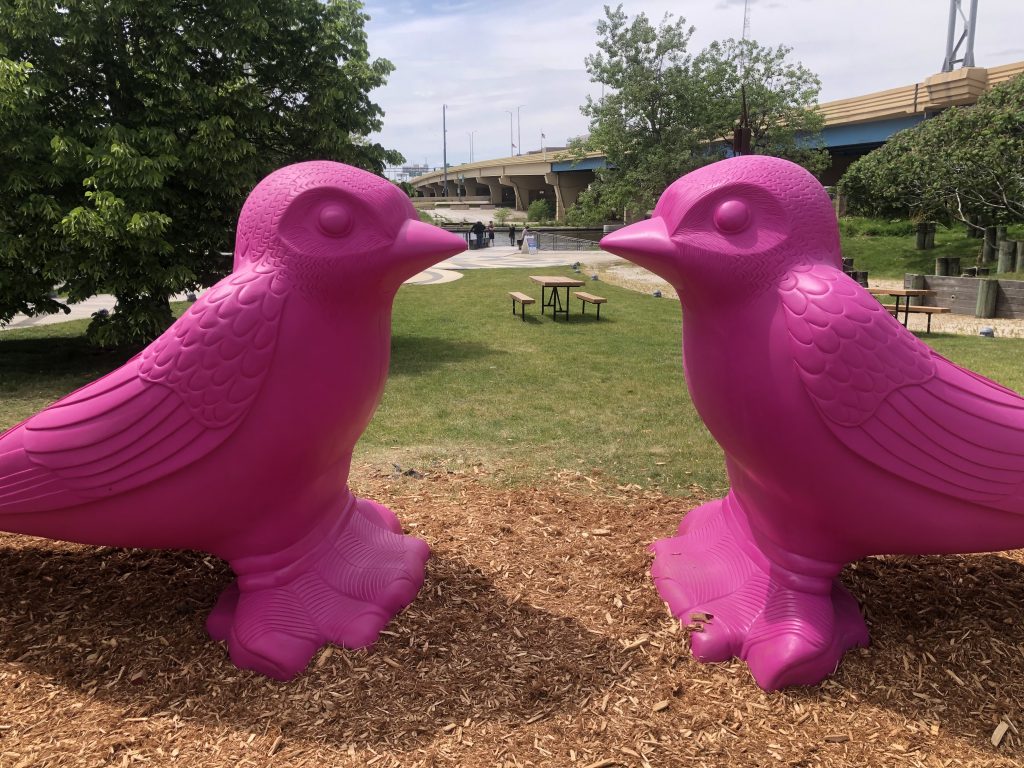 The nonprofit commissioned Cracking Art to deploy a flock of 22 five-foot-tall birds in Lakeshore State Park.

The birds, patterned after swallows and made out of recycled plastic, will anchor a programming series, known as Out of the Box, that will run from June 20th to August 1st. The sculpture installation is known as REbirth and is a traveling exhibit.

“REbirth feels particularly meaningful to us in 2021. With global social, economic and climate upheaval, the idea of rebirth—or rethinking, recalibrating, redirecting—our relationship to one another and to nature have not been this urgent since the 1970s,” says the Milwaukee-based nonprofit’s website.

A variety of events are planned throughout the summer with live music and entertainment. Planned days include World Music Day (June 21st) and Social Media Day (June 29th). A full schedule is available on the Black Box Fund website.

Cracking Art bills itself as a “movement” that advances urban installations of large-scale animal sculptures made from recyclable plastic. Based in Italy, the group consists of artists Renzo Nucara, Marco Veronese, Alex Angi, Kicco and William Sweetlove. It is focused on advancing an understanding of natural and artificial reality.

“We primarily choose urban spaces rather than those dedicated specifically to art in order to trigger unexpected emotions, expel routine from everyday places, and allow for the reflection of a space with new eyes. Our hope is that this relationship can inspire creativity and a different point of view for observing the surrounding reality,” said Cracking Box in a 2018 interview.

Get a daily rundown of the top stories on Urban Milwaukee
“We look at this as moving out of a mental box, not just a physical one, and expanding our connection with the creative community and with the community at large,” said Black Box board president Doug McDonald in a statement. “Our mission is to create welcoming, family-friendly, open gatherings that really draw people from all aspects of the community.”

You can get a preview of what the birds will look at the northwest corner of the intersection of N. Water St. and E. St. Paul Ave. Two birds were installed in the pocket park along the Milwaukee River.

Black Box Fund, created by Deborah Kern and led by executive director Marilu Knode, hosted the Under One Moon festival in 2019 that brought a hanging, 23-feet-in-diameter moon replica to Catalano Square in the Historic Third Ward. It also sponsored Sculpture Milwaukee’s extension into the Third Ward, the painting of Shepard Fairey‘s “Voting Rights are Human Rights” mural on the Colby Abbot Building and a series of other events.

Correction: An earlier version of this article said Cracking Art was based in Spain. The group is based out of Italy.