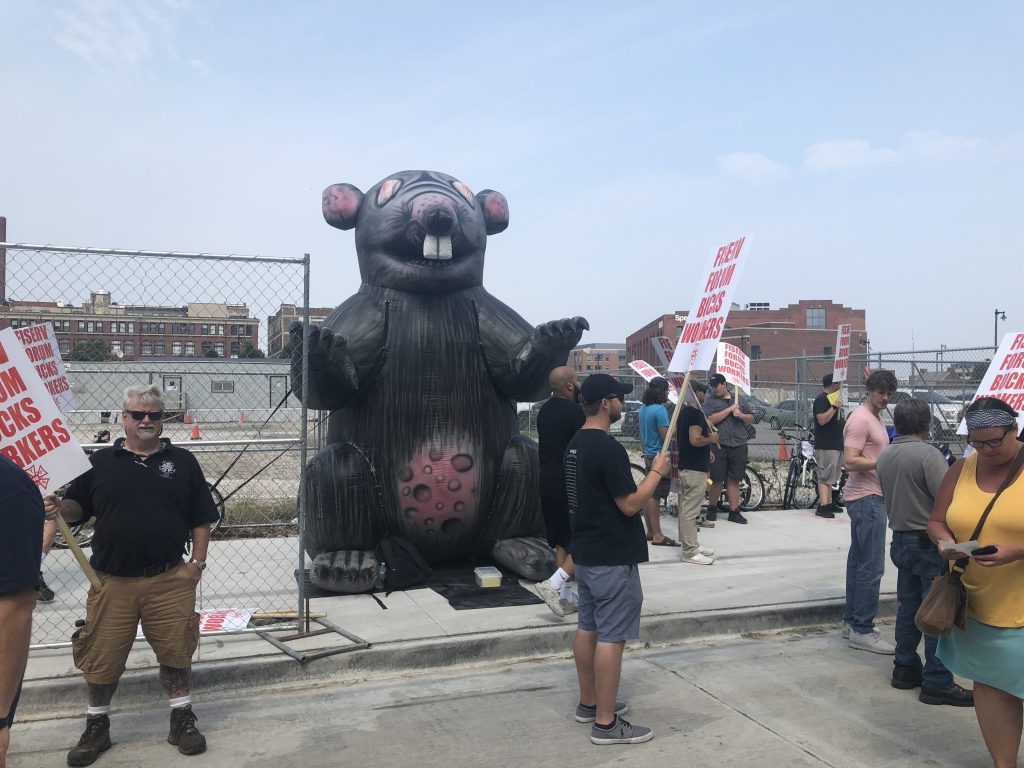 Democratic candidate for U.S. Senate Alex Lasry had a couple problems to overcome in announcing his candidacy. First, his thin political resume and second the assumption that his campaign would be bankrolled by his billionaire father Marc Lasry, co-owner of the Milwaukee Bucks, and his business and politician friends.

And so Alex Lasry has touted his work championing union jobs and a $15 minimum wage, putting him on the side of working people, not the wealthy.

“While others just talk about raising wages,” his campaign website noted, “Alex turned his words into actions. He led negotiations for a historic project labor agreement that included… a $15 minimum wage for all arena workers once Fiserv was built.”

And on May 19, Lasry tweeted about his work with the Bucks to create union jobs: “Five years ago today, the Bucks announced our commitment… for future jobs in Fiserv Forum and Deer District. We followed through on our word and created good, union jobs in Milwaukee that pay family-sustaining wages.”

In reality the Bucks management had to agree to negotiate with the unions and support the idea of a $15 wage because Democrats insisted it was the only way they would support the huge public subsidy for a new arena. As the Business Journal reported: “The Bucks owners agreed to negotiate in good faith with labor unions and to pay the beyond-minimum wages as part of the effort to win Democratic votes as the state Legislature considered the $250 million arena-funding package.”

Lasry, however, told the publication “the Bucks organization views paying higher wages as positive on its own merits because it will attract a better caliber of employee and improve employee retention.” But if so, not all employees were viewed this way. According to a May 15, 2018 email to a union official written by Craig Carlson, the IATSE official leading negotiations with the Bucks VP of Human Relations Kelly Kauffman, Kauffman said the team planned to operate the entire Fiserv sports and entertainment complex in a “non-union” environment when it came to hiring stagehands. “Kelly also stated that it’s an employee’s choice to join a union and said she heard I threatened to picket their arena and they didn’t like that kind of talk,” Carlson wrote.

Get a daily rundown of the top stories on Urban Milwaukee
Even after the arena was fully constructed and in operation, two years after Lasry claimed he created good union jobs, the Bucks employed non-union stagehands making just $12.50 an hour – which Bucks executives called a “matter of economics,” as the Milwaukee Journal Sentinel reported. Tom Gerferich, business manager for IATSE Local 18 stagehands, said the union had tried and failed to get a meeting with the Bucks, who suggested the union was free to try and organize the team’s current workers.

“Gerferich said the Bucks’ jobs do not offer their workers the prevailing wages for stagehand jobs throughout the area, rates that he said they’ve gotten for their workers at places like Summerfest and Wisconsin State Fair,” as WUWM reported. “He said they’ve heard the arena wages range from $12.50 to $14/hr, depending on experience levels, and the jobs are part-time, with no health benefits.”

But after continued pickets by the union at Fiserv Forum events, which typically displayed a large inflatable rat to symbolize the Bucks, the team relented and cut a deal with the union. This was in June 2019, one year after Carlson was warned not to picket the arena. In an interview today with Urban Milwaukee Carlson saluted the Bucks: “It started out a little bit bumpy,” he says of the negotiations, “but the Bucks really ended up doing the right thing.”

To help win the state legislation subsidizing the arena, the Bucks agreed to negotiate with the Milwaukee Area Service and Hospitality Workers Organization (MASH) and agreed to raise the minimum wage to $15 per hour, but not until 2023. But even as some union organizers were calling for a “Bucks-style,” $15 per hour minimum pay labor agreement, some Deer District workers were only earning $10 an hour as of May 2019, according to a press release by the team.

But the advent of the Democratic National Convention in Milwaukee gave MASH a golden opportunity to pressure and embarrass the Bucks. The union became “increasingly visible,” as Jeramey Jannene reported for Urban Milwaukee. “Representatives stood between shuttle buses for national media members and the arena, handing out flyers advocating for their cause earlier this month during a media walkthrough.”

The Bucks then agreed to a union contract with MASH that moved up the $15 per hour pay to 2020. “The agreement also establishes a grievance procedure for employment disputes and a just-cause provision for discipline and termination. Included in the contract are cost of living adjustments and longevity pay increases,” as Urban Milwaukee reported.

And once again the union made nice with the Bucks after getting a deal. Union leader Peter Rickman told Urban Milwaukee he didn’t think the union’s protests had a “substantial impact” on negotiations.

Precisely how much power Lasry had in the Bucks operation is difficult to say. Now 33, Lasry was just 27 when his father and billionaire Wes Edens bought the Milwaukee Bucks in 2014. Lasry was fresh out of New York University with his master’s in business administration when he was handed a job as the team’s Vice President of Strategy & Operations. Two years later, at age 29, he was elevated to Senior Vice President.

But Lasry and his campaign have portrayed him as a key figure handling negotiations over union jobs and a higher minimum wage. If so, he was involved as the team repeatedly resisted union demands.

But the Bucks’ negotiations with Democrats on the promises to work with unions and pay good wages all happened with team President Peter Feigin, news accounts suggest. Democratic State Sen. Chris Larson says “Alex Lasry was not involved.” (Larson is running against Lasry in the Democratic primary for U.S. Senate.)

As for the Bucks negotiations with the stagehands union, Carlson says Lasry wasn’t at the table. But Carlson says he had private conversations with Lasry that were helpful.

But Gerferich offered a different take, saying that Lasry offered the union a meeting with Feigin and Fiserv Forum general manager Raj Saha, on the condition that the picketing end, as James Nelson reported.

But today, not long after Urban Milwaukee began questioning the union about Lasry’s role, it released an endorsement of Lasry, with Gerferich now remembering the big role played by Lasry: “None of this would have happened without Alex’s leadership,” Gerferich declares in the press release.

And Lasry got endorsements from unions like the Teamsters and the IBEW not long after he announced his campaign, with the Teamsters citing his “long history of supporting organized labor.”

Lasry’s record on this issue is arguably central to his election effort. The first paragraph of his campaign announcement called on the nation “to abandon the stale ideas of the past and usher in a new way of thinking about the American economy — to raise take-home pay for working and middle-class families.”  It comes at a time when Democrats are pushing for a higher minimum wage and stronger protections for unions to reduce the wealth gap between the wealthiest 1% and average Americans.

But one of the key drivers of the wealth gap is public funding of privately owned sports teams, which provide massive taxpayer subsidies of arenas and stadiums, often using regressive sales taxes that fall hardest on the poor, to increase the wealth of millionaire ballplayers and billionaire owners.

In the case of the Milwaukee Bucks, the total subsidy is worth at least $800 million and has helped the value of the franchise rise from $450 million to $1.850 billion, the fourth highest increase of the 30 NBA teams.

One of the biggest beneficiaries is Marc Lasry, whose net worth is estimated at $1.8 billion. He can easily bankroll his son’s senate campaign with just the money gained from taxpayers subsidizing Fiserv Forum.

And yet despite the huge windfall from the taxpayers, the Bucks had to be pressured, repeatedly, to use some of those profits to provide family-supporting jobs. Alex Lasry might be better off with a narrative that says he wasn’t really a key player in these negotiations.