The Milwaukee representative introduced a slate of legislation titled "Enough is Enough."

By Isiah Holmes, Wisconsin Examiner - Jun 4th, 2021 03:24 pm
Get a daily rundown of the top stories on Urban Milwaukee 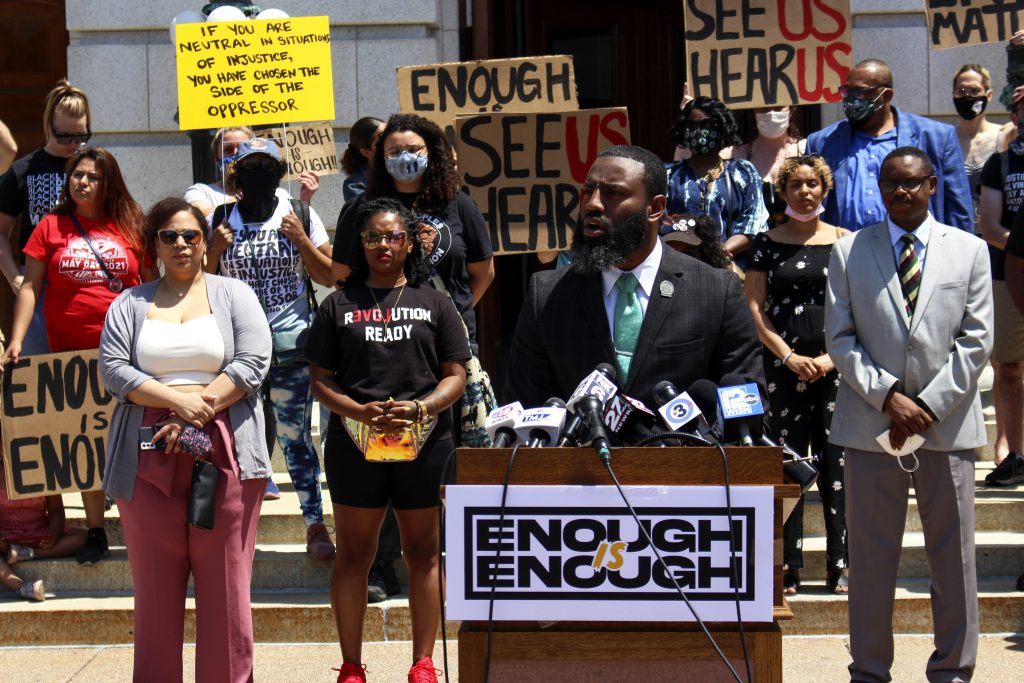 “This is our chance for transformation,” Rep. David Bowen (D-Milwaukee) said during a press conference at the Capitol announcing a new package of police reform bills. Dubbed “Enough Is Enough,” the package contains ambitious proposals that respond to the calls of Wisconsin residents who have marched in the streets over the past year.

Speaking in front of a crowd of about 30 activists, elected officials and community leaders at the State Capitol, Bowen introduced his bills — saying they were building on, not negating, recent proposals that came out of Assembly Speaker Robin Vos’ Task Force on Racial Disparities.

After the task force announced its recommendations, which were the product of deliberation between Republicans, Democrats, law enforcement officials and activists, a large group of advocates denounced them for not going far enough to protect people of color.

“It’s been a while to be able to have an honest conversation in the state Legislature, especially on this issue,” said Bowen. “And let me highlight, for the last year, I have seen citizens of this state step up in ways that we haven’t seen in quite some time to advocate for change when it comes to police overuse of force and abuse of power. The package you see released in front of you is attempting to make a significant shift in the state of Wisconsin.”

“We are here to say enough is enough,” said Rep. Francesca Hong (D-Madison). “It is due time for meaningful criminal justice reform in this state. And I am honored to have been asked to partner with my colleague Rep. David Bowen in releasing a series of bills aimed to really set the floor when it comes to police reform in our state.”

Another bill would prohibit police unions from bargaining for the reversal of a decision by a police chief to fire an officer. Still another would require any vote by a police and fire commission to overrule a disciplinary decision of a police chief to receive a two-thirds supermajority vote, rather than a simple majority. In Milwaukee, conflicts between the Fire and Police Commission and the police department have left the department with temporary, acting chiefs for months.

Other bills touch on scattered issues, from annual use-of-force reporting to be compiled by the Department of Justice to requiring police recertification training to include at least one hour of first aid training, requiring law enforcement to utilize contact cards with information about each officer, and the creation of new grant programs for risk assessment tools and violence prevention.

One of the bills gets to the heart of the militarized culture of police departments. The measure would “prohibit governmental activities related to ‘warrior-style’ training, which is training for law enforcement officers that dehumanizes people or encourages aggressive conduct by the officer, which increases the likelihood of or willingness to use deadly force.” Rhetoric and language encouraging a quasi-military attitude among law enforcement is just one layer of the issue of police militarization. During the 2020 protests of police violence, armored vehicles and militarized tactics, including the use of snatch teams, became commonplace.

Bowen noted that this particular bill is known as “the Philando Castile Act,” referencing a Minnesota man who was killed during a traffic stop by a police officer in 2016. “It is the same training that gets officers in our state, or across our country, to believe that they are always in life or death situations and that their responsibility is not to serve, but to harm individuals in our community,” said Bowen. “And that training is very detrimental to the development and well being of our officers and our community. So banning that type of training in the State of Wisconsin is necessary for us to take a stand and put our flag in the sand of what we believe.”

Bowen acknowledged The People’s Revolution (TPR) protesters, some of whom were in attendance at the press conference — a continuation of more than a year of protests and action meant to spur reforms. Reps. Francesca Hong (D-Madison), Samba Baldeh (D-Madison), Supreme Moore Omokunde (D-Milwaukee) and Sen. Chris Larson (D-Milwaukee) were all in attendance and played a role in drafting the legislation.

“The country has been struggling for over 400 years with police brutality and all the injustices that come with it,” said Baldeh, who applauded some of his more experienced colleagues for “standing here with us today as rookies.”

Moore Omokunde, a freshman state representative, is also named as sponsor of some of the Enough Is Enough package. So, too, is Sen. Lena Taylor, who worked separately on a slew of bipartisan policing bills that got mixed reviews in recent weeks. Taylor is on several of the bills, including those focusing on warrior training, collective bargaining—as is Moore Omokunde–and disciplinary procedures. Senators Chris Larson (D-Milwaukee) and Melissa Agard (D-Madison) are also on  the bills.

“We said that we wanted better,” said Angela Lang, executive director of Black Leaders Organizing Communities (BLOC), during the press conference. “Representatives, those that are here today, have heard those calls. They heard the calls from our team, and the teams from all across the state saying we demand more, we demand better, and to do your jobs. ‘Cause sometimes these are hard conversations. But, honestly, we need to make sure that we’re doing everything we can to protect Black and brown communities.”

Lang and BLOC have been critical in recent weeks of policing bills which have been put forward following the year of protest. “This is the alternative,” said Lang. “We didn’t want to just shut down the other bills and recommendations without providing an alternative. Today is the alternative.” Expressing her hopes that more representatives will support the package Lang declared, “there is a choice to be made. People will make a choice, and at least now, people have a choice.”

When the press conference ended, TPR and members of other organizations went inside the Capitol. Vaun Mayes, a leader of TPR, said he was in the Capitol for the first time since 19-year-old Tony Robinson was killed by a Madison police officer in 2015.

Six years after Robinson’s death, TPR protesters were chanting “enough is enough,” as they walked through the halls, making sure lawmakers knew they were there.

“This is what democracy looks like,” one chant leader yelled.

Bold ‘Enough Is Enough’ package of policing bills introduced in Capitol was originally published by the Wisconsin Examiner.