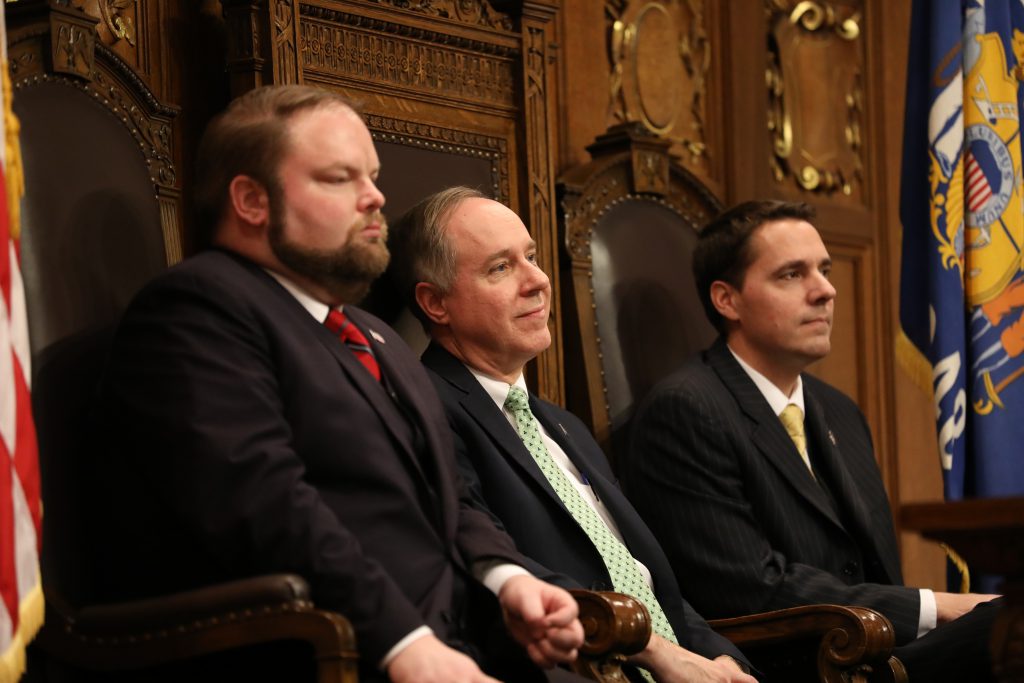 In the first months of 2021, Evers was finally set to gain control of many of Wisconsin’s most powerful boards and commissions as his appointees should now make up a majority on such bodies as the Natural Resources Board (NRB) and the UW System Board of Regents.

Yet, in a mirror of the 2018 lame duck session in which legislative Republicans took power away from the incoming Democratic governor and attorney general, the state’s Republicans are finding ways to thwart the will of Wisconsin voters more than three years after Walker was voted out. (Wisconsin governors serve a four year term.)

“You’ve got what is essentially a coup to maintain the last governor’s control of the board, they’re basically stealing power,” Jeff Mandell, co-founder of progressive legal outfit Law Forward, says. “They’ve found sort of a back door way to perpetuate the legacy, power and policies of Gov. Walker — who the voters chose to get rid of.”

In April, Evers appointed two new members to the NRB — seemingly giving his appointees control of the board that sets policy for the Department of Natural Resources, the state agency that controls controversial issues such as wolf hunting, PFAS regulation and other environmental rules.

Yet when the board met May 26, one of Evers’ appointees was barred from taking her seat because the board’s chair, Fred Prehn, refused to vacate his seat even though his term expired on May 1.

“I will not be sitting on the meeting today but will be listening,” Evers’ appointee, Sandra Naas, said when she was introduced at the beginning of the virtual meeting.

Prehn, a Wausau dentist and cranberry marsh owner, is a regular donor to Republican candidates for office. He was appointed six years ago, assuming the post on May 1 when his predecessor stepped down.

His refusal to vacate the seat is legal, under Wisconsin law, because the state operates differently than the federal government. In the federal system, an appointee by the president does not assume the office until they are confirmed by the Senate.

This setup is open to partisan games — the nomination of Merrick Garland to the U.S. Supreme Court is one example — but Wisconsin’s system is built to head off this problem and allow nominees to assume their posts prior to senate confirmation.

This made sense, Mandell says, when the Legislature met far less frequently. If the Legislature is only in session a few times a year, it doesn’t make sense to grind state government to a halt because of a vacancy. Similarly, if the governor has not yet made a nomination, the previous holder of the seat can stay in the position until there is a nominee.

“Back then the Legislature met very, very rarely,” Mandell says. “The idea is we need to perpetuate the operations of government and the only way to do that is allow people to hold over these positions as we all twiddle our thumbs and wait for the Senate.”

Prehn is making a leap in the legal logic that guides appointments to the state’s boards and commissions, according to Mandell. Instead of staying his seat until there is a new nominee to fill the role, he’s staying in the seat even though there’s a new nominee.

“I think it should offend people’s senses of justice and fair play,” Mandell says. “They’re taking advantage of the idea — if there’s not another nominee you can continue to serve. They’re applying that where there is a nominee ready. It seems to me, this is not a question of partisanship, this a question of basic good governance.”

This quirk in state law, which is allowing Prehn to keep a Walker majority in control of the NRB, has been used in other ways by Republicans in the Legislature during the Evers administration. Because appointees serve in a “de facto” role until they’re confirmed, they can be required to do their job with the threat of a failed confirmation vote hanging over them.

“Republicans are still trying to do everything possible to tie Gov. Evers’ hands into multiple knots,” Matt Rothschild, executive director of the Wisconsin Democracy Campaign, says. “Obviously in the Legislature they’re doing it but they’re going way beyond that on the administrative boards, like the NRB where a Republican appointee, whose term is expired, bizarrely refuses to get off the board and let Evers’ appointee take the seat as is customary.”

“That’s the distressing part … because we allow people to serve in these de facto capacities, the Legislature allows them to serve and has them on tenterhooks? ‘We can fire you tomorrow,’” Mandell says.

On Wednesday, Prehn implied he wouldn’t be giving up his seat any time soon when he talked about attending the next NRB meeting in June. And the NRB is also not the only state board or commission where Republicans hold power to prevent Evers from gaining a majority of his appointees installed.

This year, Evers’ nominees to the UW System Board of Regents gave him control of a board that, under Walker control, has been highly controversial. None of the nominees Evers has made to the board since he was sworn in has been confirmed by the senate. All of them are currently serving as de facto members.

This status as “de facto Regents” could have severe ramifications when the board meets this week for the first time with a potential Evers majority.

This week’s meeting is set to play a huge factor in the future of the UW System as a new board president is elected. The presidential election could be contested between Evers and Walker appointees.

Whoever serves as the next board president will be in charge as the system takes on a second search for a new president of the system.

In the days before this important meeting takes place, however, the Senate Committee on Universities and Technical Colleges could finally call a vote on a few of Evers’ nominees, advance those nominations to the full Senate and vote them down, according to the Senate Chief Clerk’s office. If only a few of the nominees are rejected, the Board of Regents could potentially maintain a quorum while preventing Evers from gaining control of the board and the future of the system.

The committee does not have any meetings scheduled, but by failing to hold confirmation votes for Evers’ nominees, the option is available to them.

Nick Fleisher, President of the Wisconsin chapter of American Association of University Professors, says he’d be alarmed — but not surprised — if the Republicans on the committee took advantage of this power.

“On one hand, it wouldn’t surprise me, because they’ve clearly shown a lack of respect for the fact we elected a Democratic governor in this state and they’ve done everything possible to blunt his power,” Fleisher says. “On the other hand, this would be a shocking escalation and a disturbing intrusion of politics into the normal functioning of this board.”

These boards are the most recent examples agencies, boards and commissions that Republicans have rearranged. In 2016, Walker split the Government Accountability Board into the separate ethics and elections commissions.

Since then, the Wisconsin Elections Commission has been at the center of political gridlock as it splits 3-3 along partisan lines on most hot-button issues — one Republican member has even spread conspiracy theories about the 2020 election.

And on the Wisconsin Ethics Commission, Republicans recently considered former Supreme Court Justice Michael Gableman as a member. Gableman was frequently accused of ethics violations during his term when he failed to recuse himself from cases involving his political donors. This is a trend other current members of the Supreme Court have continued.

A spokesperson for Evers did not respond to a request for comment on Republican efforts to prevent him from seating appointees who reflect his priorities, but Rothschild says it all makes the state look bad.

“The partisanship is running rampant right now and it’s destroying what’s left of the image of Wisconsin,” he says.