Upper deck of pavilion being repaired after engineers report warned of safety concerns. 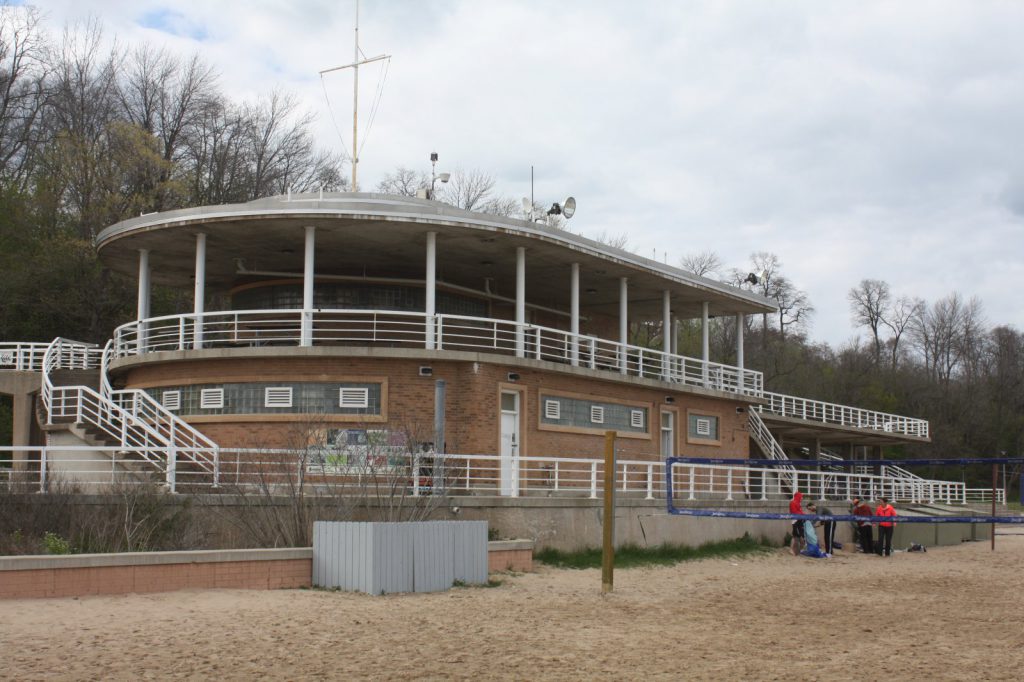 Milwaukee County Parks is making some last-minute repairs to the historic Bradford Beach Bath House, also called the Bradford Beach Pavilion, before the summer and thousands of beachgoers arrive.

Specifically, repairs are being made to the second-floor deck of the pavilion that became a center of controversy after the announcement of a second floor bar and restaurant prompted concern about public access.

The beach house is a historically designated Art Deco structure built in 1949. It’s part of the North Point Historic District. And like much of the infrastructure in the parks system, it needs more repairs than the county can conceivably afford to make.

In April of this year, Pierce Engineers produced a report for the department outlining a number of repairs that need to be made to the concrete slab that makes up the second-floor, open-air deck on the north end of the beach house.

Among the recommended repairs in the report was the removal of some hanging concrete from the underside of the deck that posed a “life-safety concern of concrete falling on patrons gathering underneath the slab.”

This repair, the engineers said, should be addressed immediately. Ian Everett, parks communication manager, said the department is working with a contractor to do some “initial immediate repairs”, and that the contractor is currently assessing the work needed at the site.

Much of the damage to the concrete slab is occurring because of water infiltration. It’s causing corrosion of reinforcement bars and cracking as it freezes and thaws with the seasons. Adding to the problem is a sealant applied to the concrete in early 2020, which is “doing more harm than good,” according to the report. 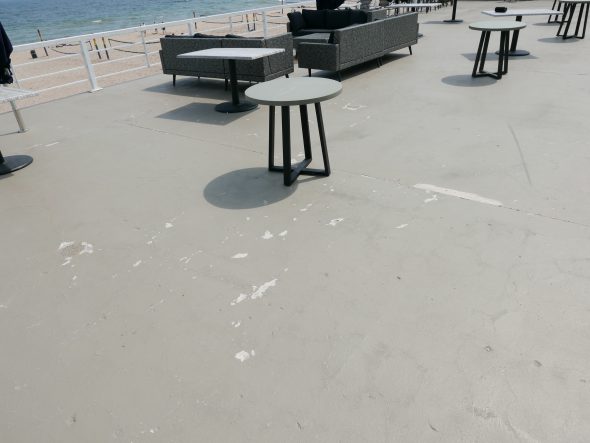 The sealant can be seen here on the concrete floor of the second level of the Bradford Beach Bath House. Photo taken May 20th, 2021 by Graham Kilmer.

The sealant was applied by The Dock Bradford, the concessionaire at the beach, and was not cleared with the parks department, Everett said. “We’re currently reviewing what will need to be done to remedy it.” It’s not the correct sealant for Wisconsin’s weather and is trapping moisture, causing further degradation.

The second-floor deck is the site of a planned shipping container bar and restaurant by The Dock. A modular bar and tables, seating and lounge areas will be added, all of which will be available for use by the public.

Despite the recommended repairs, the engineering firm stated the deck can still support the container bar. “The structure, in its current state and condition does not exhibit any conditions that would change the recommendation that the current structure is capable of supporting these loads.”

The proposed bar was a source of controversy, as many county residents voiced opposition, fearing it would limit public access to the second floor of the beach house. But the lease between The Dock and the county requires public access to the second floor deck be maintained at all times. The restaurant will serve walk ups and the seating will be available to everyone regardless of whether they are ordering food or drinks.

The five-year lease requires the concessionaire to pay the county $20,000 annually, plus a 5% commission on all sales above $400,000 for the year. It also required The Dock to establish a maintenance fund for the property with $70,000 between 2019 and 2020 to invest in the pavilion, the beach and the parking lot. Everett said the maintenance fund is a strategy the department pursues in a number of its leases.

The pavilion on Bradford Beach is just one of hundreds of buildings in the parks system that are functioning despite significant maintenance needs.

A report by the Wisconsin Policy Forum in 2019 estimated the capital project backlog in the parks system would be near half a billion dollars in the next two years. Parks has a limited annual capital budget that doesn’t allow them to address the massive backlog of projects.

Get a daily rundown of the top stories on Urban Milwaukee
“This is a parks system where we don’t get to build anything new; we spend all our money fixing,” Everett said.

Parks also has major multi-million dollar projects on its plate, like the Mitchell Park Domes, parkways that can cost as much as $1 million a mile to resurface, aging community centers and other projects, less visible to the public, that are otherwise critical infrastructure.