How Republicans Are Misleading Donors

In a perhaps misbegotten effort to keep up with the Donald Trump cult, I recently signed up for conservative political pundit Ben Shapiro’s newsletter. Besides a daily missive from Shapiro, this immediately made me part of the target audience for GOP fund raisers. Here is an email I received a couple of days later: 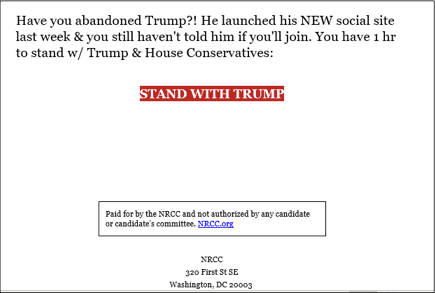 There are several points to note about this communication.

One is that it appears to come from Trump himself—or at least his campaign. It does not. It comes from the National Republican Congressional Committee (NRCC). In fine print, it states that it “is not authorized by any candidate or candidate’s committee.”

Presumably, that includes Trump himself. That raises several questions. Some time ago, Trump sent cease-and-desist orders to several Republican organizations who were using his name to raise money. Have he and NRCC kissed and made up?

Secondly, the email says that reader has “1 hr to stand w/ Trump & House Conservatives.” This implies that the offer to contribute to the NRCC will be withdrawn after one hour.

Shown below is the upper part of the website that appears after hitting the STAND WITH TRUMP button: 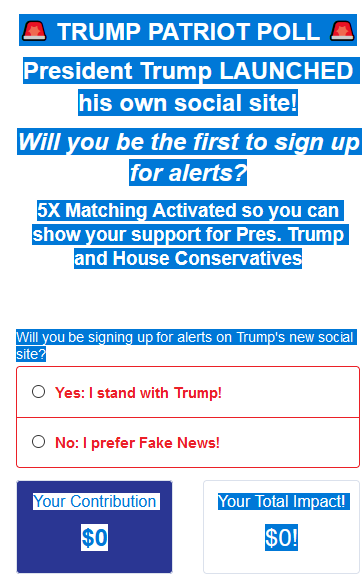 The NRCC is the political arm of Republican House members. Anyone eager to sign up for Trump’s promised social site through this site is likely to be disappointed.

So far as I can tell, clicking on on the “I Prefer Fake News!” option has no consequence. The NRCC is perfectly happy to receive contributions from folks who prefer fake news, as shown below.

Also, running out the clock has no effect. The website is just as happy to take a contribution after an hour as before, as shown below. The countdown timer disappears, only to be replaced by this message: “The timer has expired, but you can still donate below!”

“The timer has expired, but you can still donate below!” 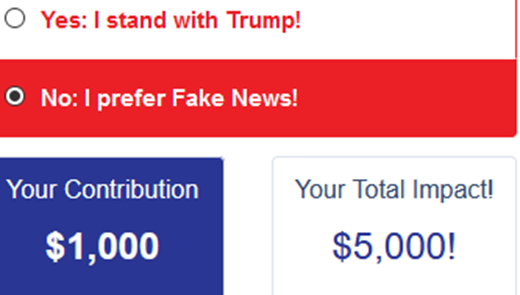 Yes, I stand with Trump!

We see a clock counting down the remaining part of the hour, followed by several suggested contribution levels, and two yellow rectangles, as can be seen below. Each yellow rectangle has two paragraphs of text. The first, in bold and larger type than the second, promises that if Republicans take the House, Trump will run for president. It is the second paragraph, however, that carries consequences for the unwary.

Conveniently, both yellow boxes arrive already checked. If the first check is left alone, a single contribution from you will automatically repeat every month in future. Leaving the second check alone creates a second April contribution, thus doubling April’s contribution. Strikingly, the text creating a future commitment is lighter and smaller than the text preceding it. 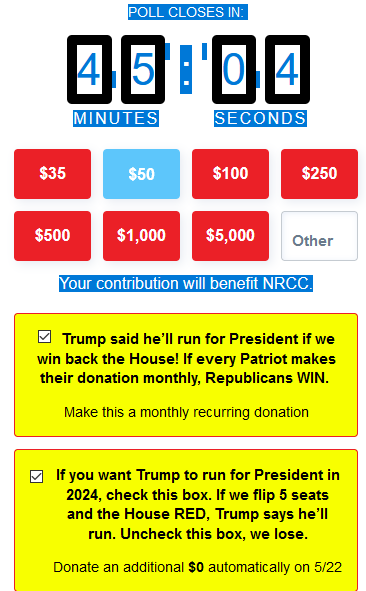 By not unchecking the boxes, a $1,000 contribution will be repeated in June, July, and every future month until cancelled. Also, the $1,000 May contribution has been magically converted to $2,000.

Finally, the website discourages leaving. Trying to switch to another website without changing tabs generates this message. 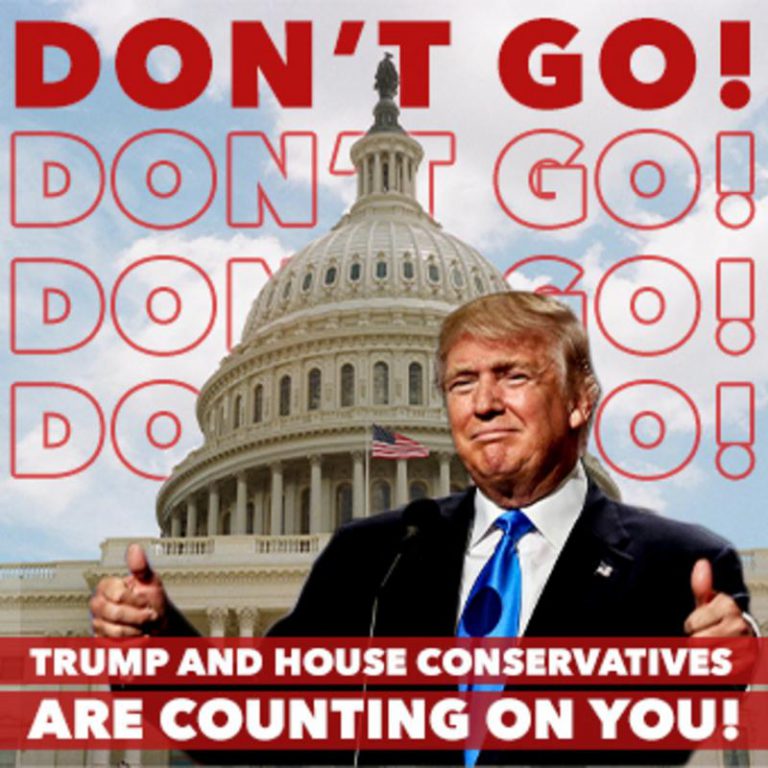 According to a New York Times article, the use of default check boxes was pioneered by the 2020 Trump reelection when it hit a cash shortage and struggled to keep up with Biden fund-raising. This led to considerable unhappiness among Trump supporters who were hit by unexpected withdrawals of thousands of dollars from their bank accounts and credit cards.

From a financial viewpoint this strategy was highly successful, although it resulted in unusually high demands for refunds. Even if the extra contribution was refunded, the effect was an interest-free loan to the Trump campaign, which was repaid through post-election fundraising aimed at reversing the results of the vote.

The Times points out that the practice has spread to other Republican campaigns, not just the RNCC:

One common element between the Trump campaign and the RNCC, as well as the Republican campaigns, is that they use WinRed to manage political contributions. WinRed, a for-profit company, is regarded as the Republicans’ answer to the Democrats’ ActBlue, which, however, is a nonprofit.

Besides the financial blow that the pre-checked donation boxes can create for supporters, these letters can be criticized for their lies. These include the claim a contribution would bring a five-times match, the implication that the decision whether to contribute would be communicated to Trump, and the claim that a response was required in one hour.

The approach taken by the NRCC and the Trump campaign reflects a disdain from the Republican fundraising professionals towards their supporters. Apparently, these professionals have concluded there is no cost to misleading donors and sneaking in very expensive terms.

One thought on “Data Wonk: How Republicans Are Misleading Donors”