Pandemic policies he pushes will cause the most deaths among Republican voters.

Tools for fighting the coronavirus have become surprisingly partisan. First, the issue was whether to wear masks to inhibit the spread of the virus. More recently the issue has centered on whether to be vaccinated against the disease.

A recent Monmouth College poll asked a sample of Americans whether they had received at least one dose of COVID-19 vaccine, planned to get the vaccine as soon as allowed, let others get it first to see how it goes, or would likely never get the vaccine. The pollsters commented that “partisanship remains the main distinguishing factor among those who want to avoid the vaccine altogether …” The graph below shows the response. 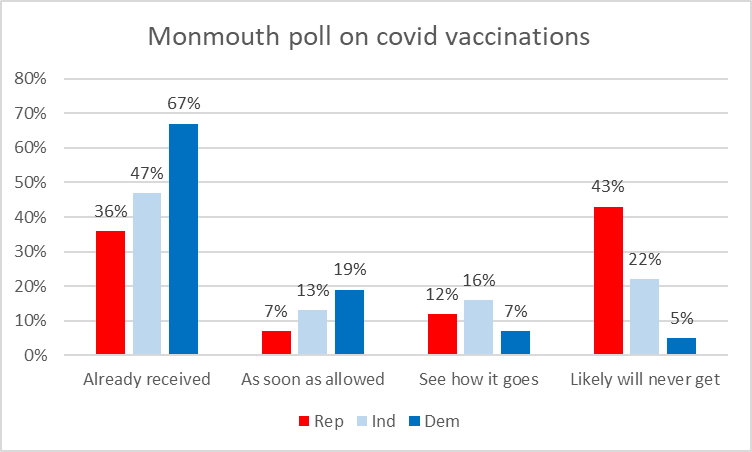 While two thirds of Democrats reported they had already received at least one dose, 43% of Republicans said they intended to never get the shot. The partisan influence is even greater when the two middle categories are combined, as shown below. While 86% of Democrats report that they have either received the vaccine or intend to, 55% of Republicans are vaccine skeptics. 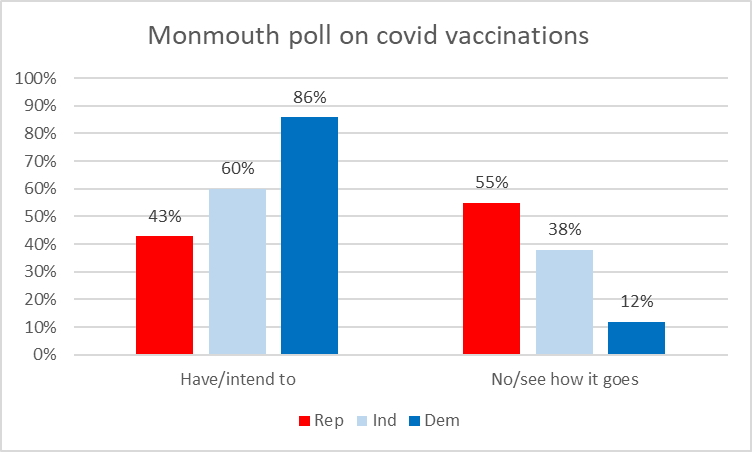 This partisan polarization has been encouraged by a number of Republican politicians and commentators, including Wisconsin’s U.S. Senator Ron Johnson.

Phase 3 of the process of evaluating the proposed vaccines was aimed at measuring their effectiveness. An NIH report describes the trial for the Moderna vaccine. The trial began on July 27, 2020 and enrolled 30,420 volunteers. Half were randomly assigned to receive two doses of the Moderna vaccine and the others receive two shots of saline solution (called the placebo group) also 28 days apart. This is called a double-blind study because neither the volunteer nor the person administering the shot knew which was which.

The science tells us that vaccines are 95% effective, … So, if you have a vaccine, quite honestly, what do you care if your neighbor has one or not. … From my standpoint, because it’s not a fully approved vaccine, I think we probably should have limited the distribution to the vulnerable.

But 5.9% is not zero. While the vaccinated volunteers in the Moderna study had way less COVID-19 infections than those given a placebo, some still were infected. Thus, vaccinated people increase their risk if surrounded by unvaccinated people. The danger is particularly acute if society decides to drop all the rules meant to control the spread of the virus, such as wearing a mask and keeping distancing.

Consider the following thought experiment. Assume that when the virus first hit in early 2020, it was discovered that there was no need to develop new vaccines because existing vaccines were as effective against COVID-19 as those that appeared at the end of 2020 and there was sufficient supply to inoculate everyone. For any individual, the result of taking the vaccine is reduced to 5.9% compared to an unvaccinated person, assuming that there is no change in the incidence.

However, this experiment assumes that everyone is vaccinated, so that the number of people carrying the infection and liable to spread it is 5.9% of the number that existed in the actual 2020. Thus, a rough estimate of the effect of universal vaccination would be that the number would go down because of both ends of the transaction: the potential receiver of the virus would be less likely to get the infection and the potential source less likely to carry it.

Applied to both ends of the infection transaction, 5.9% becomes 0.35%. In 2020, Wisconsin reported 520,438 cases of COVID-19, leading to 5,245 deaths. This calculation implies that with universal inoculations, there would have been only 1,840 cases and 19 deaths. More likely, the disease might have simply disappeared.

To the right of the second red line the curve shows exponential decline. In this case ten infected people pass their infection to nine others.

The peak, between the red lines, shows a transition between growth and decline, in which the growth rate decreased by 2% every period until it became -10%. 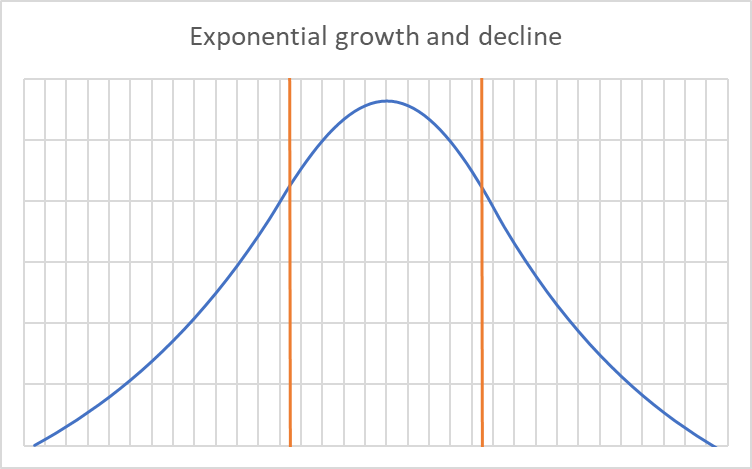 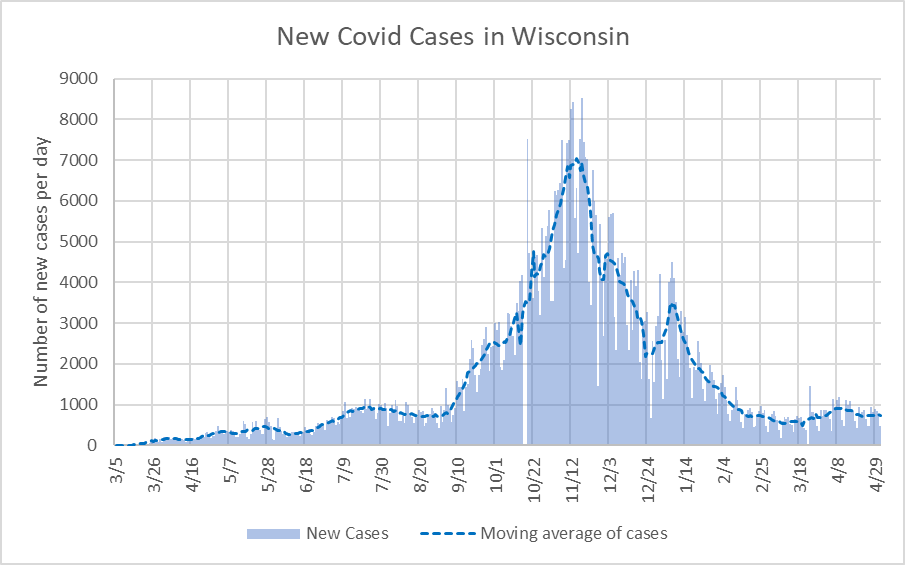 The trick to turning exponential growth into exponential decline is to get the growth factor to something less than one, in which each generation of virus is less than its predecessor. In other words, to reduce transmission between people. Tools to do this include wearing masks, avoiding crowds, and vaccines. Of these, vaccines are the most effective and least disruptive.

However, vaccines are not perfect. As the Moderna and other studies show, inoculated people can still catch the virus. Thus, having a reservoir of unvaccinated people among whom the virus can spread and perhaps evolve into a variant that can resist the vaccine is bad for everyone.

However, the people most likely to act on Johnson’s dismissal of vaccines are Republicans, as shown by the Monmouth and other polls, who probably voted for him. To reward their support by pushing a policy that will increase their risk of sickness and deaths is truly a tragedy.