By Isiah Holmes, Wisconsin Examiner - Apr 22nd, 2021 02:46 pm
Get a daily rundown of the top stories on Urban Milwaukee 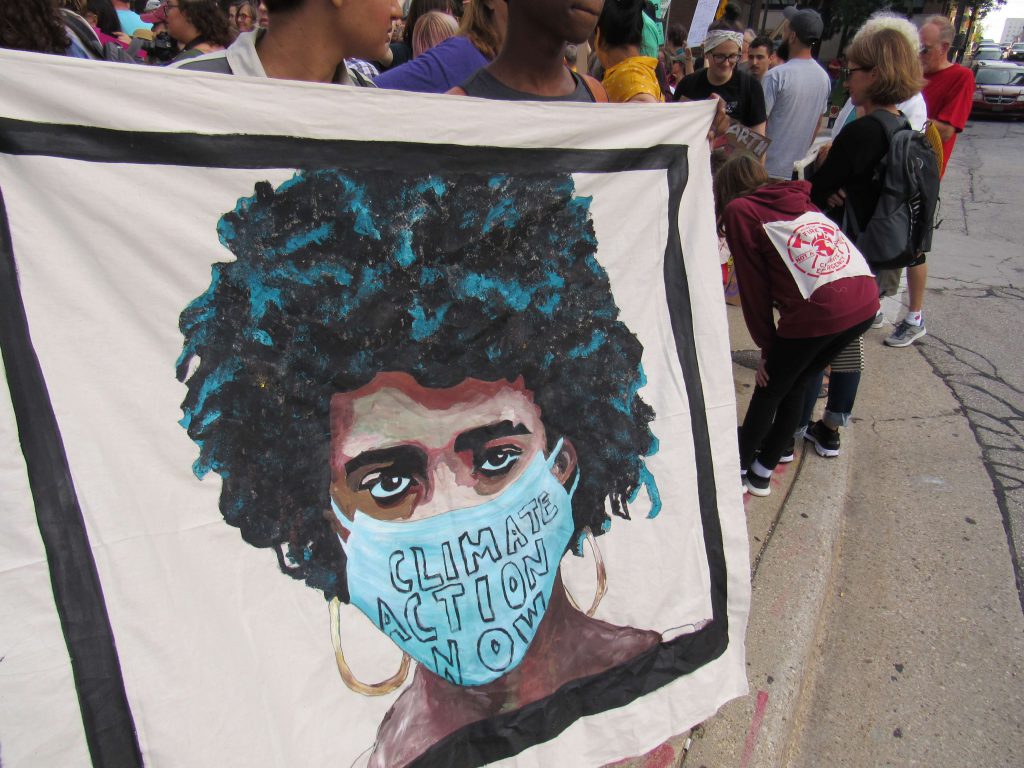 Earth Day serves as a reminder of our collective responsibility to care for the environment. And this year, policies that address climate change continue to be among the most pressing priorities for Gov. Tony Evers and Lt. Gov. Mandela Barnes.

The effects of climate change in Wisconsin vary depending on the season. Currently, Wisconsin remains at a high risk of wildfires due to a combination of unseasonably warm weather, dry vegetation, and low humidity.

On April 5, Evers declared a state of emergency due to the wildfire risk. The National Guard was mobilized to assist with aerial fire suppression using its Black Hawk helicopters. By the beginning of April there had been over 320 reported wildfires this year, resulting in over 1,400 acres which have been burned. That’s already nearing the 1,600 acres which were burned by wildfires during 2020.

According to a WMTV report, more than 90% of Wisconsin is abnormally dry, which can indicate a coming drought. Wisconsin also faces erosion of shores along the Great Lakes, severe winter weather, warming of Lake Michigan, and other environmental issues which are worsened by changing climate patterns. On March 25, Gov. Evers posted a Twitter video that touched on the place infrastructure investments have in the state’s overall climate vision.

“President Biden and Congress made a crucial first step,” said Evers. “The American Rescue Plan is a relief that puts Wisconsin a step closer to the goalpost we set for achieving prosperity in the coming months. Now, we have to take the next step: Bold investments in infrastructure and jobs, especially clean energy jobs. We can make real progress in building infrastructure for our future, while creating millions of clean energy jobs to get people back to work. And as we build that clean energy economy, we’ll be preparing states like ours to tackle climate change head on.”

Evers encouraged federal policy makers to, “follow our lead and make bigger investments and bolder commitments to the clean energy economy. This is our moment to bounce back and build better, together. And it’s our best shot at creating a cleaner, more prosperous state.”

During a live session on climate and environmental policy proposals in his Badger Bounceback budget plan on Wednesday night, Evers again stressed the gravity of the situation. “We have to acknowledge our challenges if we’re going to have a chance at fixing them,” said Evers. “And in order for our state and our economy to bounce back, it’s time for us to embrace a future where we don’t have to choose between protecting our environment, good paying jobs and a strong economy. We can do all of those things.”

Some $40 million in Evers’ budget plan is allocated to address water contamination issues, from lead service lines to PFAS contamination. “We’re also investing in farmer-led innovations so that they can lead the way in addressing water issues in their communities and transition to more sustainable farming practices,” Evers said.

Among other priorities, the budget addresses the protection of critical habitats, infrastructure to prevent flooding, “clean energy workforce development” and programs for Wisconsinites to make their homes, schools and businesses more energy efficient. It also makes investments in job training for sustainable, renewable technology jobs.

Evers is proposing creating an Office for Environmental Justice. He said such an office would allow state agencies to work with low income and tribal communities, as well as environmental justice advocates to design policies tailored to those communities. Provisions in the budget also pave a path for a “first of its kind” flood insurance program, as well $5 million for a loan program to help homes threatened by Great Lake shoreline erosion. “Much of this budget builds on the work of the task force on climate change, led by our Lt. Gov. Barnes,” said Evers.

Barnes hopes that Wisconsin’s economy post-pandemic will lead to a more equitable state. “Especially here in Wisconsin we know that confronting this climate crisis and creating green jobs and economic opportunity for all of us has been something that has been top of mind, for me personally as lieutenant governor,” Barnes said during a climate talk on April 2.

“Personally, as the chair of the governor’s task force on climate change, I’ve had a chance to see how the climate crisis impacts every community across the state,” Barnes said during the April 2 session. “This could be whether it’s illness caused by lead poisoning, loss of life and livelihood due to extreme weather events, or even the economic toll on our economy and our farming communities. And we know that lower income communities, marginalized communities, communities of color, rural communities, face even harsher impacts here in Wisconsin.”

Barnes declared that the proposed 2021-23 budget contains “the most ambitious climate agenda this state has ever seen.” Sen. Chris Larson (D-Milwaukee), who joined Barnes for the session, echoed the call for swift and bold shifts in climate policy.

“The climate crisis is already affecting Wisconsin,” said Larson, “We can’t wait any longer to take bold climate action. Climate change threatens to destabilize several aspects of our lives here in Wisconsin. Our farmers are facing colossal challenges to their crops with droughts and flooding conditions. … Dairy farms, which account for roughly half of Wisconsin farm revenue, are at risk by extreme heat exacerbated by the climate crisis.”

Larson added, “We’re overdue to making investments in our infrastructure for our kids’ future.” He also noted that three significant flooding events in Wisconsin over the last decade have resulted in “at least $12 billion in damage, and three deaths.” He stressed that, “if we don’t act now, 200,000 people will be impacted if there is inland flooding in Wisconsin. We cannot stress enough how urgent the need is to act boldly to tackle this crisis; this is affecting all of us. We owe it to ourselves, our neighbors, our kids and the next generation, and of course the most vulnerable communities, to build back better our country. We can create a more equitable future for all, starting today.”