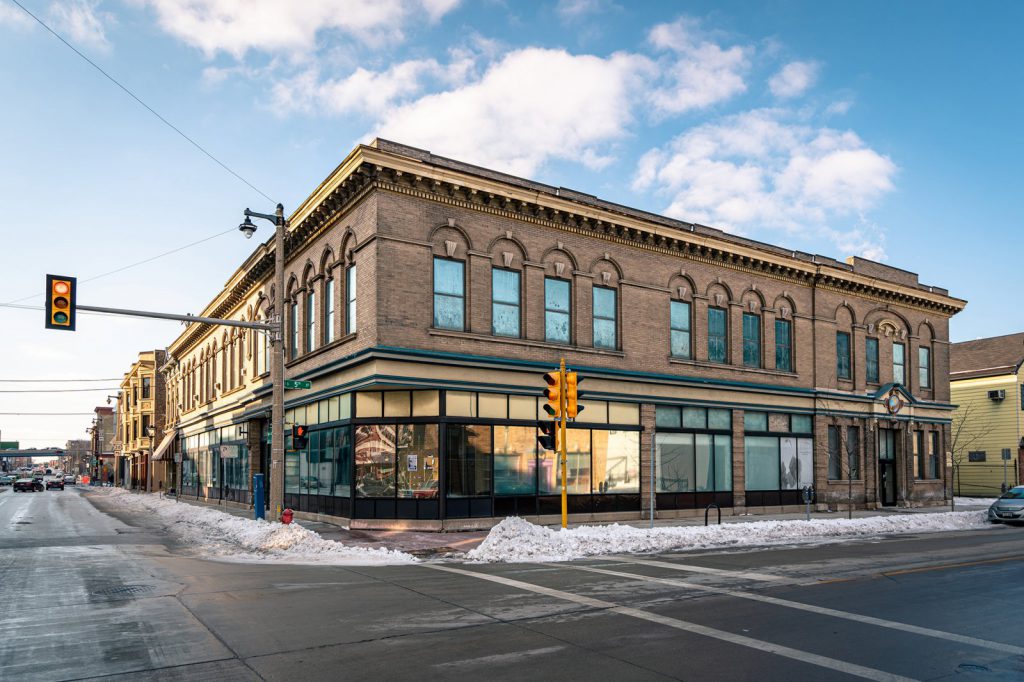 The new owners of the former Schlitz Tivoli Palm Garden in Walker’s Point will maintain it as a home for dance, albeit an entirely different kind than it has been for the past four decades.

Built in 1901 by the Joseph Schlitz Brewing Co., the two-story building was home to a variety of tenants after the original beer garden shuttered.

A fire effectively gutted the interior in 1979, with the Milwaukee Ballet using the rebuilt structure as its home from 1981 through 2019. But the Ballet relocated in September 2019 to a new, purpose-built facility in the Historic Third Ward.

Social architecture firm NEWaukee planned to buy the building, 504 W. National Ave., and turn it into a mixed-use facility with offices, an event space and cafe, but financing for that plan fell apart amidst the pandemic. The Ballet then listed the property for sale through Sandy Golden and Bill Bonifas at CBRE.

In February, Dan Herlache and Jordan Dimmer‘s H&D Investments, acquired the property for $740,000.

At the same time, Latin and hip-hop-focused Daync Studio lost its lease for a space at 910 E. Hamilton St. on the Lower East Side.

Owners Amber Rivard and Joshua Burgos were connected with H&D and will make its renovation work much easier: H&D will be able to keep the building’s existing double-height (28 foot tall) dance studio in place and the specialized floor bracing. The studio is leasing a portion of the 14,614-square-foot building.

Get a daily rundown of the top stories on Urban Milwaukee
It will be a big upgrade for the couple, who started the studio in 2016. A profile by Talis Shelbourne details how they’ve poured their life into the business, including literally living out of the studio for a period of time.

The new dance floor is three times bigger than their prior home, which will make it easier to maintain the social distancing necessary to safely operate during the COVID-19 pandemic. It will also provide room for growth when the pandemic subsides.

A GoFundMe campaign seeking to raise $30,000 to support the move is still open. At the time of publication 285 donors have contributed a total of $22,334.

The organization offers classes for teens and adults of all skills levels in salsa, bachata and hip hop & heels dancing. 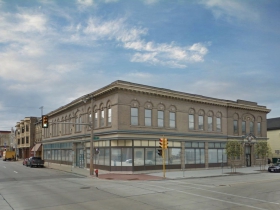 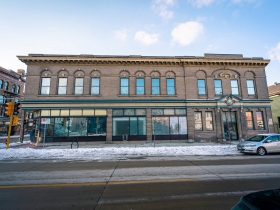 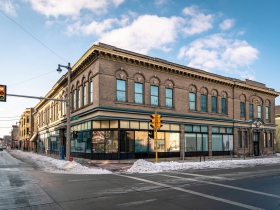 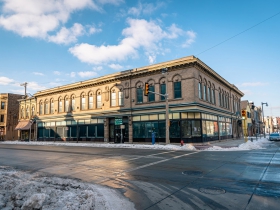 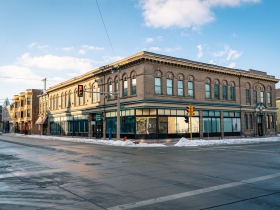 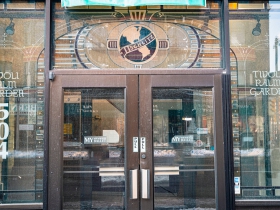 We won’t know the sale price of the 330 Kilbourn office complex. New York-based investment firm Group RMC acquired the two 14-story buildings via a corporate merger, not a traditional real estate transaction. The move shrouds the financial details of the transaction, which includes a nearby parking garage.

The entity that owned the properties, Flanders Westborough Delaware Inc., was an affiliate of Tishman Speyer and was effectively sold to Group RMC.

The buildings, built in 1982 and 1984, fill the East Town block bordered by E. State St., E. Kilbourn Ave., N. Milwaukee St. and N. Broadway. Together, the two towers have 475,313 square feet of leasable space. They sit atop a connecting atrium and 479-stall, underground parking structure.

Following a 2016 renovation effort, Tishman Speyer landed a number of new tenants. But Associated Bank, the largest tenant, is slated to relocate to a building it acquired.

A Colliers leasing brochure lists 95,000 square feet of space available, but Ryan reports that will grow to 200,633 when Associated moves out in 2022. Brokers Matt Fahey and Dan Wroblewski are listing the property.

For more on the complex, see our March 2021 coverage. 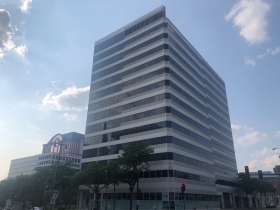 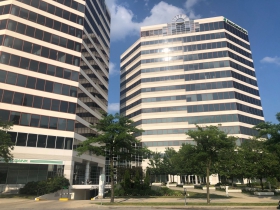 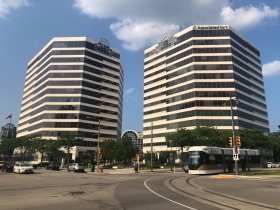 The windows are boarded up on the former William McKinley School, 2001 W. Vliet St., and that’s a good thing.

The condition of the former school has been described as the worst ever seen and the quintessential definition of blight by a series of city officials involved in moving a $12.6 million redevelopment of the property forward.

But why save it? For one, it would be more expensive for the city to demolish it.

Milwaukee’s port director has a plan that he thinks will generate revenue, create jobs and provide enhanced access to an overlooked Lake Michigan pier.

But it comes with a catch. Port Milwaukee must terminate the no-cost lease held by a 62-year tenant, Sea Scouts Ship Invincible 299. The organization, an arm of the Boys Scouts of America, provides sailing training to people ages 14 to 20.

The Dohmen Company Foundation has expanded its footprint in Bronzeville, just a couple months after putting down roots.

The foundation acquired the two-story, 34,000-square-foot building at 2007 N. Martin Luther King Jr. Dr. in December that was long home to Fein Brothers. The redeveloped building will serve as the foundation’s headquarters and its public-facing Food for Health program.

Now it’s acquired the building to the west at 334 W. Brown St.

The new house, located at 3455 N. 3rd St., is one of 80 the organization plans to build in the Harambee neighborhood over the next four years.

The City Plan Commission will gain a new voice under a pending appointment by Mayor Tom Barrett, and it’s one that is likely familiar to regular radio listeners.

Barrett nominated Tarik Moody to serve on the citizen-led commission. Moody, 47, is an on-air host and director of digital strategy and innovation at 88Nine Radio Milwaukee.

A 1996 graduate of Howard University, Moody practiced architecture for more than a decade in Detroit and Minneapolis before joining 88Nine.

How The Milwaukee Tool Deal Works

It was big news seemingly out of nowhere. A public meeting notice revealed that Milwaukee Tool could bring up to 2,000 jobs to Downtown. The proposal signaled several things: the strength of the downtown Milwaukee market, the expectation that employers will bring employees back to office buildings and the big growth plans of a Milwaukee area employer.

But if Milwaukee Tool does go forward with the plan, it’s more complicated than opening up shop and getting cash from the City of Milwaukee. There are hiring counts to reach, investment targets to satisfy, clawbacks that could be invoked and a pandemic-inspired allowance for employees who end up working remotely. There is also the potential of adding four floors to the top of the five-story building.

The plan relies on a Brookfield-based company to continue a growth pattern that over the past 15 years has seen its annual sales grow from $425 million to $5 billion and area employment grow from 250 to 2,000.

The new owners of the business park, Crestlight Capital and TGP Real Estate, announced the selection Monday morning alongside the Milwaukee Downtown business improvement group. The organizations issued a request for proposals in August, offering a $50,000 commission.

“Born and raised in Wisconsin, the opportunity to play a role in the revitalization of Schlitz Park is a dream project for me,” said Gossel, 38, in a statement. “As my largest mural, I can’t imagine a better wall for this one-of-a-kind project. My goal is to create a visually exciting and vibrant mural that celebrates Schlitz Park and the city of Milwaukee — past, present, and future.”