By Tamarine Cornelius, Wisconsin Budget Project - Apr 7th, 2021 05:27 pm
Get a daily rundown of the top stories on Urban Milwaukee

Governor Tony Evers’ proposed budget includes changes that would reshape Wisconsin’s tax code to give less of an advantage to wealthy, by redirecting some of the benefits to the middle class and people with low incomes.

Wisconsin’s tax system is currently a major driver of economic inequality and contributes to the increasing concentration of income and wealth. 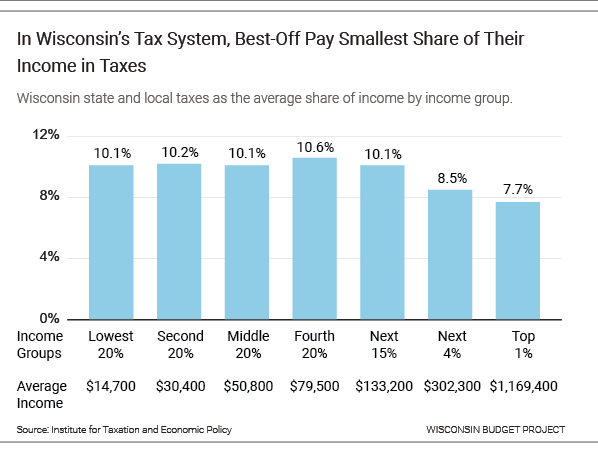 Governor Evers’ budget takes two approaches to reducing the preference that our tax system gives to the very wealthy. The first is expanding tax cuts aimed at people with low and middle incomes, so that people with lower incomes pay a reduced amount of tax. To that end, his budget includes changes that would:

The tax cuts mostly go to taxpayers with low incomes, with nearly all — 92% — going to people with incomes of $40,000 or less, according to a Legislative Fiscal Bureau memo that analyzed the tax changes for which distributional information was available.

The other way Governor Evers is making the tax system less unfair is to close tax loopholes that give an advantage to the wealthy and powerful. Closing those loopholes would increase the amount of tax paid by the wealthy. The Evers budget would:

Most of the additional revenue brought in by tax increases would come from millionaires, with 84% coming from taxpayers with incomes of $1 million or more. 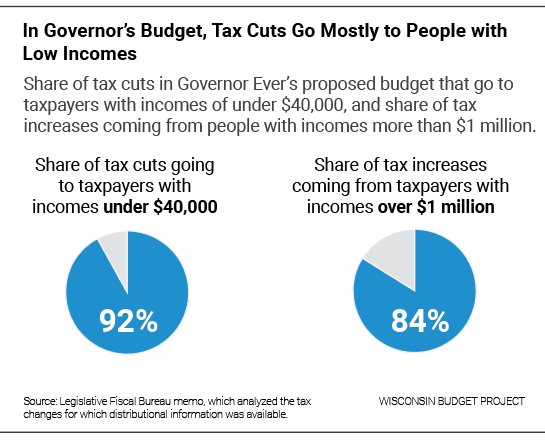 In Wisconsin and elsewhere, the wealthiest have seen their incomes skyrocket in recent decades, while incomes have stagnated for the middle class and those who struggle to make ends meet. Wisconsin’s state and local tax system contributes to the growing chasm between the very rich and everyone else. The tax changes proposed by Governor Evers would help address this.