By Corri Hess, Wisconsin Public Radio - Mar 22nd, 2021 02:27 pm
Get a daily rundown of the top stories on Urban Milwaukee

While marijuana usage is equal across racial groups, Black people are more likely to be arrested and convicted for possession of the drug in Wisconsin, according to a new report from the Milwaukee County District Attorney’s Office.

“There is a lot of established research that shows usage of marijuana is equal across racial and ethnic groups, but what this shows here is a difference in whom this is enforced on,” said Branden DuPont a data analyst at the Medical College of Wisconsin’s Institute for Health & Equity, who co-authored the report.

Racial disparities also persist in convictions for possession. In 2019, Black Wisconsinites were 4.3 times more likely than their white counterparts to be convicted for having marijuana.

But those disparities seem to be on the decline. In 2010, Black people were 9.5 times more likely that white people to be convicted for possession of marijuana in Wisconsin, according to the report.

The report also found that Black convictions for possession of marijuana was driven by counties outside of Milwaukee, despite being home to the majority of the state’s Black population.

In 2019, Milwaukee County, home to 69 percent of the state’s Black population, accounted for only 8 percent of Black convictions for marijuana. 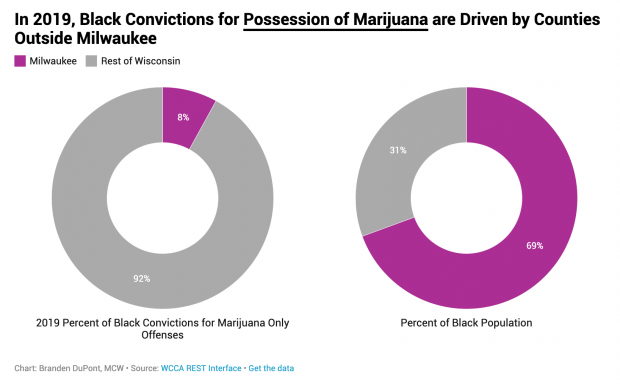 The data released by the Milwaukee County District Attorney’s Office illustrates how Milwaukee law enforcement officials have moved away from arresting and charging people there with minor marijuana possession.

In 2015, the District Attorney’s Office implemented a policy to not prosecute non-violent individuals who possess 28 grams or less of marijuana.

As a result, all marijuana possession conviction categories saw well over 90 percent decreases from 2010-2019. Felony only marijuana convictions saw the largest decrease of 98.7 percent, according to the report. 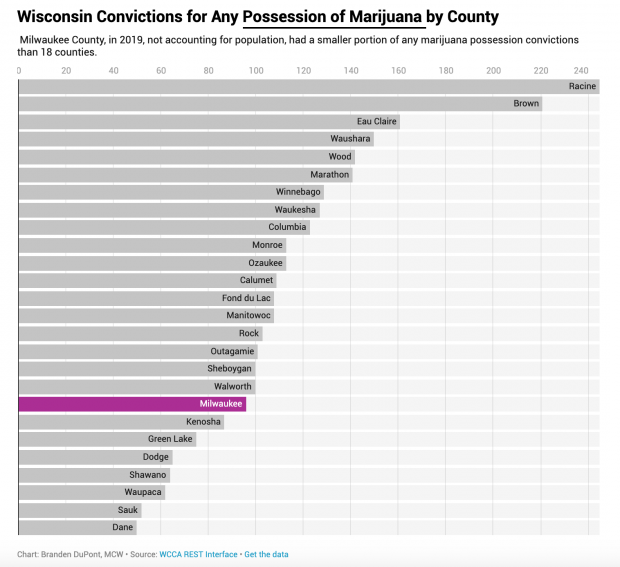 Milwaukee County, in 2019, not accounting for population, had a smaller portion of any marijuana possession convictions than 18 counties. Chart courtesy of the Milwaukee County District Attorney Office

Milwaukee County District Attorney John Chisholm said after studying marijuana arrests and conviction data from his own office, the dramatic racial disparities became clear. He also knew the city needed to focus on violent crime instead.

“One of the commitments that we made really early on, wasn’t a broad statement that we were never going to charge a marijuana case. We believe you can still hold someone accountable, but probably the more effective thing you can do, is direct them on a different pathway,” Chisholm said. “The easy thing to do is charge them with a misdemeanor possession of marijuana, and they’re off to the races.”

Instead, the office has started doing assessments, and looking at individual needs. That could include referring people to counseling, or giving people municipal citations for minor offenses.

“I’ve never felt that it’s my job to categorically say I’m not enforcing XYZ, but I think we can all agree that with limited resources and a really, really serous demand on those resources, we should prioritize the things that impact the community the most,” Chisholm said. “That’s violence. The distinction I’ve made is if the marijuana is recovered in a violent offense, then that’s a different matter.”

Evers’ proposal isn’t likely to make it past the Republican majority in the Legislature. During an interview with WPR in February, state Sen. Van Wanggaard, R-Racine, a former police officer who chairs the state Senate Committee on Judiciary and Public Safety, called marijuana a “gateway drug.”

Chisholm presented the report to the state’s Criminal Justice Coordinating Council on March 3. Lt. Gov. Mandela Barnes is a member of the council. He said the data wasn’t surprising.

“It drove the point home for me, that legalization is the right thing to do,” Barnes said. “Numbers continue to show that people continue to be arrested for the same thing as people are becoming millionaires for in this country.”

Barnes said if the GOP removes the proposal to legalize marijuana from Evers’ budget, he hopes other law enforcement offices across the state will follow the example of Milwaukee County.

“It is a waste of time for small amounts of marijuana to be prosecuted,” Barnes said. “It is a strain on district attorneys’ offices, when there are so many other things that resources should and could be allocated toward.”

Chisholm said he wanted to present the report to the Criminal Justice Coordinating Council to point out racial disparities statewide, but didn’t present his findings as a “gotcha.”

“I experienced the same thing by being committed to objectively analyzing what we do, I certainly looked back in 2007 and 2008 when we had significant disparity in our low-level offenses, I was bothered by that,” Chisholm said. “No one is ever accused of doing that intentionally. It’s to get people to ask questions of why would this be?”

Report: Black Wisconsinites 4.3 Times More Likely To Be Convicted For Possession Of Marijuana was originally published by Wisconsin Public Radio.