MPD denies it, but evidence suggests its police were covertly involved.

By Isiah Holmes, Wisconsin Examiner - Mar 17th, 2021 01:18 pm
Get a daily rundown of the top stories on Urban Milwaukee 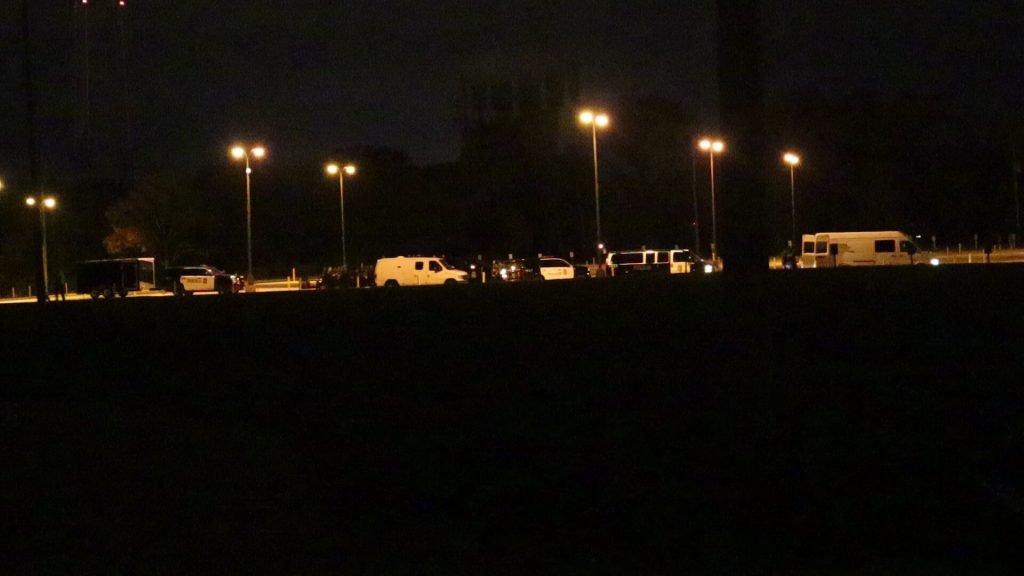 Milwaukee PD vehicles gather in a parking lot during the Wauwatosa curfew in October, 2020. Photo by Isiah Holmes/Wisconsin Examiner.

On Dec. 4, 2020, Wisconsin Examiner received a final response to an open records request from the Milwaukee Police Department (MPD). The request sought any video recorded by MPD personnel during the Wauwatosa curfew two months before. It specifically focused on video and images captured by personnel assigned to surveillance and undercover vehicles during that emergency declaration.

It seemed like a routine request, as MPD officers and vehicles had been seen mobilizing around the border roads separating the two cities. Large white surveillance vans circulated through the streets and uniformed officers watched from dark alleys as protesters flowed in and out of Wauwatosa. So it was a surprise when MPD’s open records office responded with a denial. Specifically the response letter reads, “MPD did not assist the City of Wauwatosa during their emergency curfew order from Oct. 7-10.”

A surveillance van or “critical response vehicle” which was used by MPD during Wauwatosa’s curfew. Photo by Isiah Holmes/Wisconsin Examiner.

Wisconsin Examiner asked the MPD press office to clarify the department’s role in Wauwatosa’s curfew. “Please reach out to the Wauwatosa Police Department (WPD),” the press office replied. WPD spokeswoman Sgt. Abby Pavlik responded to the Examiner’s inquiry by saying, “They [MPD] did not have a role during the curfew.” Pavlik further stated, “The MPD did not allocate surveillance-oriented resources to the emergency declaration.”

But a document uncovered by civil rights attorney Kimberley Motley showed that Wauwatosa police listed the Milwaukee PD as a partner in the response to protests. Motley has filed more than 50 separate lawsuits against WPD on behalf of dozens of people who were arrested or wounded during the curfew.

Titled the “Civil Unrest Operational Plan,” the document detailed WPD’s preparations as a decision loomed about whether to press charges in the police shooting of 17-year-old Alvin Cole. The plan was approved by WPD Captain Luke Vetter on Oct. 6, a day before District Attorney John Chisholm announced that no charges would be brought against the officer who shot Cole in February 2020. It lists 46 different law enforcement agencies, or subsets of those agencies, as “operational partners,” including MPD.

Wisconsin Examiner reached out to MPD again, and asked for comment on a video from the Examiner’s YouTube channel which, at the 12:15 mark, shows a white surveillance van with large computer screens lining one interior wall and a handheld screen or device in the front of the van near the driver. Similar vans are parked at the MPD station which used to house the Neighborhood Task Force (NTF), a unit which was tied to surveillance activities.

Pavlik also stated that two agency partners in Milwaukee’s fusion center, MPD’s Intelligence Fusion Division (IFC) and the Southeastern Threat Analysis Center (STAC), run by the Department of Justice, “served in an advisory role, as they do during any county-wide event” in Wauwatosa. Pavlik added that, to her knowledge, no STAC or IFC personnel were physically on the ground in Wauwatosa during the curfew. Neither partner in Milwaukee’s fusion center was listed in the operational plan.

But the Justice Department’s Division of Criminal Investigation, which is linked to STAC, was on the list. The Green Lake County Sheriff’s Department was also filmed by Wisconsin Examiner inside Wauwatosa during the curfew. That agency is also not listed in the operational plan. Dozens of law enforcement agencies, including two federal agencies, mobilized to assist in the Wauwatosa curfew. Some were on the front lines as officers shot, gassed, and chased protesters out of the suburb.

Besides MPD, the operational plan lists U.S. Marshals, who worked alongside WPD’s Special Operations Group grabbing protesters from the streets and ambushing car caravans. Both the Wisconsin State Patrol and the Federal Bureau of Investigations (FBI) flew surveillance aircraft overhead, according to the plan.

The operational plan also details rules of engagement for officers and identifies key staging areas used by police. The document also shows that both WPD and the Waukesha Sheriff’s Department deployed aerial drones. Important structures such as the Wauwatosa Police Department, and Mayfair Mall are listed, as well as procedures for prisoner transport. WPD’s ops plan is just one of numerous documents recently obtained by Motley as part of her ongoing lawsuits.