After Prison, What Next?

How to handle the formerly incarcerated. Milwaukee town hall tackles the issue.

By Isiah Holmes, Wisconsin Examiner - Feb 25th, 2021 01:50 pm
Get a daily rundown of the top stories on Urban Milwaukee 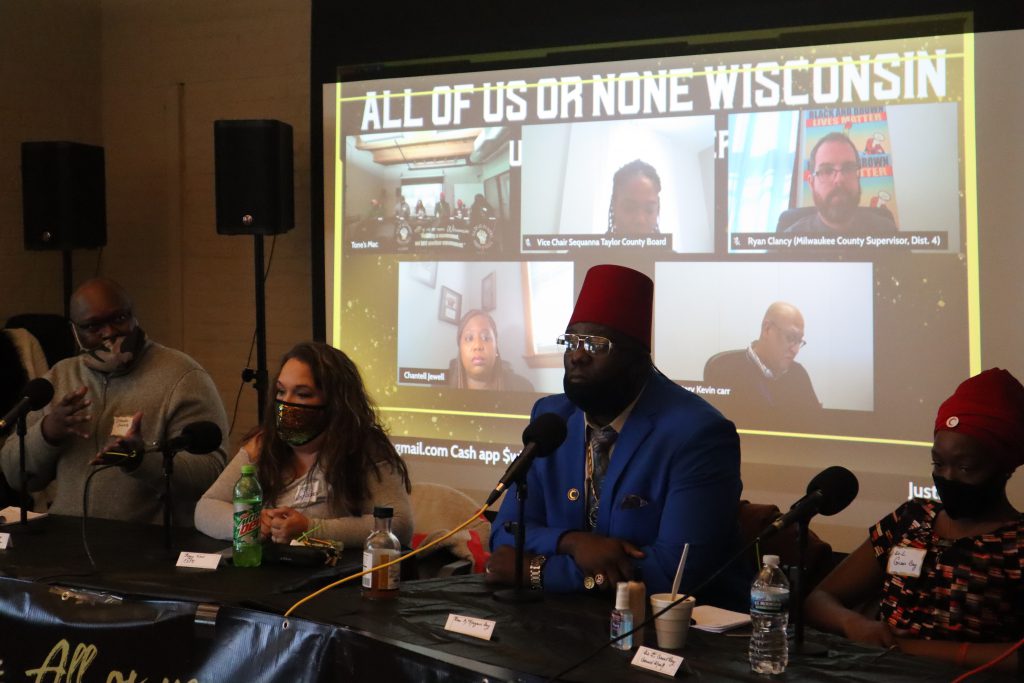 The All of Us or None Wisconsin event in Wisconsin. Photo by Isiah Holmes/Wisconsin Examiner.

Can the state do a better job of helping formerly incarcerated people make a successful reentry into society? A recent town town hall-style event in Milwaukee featured personnel from the Department of Corrections and people directly impacted by incarceration. The Feb. 20 panel was part of a series of discussions with state and local officials on equity and justice issues in communities across the state.

Called the “Our Quest for Democracy” series and hosted by the group All of Us or None Wisconsin, the virtual and in-person events bring local and state officials together for public discussions. The 12 panelists included Department of Corrections (DOC) Secretary Kevin Carr, Milwaukee County Supvs. Sequanna Taylor and Ryan Clancy, organizers from All of Us or None Wisconsin and Milwaukee community organizer Vaun Mayes. Members of the public attended the event in person, while an additional audience watched from home over a video feed.

One panelist, Wendel Hruska, a re-entry specialist with Project Return, emphasized the need for housing support for formerly incarcerated people returning to the community. “Without stable housing, everything else sort of falls apart,” Hruska said. “So when we’re talking about trying to expand mental health services here in the Milwaukee area, or when we’re talking about employment opportunities, everything else kind of hovers around the opportunity to have stable housing.”

Reducing the prison population and ensuring stable re-entry for formerly incarcerated people have become priorities for the administration of Gov. Tony Evers. In July 2020, more than 21,000 people were in the custody of the DOC. And slightly more than 65,000 additional individuals were on probation or parole. As of Feb. 19, 2021, the DOC’s incarcerated population stands at 19,683 people, while another 63,089 are on probation or parole.

Carr explained that the Evers administration is attempting to assist re-entry by offering educational options. “Wisconsin DOC offers a multitude of educational and vocational training opportunities for folks we care for in our facilities,” said Carr, explaining that incarcerated people have access to adult basic education, GED programs and financial literacy courses. “As a matter of fact, on January 15 of this year, I attended the very first graduation of 14 graduates from [Milwaukee Area Technical College’s] associate degree program, that was all done online by folks who were in custody,” said Carr. And that’s a program that, since I’ve been secretary, we’ve been expanding. And we hope to expand to every facility that can accept it.”

Carr repeated his commitment to education in prisons, saying, “I believe that from the moment that person walks through our doors, for whatever reason, if they sincerely want to change their lives and engage in programming, we have an obligation to provide it.”

Carr mentioned that the DOC faces challenges when it comes to programming. Classes have long waiting lists due to limited resources. The secretary is encouraged by aspects of Evers’ proposed budget that would help expand programs. Sean Wilson, of the American Civil Liberties Union (ACLU) of Wisconsin’s Smart Justice campaign, also mentioned promising aspects of the budget, but said it was not a “dream budget.”

Also on the panel was Chantell Jewell, superintendent of Milwaukee County House Of Corrections (HOC), who noted that the facility shouldn’t be forgotten when it comes to discussions about allocating resources.

Mayes, one of the panelists who has experienced incarceration, stressed the need to guide incarcerated people through whatever programming and housing infrastructure is available to them. “Informing and educating them to the issues and landscape of equitable resources that they may not aware are available,” said Mayes. “We shouldn’t be releasing them and leaving them to find out these things on their own.”

Latoya Greer-Bey, an organizer with All of Us or None in Madison, added the perspective of incarcerated women returning to the community.

“We have to take into consideration that people are being taken from their homes, and taken from their families,” Greer-Bey said. “So they’re not able to go out and provide for their families, and provide for their households. So, naturally, there’s no finance when they come home. Then they come home and they’re separated from their children. Now they have to figure out how to get a job. Once you figure out how to get a job, you can’t get the job because of your background.”

This cycle, Mayes and Greer-Bey say, is fueling the repeated re-incarceration of people.

When given an opportunity to speak, members of the audience, many of whom have experienced incarceration themselves, echoed these concerns. At moments, the raw frustration and emotions of struggle following their stints of captivity became palatable as they shared their stories. One man named Lee spoke from his experience after 16 years in prison.

After leaving prison, Lee described the motel he was placed in, since he did not have a place to go after being released. “This place has me physically sick,” he said, fighting back tears, “because of the roaches, because of the mice, because of the filth of the people who take care of it. I had a respiratory infection for four months, because I have no other place to live. This place is costing me $1,160 to live in a rat trap that’s full of crackheads and drug dealers. And you expect me to be successful on re-entry?” Lee continued, “I’ve been out over two years and I thank god that I can persevere to this.”

Housing and programming becomes even more pressing when discussing the fate of Wisconsin’s incarcerated juveniles. The proposition of closing Lincoln Hills and Copper Lake, which hold teen boys and girls, respectively, has been debated since Evers was elected. Part of the logic behind closing the facilities is to help move those teens to new facilities closer to their communities. When such facilities were proposed in Milwaukee, however, the community rejected them.

The panelists addressed this social stigma during the meeting. Sup. Clancy pointed out that his attempts to visit the juvenile facilities have been denied by DOC. When Clancy asked Carr about the denials, the secretary responded that the supervisor’s visit requests will be granted “when it’s appropriate.”

Clancy added that while the county is working to expand housing initiatives for formerly incarcerated people and others, many policy and budget limitations can be traced back to an uncooperative state Legislature.

“Many of us went in and turned the cells into classrooms,” he continued. “So that when we came out, we could stand before the community, policy makers and legislators, and let them know this is what needs to happen. Here are some viable solutions to address the problems that you don’t seem to be able to address.”

All of Us or None is planning another panel discussion, both virtual and in-person, on March 20. The topic of discussion will be policing and the main panelist will be acting-Milwaukee Police Chief Jeffrey Norman. Like the incarceration-focused meeting, the policing edition will be held at a community center at 2821 N. Vel R Phillips Ave. in Milwaukee. The event will also be streamed over Facebook live.

One thought on “After Prison, What Next?”