The Education of Sherwin Hughes

Talk show host for 101.7 The Truth talks about growing up in Milwaukee. 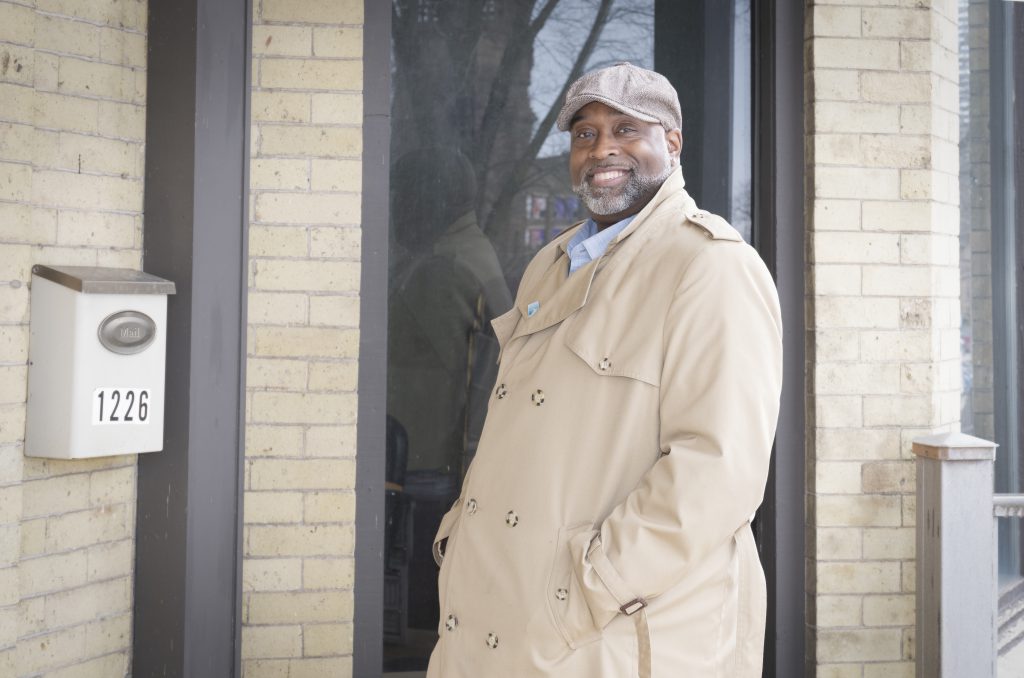 Milwaukee has a new Black radio station, 101.7 The Truth, launched in early January. The station features an all-talk platform that embraces Milwaukee’s Black community. The talk is challenging, with strong perspectives about what’s happening in Black neighborhoods. The young station manager, Kyle Wallace, shared his reasoning for the new format. “Black voices don’t have enough platforms. Our philosophy is that listeners shouldn’t just hear just one perspective. Our mission is to expand perspectives. The talk is raw, honest, and true as to what’s really going on in Black Milwaukee.”

Good Karma Brands owns the station and has hired all Black management and on-air talent who are versed in the Milwaukee Black experience. The targeted audience is primarily the Black citizenry.

I met the station’s mid-morning talk show host, 45 year old Sherwin Hughes, on the East Side. He wore a slick 1940s-style tan raincoat and exuded cool. He talked about his relationship with Milwaukee. Hughes grew up in Brown Deer and went to Brown Deer High School. “My parents both worked,” he said. “That area had mostly white neighborhoods. But some of my family members lived in the central city, and I spent a lot of time down there after school. I grew up in both worlds, you could say.”

Hughes explained the gang culture on the north side in the 1990s. “We hung out at Northridge Mall. There were kids from the northern inner city there, too. Drug dealers were everywhere. A number of high school dropouts got into drug dealing because they could make money. Crack cocaine became ubiquitous. There was a restaurant called Chi’s Chi’s. The cooks sold crack. Parking lot was often full of kids doing drugs. The gangs were strong. If you were affiliated with a gang, you’d be protected. You could sell drugs on the turf controlled by that gang. Most young Black men from the central city were affiliated with a gang. There were gang fights.  One of my friends, Marquis Shaw, was shot to death on his front porch. As for me, I just wanted to be friends with everyone. I wasn’t in a gang. I had a solid family unit, but most boys considered their gang their surrogate family. It was exciting. Even the music, Hip Hop and Rap represented the gang culture.”

Hughes escaped the gang scene through education. For his first two years of college, he attended UW- Oshkosh, but he ultimately graduated from UW Milwaukee in 2000 with a major in sociology. “Our commencement speaker was Vel Phillips,” he said. “She inspired me to be a community organizer.”

During his last year at UW-Milwaukee, Hughes served as an intern with the Milwaukee Idea which was designed to help more young Blacks get into college. At the YMCA Community Development Corporation, he was paid $7.50 an hour. He worked on problems in the area between 8th St. and 20th St., North Ave. and Locust Ave. It was a learning experience.

“Since I grew up in Brown Deer, I could see how different I was, how I spoke, how I dressed. But I was able to connect. I loved my work.  Eventually, I was hired full time and I got to see what life was like on the other side of segregation. Brown Deer was lily white. These neighborhoods were almost all Black. We created block clubs and neighborhood watch groups and took on issues like how to fight crime. The goal was to get the residents more committed to neighborhood safety, calling the police on the bad actors. They built a brand new YMCA on Hadley and Teutonia around a new development called Lindsay Heights. I did that community work for two years.”

Hughes got his start in politics working in Congressman Tom Barrett’s office when he was running for governor. But Barrett lost, and Hughes next worked for Milwaukee Public Schools managing after-school programs.  The goal was to keep kids in school longer to make them less likely to be victims or perpetrators of crime. Two years later, he worked for the John Kerry Presidential campaign. After Kerry lost, Hughes worked for Barrett in the mayor’s office. That helped him get appointed by Governor Jim Doyle to serve on the State Elections Board, where he was elected board chair. He went on to serve a year as communications director for State Sen. Lena Taylor.

Hughes’ entry into radio was fortuitous. “During the Recall Scott Walker campaign in June of 2012, the Black radio station WNOV did 13 hours of programming called Election Central, guests, interviews, voter call-ins.  They had me host the first hour, but I did so well, I ended up hosting for eight hours. In July of 2012, WNOV hired me as a full time morning radio talk show personality. I called my show ‘The Forum’. I did that show until 2018. Then I did a year at another station.”

In January 2021, Hughes moved his program to 101.7 The Truth. The station is owned by the corporation, Good Karma Brands, that also owns WTMJ. “I heard they were starting a Black radio station. When I found out who the other hosts were, I came on board. I’m allowed to talk about whatever I want to, but my audience is primarily Black. This is encouraging because as an African American man, I may have content that is offensive to white people. I told my superiors, ‘I may say some offensive shit,’ and they said, ‘Sherwin, we want that.’”

His show is called The Truth With Sherwin Hughes. His listening audience is 85% African Americans who have at least some college and are mostly women from the Milwaukee area.

Hughes says that inner city neighborhoods, areas like zip code 53206, have gotten worse and there is a feeling that the local politicians have let them down. He said that the major problems are crime, drug dealing, car theft, reckless driving, and domestic violence. Local leaders think that it’s important to start the recovery by building up the economy, with Black- owned businesses, investment in infrastructure and real estate.

“There are no places a resident can go to get a job or get a career that pays a wage to work yourself out of poverty, own a home, build equity, put your kids through college. Those jobs generally exist out of the realm of public transportation. If you lived in situations where there is no hope and just despair, you would feel angry, resentful. There are angry young men, many of whom don’t care about themselves because they have no hope, no future. Some turn to crime. Jail or an early death might be their future.”

Hughes brought up a subject that he speaks about often, education in the local schools. “The education system in Milwaukee is nothing short of deplorable. Most graduates of a Milwaukee public high school need two additional years at a community college to prepare for a 4-year college. I support school choice, and I’ve been lambasted for my position over the years. Think about this. If you have money, you can move to a better school system. If you are poor, that is not an option.” He sends his daughter to Hartford High School in a suburb northwest of Milwaukee.

Hughes talked about Black central city culture versus suburban or small town white cultures and the different ways of talking, dressing, music, and so on. “Prejudice is based on ignorance and fear. But I have been seeing some suburban whites, especially young whites, championing Black Lives Matter. They now see something they never really had to deal with. They knew nothing about the central city culture other than what they see in the media.”

These are the kind of observations you’ll hear on The Truth With Sherwin Hughes, Monday through Friday on 101.7 FM between 10 a.m and 1 p.m.  Other talk shows with local hosts run throughout each week day on the station from 7 a.m to 6 p.m.