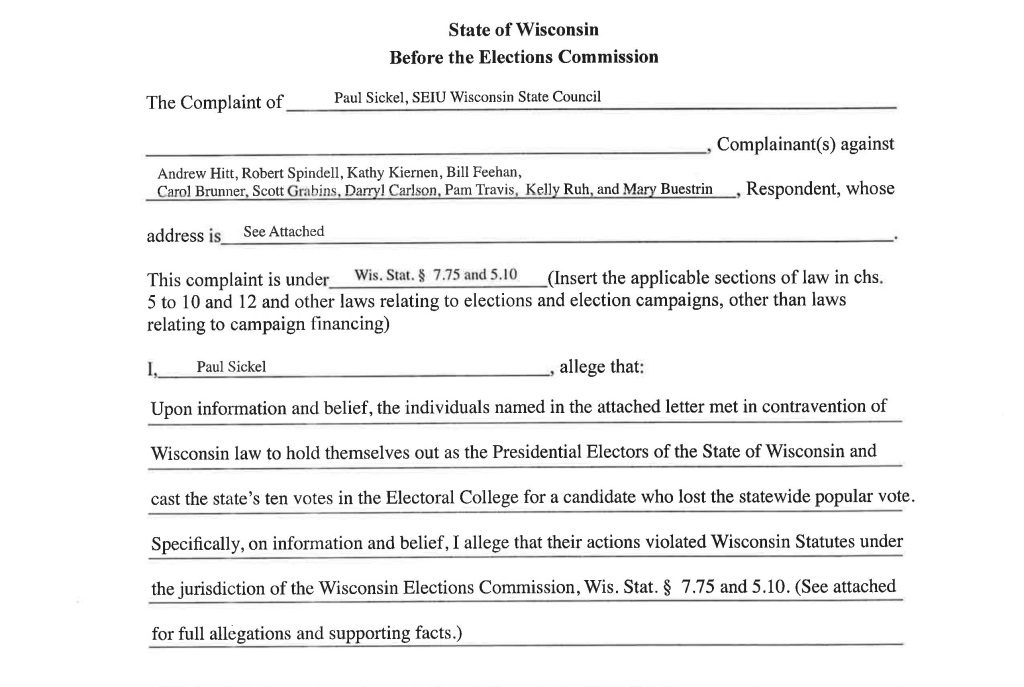 On December 14 the Wisconsin Supreme Court ruled against Donald Trump’s challenge to the state’s presidential election, and affirmed Joe Biden as the winner. It was the last gasp for Trump, and left him with no other legal options in Wisconsin. Accordingly, Gov. Tony Evers assembled the 10 duly authorized Democratic electors to sign official certificates casting the State of Wisconsin’s ten electoral votes, which were then mailed in an official documentation of the state’s electoral vote, to be read and tallied when Congress counted the electoral votes on Jan. 6.

But even as this official, public certification was happening, a group of Republicans also gathered in the Capitol to commit “a grave and brazen offense against our democracy,” a legal complaint charges. “Ten individuals, impersonating the legally selected and authorized Presidential Electors of the state, flouted the will of the people as expressed at the ballot box and fraudulently attempted to misappropriate Wisconsin’s participation in selecting the next President of the United States.”

The purpose of these “fraudulent electors,” the complaint charges, was “that the false documents they produced be received as valid documentation for the purpose of inducing the United States Congress to credit the wrong candidates with having earned Wisconsin’s ten electoral votes.”

All of which clearly violates the law and should be criminally prosecuted, the complaint by Law Forward, a liberal legal advocacy group charges. The complaint was filed with the Wisconsin Elections Commission and a letter was also sent to Milwaukee County District Attorney John Chisholm, as two of the ten involved in this plot live in Milwaukee County.

The complaint charges, among other things, that the 10 Republicans are guilty of (1)forgery, (2) falsely assuming to act as a public officer, (3) conspiracy to commit criminal acts and (4) misconduct in public office. The last offense, the complaint contends, can be charged because the perpetrators purported to be public officers.

Who are these 10 people? They are pillars of the Republican Party, most of whom have been party activists for decades, all of whom would have been the state electors had Trump actually won the election. All of them were well-versed in how elections are supposed to be legally conducted. Here is what Urban Milwaukee was able to learn about them:

Andrew Hitt: Chairman of the state Republican Party and an attorney with Michael Best, Hitt previously served as Governor Scott Walker’s deputy legal counsel and before that as an assistant district attorney in the Violent Crimes Unit of the Milwaukee County District Attorney’s Office. He was recently interviewed by Mike Gousha “On the Issues,” to discuss the future of the Republican Party.

Robert Spindell, Jr: He serves as a Republican appointee to the Wisconsin Elections Commission, which means he can vote on whether to investigate himself. He has served as senior vice president with the Milwaukee office of Gottesman Co., one of the nation’s largest mergers and acquisitions firms. Spindell was a Trump supporter in 2016 and political donor to Gov. Walker.

Bill Feehan, chairman of the La Crosse County Republican Party, which was barred from posting information on Facebook in October for repeatedly sharing false information. He was an unsuccessful GOP candidate in 2012 for the state Senate. Feehan informed the press he had traveled to Madison to cast his electoral vote for the presidency, as though he was a legal elector.

Kathy Kiernan: A Republican National Committeewoman who served as a delegate to the 2016 Republican National Convention as a supporter of Ted Cruz, but told the media she “loved” the acceptance speech by Trump. According to Linked In, she is based in Richfield and is “Retired and enjoying life.”

Mary Buestrin: A vice chairwoman for the Midwest region of the Republican National Committee, she lives in Mequon. She “has been active in Republican campaigns since 1960,” according to Ballotpedia, including serving in 2000 as the state grassroots chairman for the State Steering Committee of Wisconsin for the George W. Bush. “In the following year, she worked on former Wisconsin Governor Scott McCallum’s (R) transition team… Buestrin has attended nine Republican National Conventions and served as a delegate at eight.” Before choosing to be a fake elector, Buestrin served as a legal elector in 2016, casting a vote for Trump.

Edward Scott Grabins: A chairman of the Dane County Republican Party, who wrote an op ed predicting that if Biden was elected there would be violence and looting in every city in America.

Darryl Carlson: As a member of the Marine Corps Reserve (2002-2011), he served two combat tours in Iraq. He was elected as a City of Sheboygan Alderman (2011-2016) and served as the Council Vice President. An unsuccessful 2014 Republican candidate for the state Assembly.

Kelly Ruh: The 8th Congressional District GOP chairwoman was a delegate to the 2016 Republican National Convention as a Cruz supporter. She has written op eds, including a column for WisPolitics lauding the Trump economy and his speech in Green Bay in April 2019 “as the start of another wild ride to victory.”

Pam Travis: Treasurer for the Wisconsin Federation of Republican Women, who resides in Clark County and served as an alternate delegate to the 2016 Republican National Convention.

All mainstream Republicans. All willing to overturn American democracy.