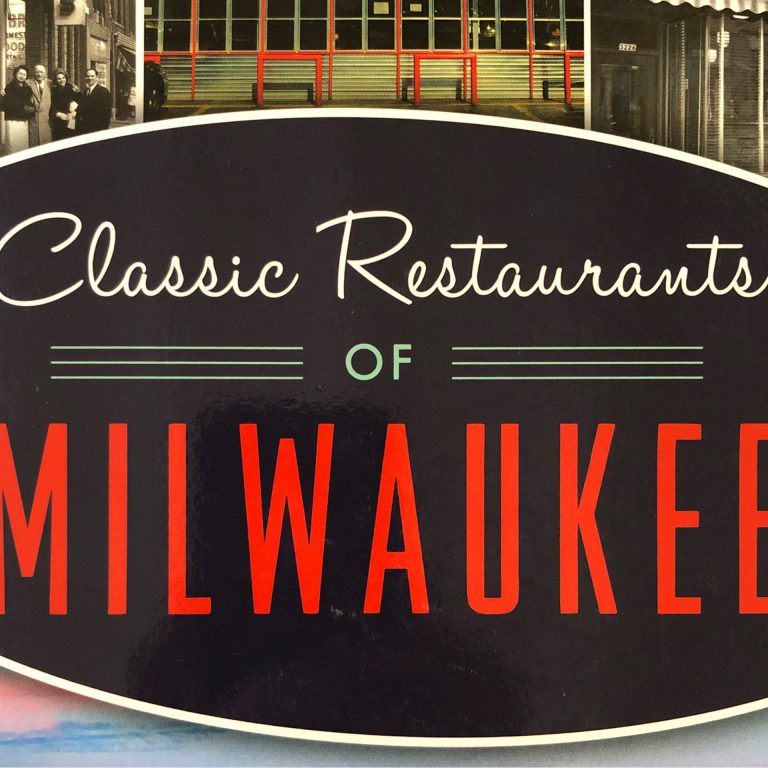 Milwaukee has far exceeded its former bad rap from the days when we were known for beer, brats and bowling, with a dish of custard on the side. The city has an impressive history of memorable restaurants from classic Sicilian dishes at Giovanni’s, to French cuisine in The English Room at the Pfister, to Mr. Perkins, known for soul food and meatloaf.

In Classic Restaurants of Milwaukee, author Jennifer Billock describes approximately 150 historic restaurants, some still serving their specials, many lost to history. The book is a tasty sampling of those 150, surely pruned from a longer list, but chosen for their backstories, unique menus, or perhaps, longevity. In this eclectic collection, you will read about fine dining at Grenadier’s, their white tablecloths and black-clad waiters, and on the next page, Speed Queen Bar-B-Que and crispy pork shoulders.

In the intro, Billock writes about the predominantly German population in Milwaukee in the 1800s. She notes the influence of German cuisine with five popular Germen restaurants, Mader’s, John Ernst, Karl Ratzsch’s, Kegel’s, and the Bavarian Inn, now the Bavarian Bierhaus. Today there are three, Mader’s, Kegel’s, and the Bierhaus, but it’s reassuring to know you can still get Sauerbraten and Wiener Schnitzel in Milwaukee.

The Italian influence was also prevalent, especially on the East Side, where five notable restaurants, according to Billock, had mafia ties. For example, the Balistrieri family, former local mafia bosses, owned Snugs, the restaurant on the ground floor at the Shorecrest Hotel. At a back table, a red telephone came in handy to conduct Balistrieri mob business. This lasted until the FBI tapped the phone.

Murder was on the menu at one of the Fazio Family restaurants, a known hangout for the mafia mob, where Louis Fazio was murdered, possibly the outcome of an argument with Frank Balistrieri.

Then there was Sally’s (Papia) Steak House, another hot bed of mafia activity, where a tenderloin served under a pile of fried onions was the house special. When one of Papia’s chefs opened his own restaurant, Papia hired someone to burn it down. She later spent time behind bars for extortion and conspiracy.

More blood was spilled at Giovanni’s, a restaurant popular with the local mafia, and famous for its Sicilian dishes made from generations-old recipes. Manager Max Adonnis met his end when two men came to the restaurant and shot him in the head.

One of Milwaukee’s most unique restaurants, Frenchy’s, was pricy, but popular with diners looking for something different. Not only did the waitstaff dress in French maid outfits, the menu included a variety of meat not often, if ever, seen on local menus, such as tiger, lion, boar, bear and hippo. Chef Paul La Pointe grew up poor. He claimed he opened Frenchy’s “in order to eat,” his son Reggie later told the Milwaukee Journal Sentinel.

Anyone who has lived here for more than a few years will have at least one favorite classic not mentioned in the book, for example Sanford. I paged through “Dinners” many times to be certain it was actually missing. It’s not there and neither is Polonez, which, in my opinion, is an important omission. The Polish were some of Milwaukee’s first settlers, especially around Brady Street, and on the south side between Mitchell and Lincoln streets. Polonez at 6th and Lincoln, now in St. Francis, beloved in the Polish community, has served their stuffed cabbage and pierogi since 1983.

In “From the Homeland,” Billock included Abu’s to represent Middle Eastern cuisine, Three Brothers for their Serbian dishes, especially their Burek, Toy’s for Chinese food, and a lone representative of Hispanic Milwaukee, Conejito’s. In that same section, Billock listed seven places known for pizza. As a curious reader, I wanted some classic Italian restaurants. Perhaps the aforementioned restaurants with the mafia connections represented the Italians, but there were more: Nicolo’s on Brady Street, Mama Rosa’s Calderone Club on the East Side, and who can forget Albanese’s in Riverwest, with their chilled house red and homemade pasta.

As I reader, I also wanted to know where the restaurants were located, and whether or not they are still around. Sometimes the verbs in the text let me know their status, past or present tense, but more definitive information would have satisfied my curiosity.

The book is a reminder that Milwaukee has a rich and varied culinary history. Billock did a good job of choosing not just high-end restaurants, but also burger joints and fast food places, especially the ones with a quirky history. Black-and-white photos add to the stories, making this an interesting, albeit incomplete, reference for people who want to know more about Milwaukee’s classic restaurants.