By Isiah Holmes, Wisconsin Examiner - Feb 8th, 2021 10:53 am
Get a daily rundown of the top stories on Urban Milwaukee 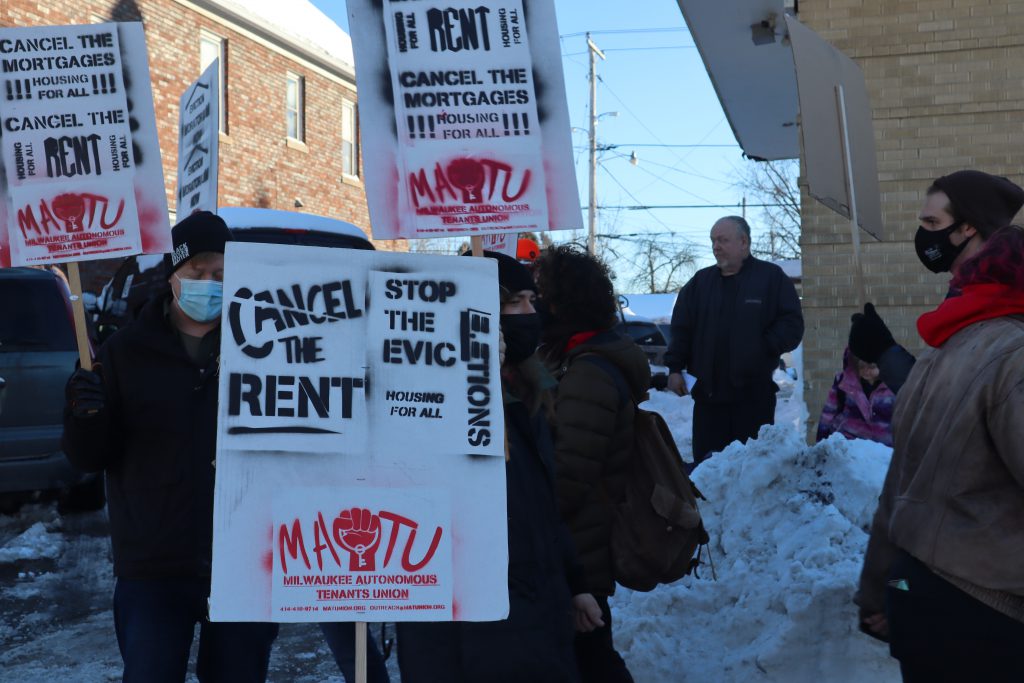 On the evening of Feb. 1, as Marlene Peace, a Milwaukee resident and grandmother, stood outside the doors of S2 Real Estate in Milwaukee, her frustration rose as the temperature continued to drop.

Peace had traveled to the building hoping to help her daughter pay her rent. “I’m here because my daughter has a special needs child,” she tells Wisconsin Examiner. “So I would’ve been coming here with her, just to do this, and then they’re not even open.”

Building staff decided to lock the doors after the Milwaukee Autonomous Tenants Union (MATU) organized a small picket on the sidewalk in front of the building. Even tenants arriving to pay rent in person were refused entry. Robert “Bobby” Penner, an organizer with MATU, said the group chose to picket S2 because of the company’s high rate of eviction filings. Penner noted that S2 Real Estate currently has more than 40 open evictions in the circuit court.

Since September, the company has evicted 82 tenants, despite the federal moratorium against such actions due to the pandemic. The company houses around 550 tenants. Employees at S2 told Wisconsin Examiner that the owner, Sam Stair, wasn’t available for comment.

“We’re not going to drop this,” said Penner, arguing that landlords like S2 should be accountable to the people they rent to. When Penner and company arrived, he noticed how the building’s staff responded by locking the door. “They’ve already decided that they don’t want anything to do with us,” he says.

The activists marched in circles in front of S2, chanting, handing out fliers and earning supportive honks from passing cars. Peace wasn’t part of the organized picket but she and other locked out tenants expressed discontent: “When these tenants come to pay their rent and [S2 Real Estate] are mad because they’re on a piece of property, they ain’t scared then. So why are you scared of this?”

Peace added that that staff members are sometimes rude and that the companies such as S2 are taking advantage of low-income tenants. “They pass through the properties,” said Peace, “and you’re stuck in there with roaches, and mice, and plumbing that ain’t working, and you’re sitting there waiting. And then they don’t get nothing done.”

Penner says this type of situation is common in low-income neighborhoods. “What they do is they rent to low-income people on purpose — people that have one, or two or three evictions on their records. They charge them double security in order to rent their apartments.”

After people fall behind, he adds, unscrupulous landlords evict people and keep their double security deposits. “That’s how they make a profit,” he says. “So they don’t maintain these buildings they own because they know people aren’t going to be there long.”

Penner feels the federal eviction moratorium, which was recently extended, is not enough. “There needs to be a statewide moratorium,” he says. “We want to shut down the circuit court from filing evictions. Because even getting a five-day notice turns your world upside down.”

One thought on “City Activists Call for Rent Cancellation”