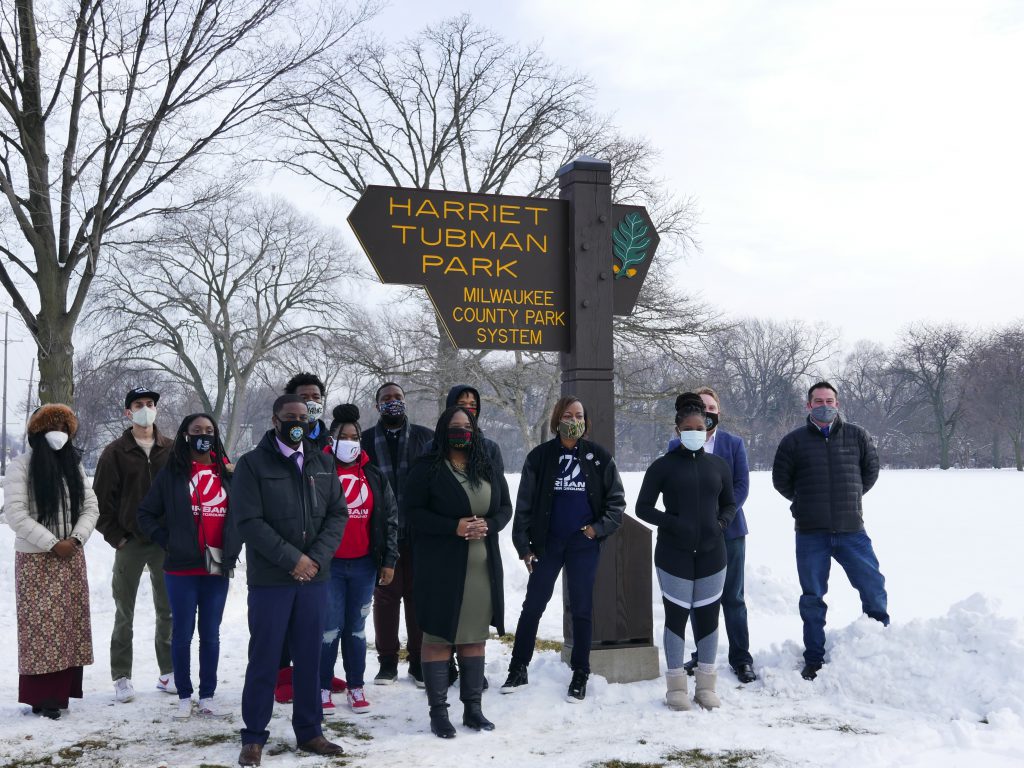 In September, the Milwaukee County Board voted to rename Wahl Park, located on the 4700 block of W. Hampton Avenue, for the famous abolitionist and underground railroad conductor Harriet Tubman. On Wednesday, the sign for the park was unveiled at a ceremony celebrating the official name-change.

Supervisor Sequanna Taylor represents the area and authored the resolution renaming the park. She explained that changing the name of the park was a “step in a larger movement” as Milwaukee County continues to work towards achieving racial equity.

“It isn’t just about renaming a park to me…  It goes a lot deeper in Milwaukee, when we talk about systematic racism,” she said.

Taylor started pushing for the new name this past summer after community discussions indicated there was interest in renaming a park to better represent the community, and Tubman’s name kept coming up.

The park was created in 1956 and originally named for Christian Wahl, a 19th century German immigrant to Milwaukee who was a leader in the formation of the parks system. Wahl’s true passion, which bordered on obsession, was Lake Park. There are plans to have a bust of Wahl, currently in Harriet Tubman Park, moved to his beloved Lake Park.

Like many northern states, Wisconsin was a stop for many on the underground railroad. In Milwaukee, the Samuel Brown Farm, located in what is now the Lindsay Heights neighborhood on the near North Side has been documented as one such stop, offering shelter to people escaping slavery in the south.

Mia Moore, a member of the youth leadership organization Urban Underground, said Tubman “is legendary for helping enslaved Africans escape a horrific life of oppression by transforming their existence into freedom through the underground railroad.” And added that, “We’re excited to see the spirit of Harriet live on in the renaming of this park and forever in our hearts.”

Get a daily rundown of the top stories on Urban Milwaukee
The name Urban Underground has an obvious tie-in to the underground railroad in its name. The organization, as Moore said, “has provided pathways for young people to find a purpose, voice and power in our community.”

Sharlen Moore, Urban Underground executive director, joined Taylor and others at the unveiling and said that the naming of monuments and buildings is a way for a community to reflect back to itself what is important. Something Taylor herself wrote into the resolution renaming the park. It reads, “The naming of a monument reflects who and what we think is important, as well as our values as a community and Milwaukee County is committed to ensuring that its monuments, including its parks, are named after those individuals or communities that reflect our County’s dedication to racial equity.”

Moore said representation for the Black community and youth in Milwaukee is important, “it gives you that pride and that feeling that ‘I also belong here’ so renaming the park to Harriet Tubman Park is one of those ways for us to really commemorate black history.”

Taking action like this “really boils down to leadership,” Moore said. When elected leaders makes an effort to represent the community it serves, she said it shows a “higher propensity” for thinking about the needs of that community.

This was exactly the message shared by County Executive David Crowley — an alumni of the Urban Underground. He noted that some levy the criticism that renaming a park doesn’t do enough. To this he said, “We want to show people that we are looking to make steps and making sure that we are representative of this community… There has been systemic racism and discrimination for a very long time in municipal government. But we’re taking a hard look within Milwaukee County Government to see what we can do, to not only right those wrongs, but to chart a path forward so we can talk about racial equity.”