Why So Many Police Chiefs? 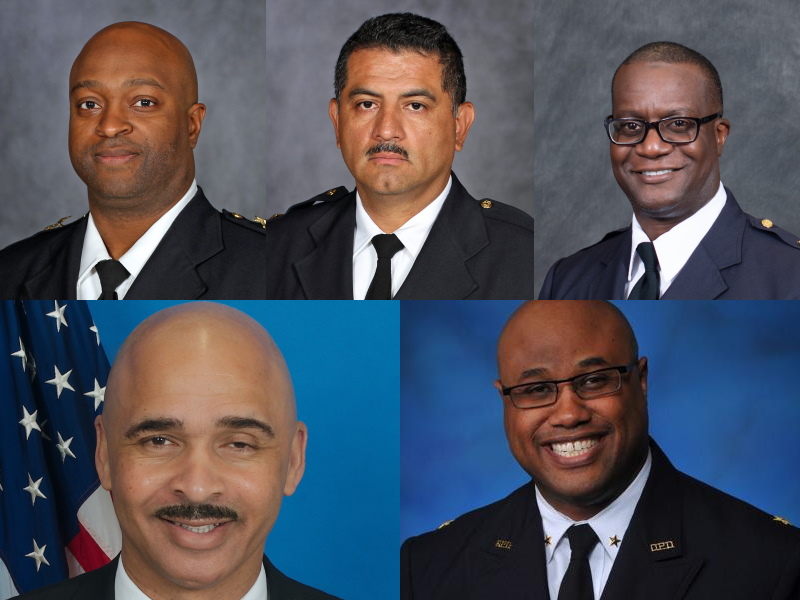 Last week Urban Milwaukee’s indefatigable reporter Jeramey Jannene, who covers City Hall among other beats, had one of his better tweets:

The court ruled that former Milwaukee Police Chief Alfonso Morales had been demoted from the position without due process and could in theory reclaim the job. Meanwhile Jeffrey Norman had just been appointed acting police chief, to replace Michael Brunson was still finishing his time as acting police chief and the Fire & Police Commission (FPC) had a tie vote on whether to appoint Hoyt Mahaley or Malik Aziz as a permanent choice for police chief.

“What the hell is going on?” I’ve had people ask me. I’ll try my best to answer.

Let’s start with Morales. There were reasons to consider disciplining or removing him. He wore out his welcome with community activists, due to the department’s use of tear gas and rubber bullets on Black Lives Matter marchers and his tone-deaf statements, for instance that the police were being crucified like Jesus by protesters. He also seemed ethically challenged, as Urban Milwaukee has explained.

But the FPC’s handling of this was incredibly high handed. In late July the commission gave Morales a long list of difficult directives with little time to comply and just two weeks later voted to oust the chief before his time to complete the directives had expired.

City Attorney Tearman Spencer later admitted the FPC hadn’t given Morales due process, which made it pretty easy for lawyer Frank Gimbel to sue the city on behalf of Morales. A judge has ruled that Morales must be restored to his position.

Morales has little interest in returning to the job. “Who would want to walk back in that situation?” Gimbel says. “The FPC is dysfunctional.” He says Morales had a contract through 2024 and is owed at least $450,000. Settlement talks with the city are likely.

To replace Morales, Brunson was appointed acting police chief back on August 6 and has announced he will retire on December 26. This gave the Fire & Police Commission nearly five months to choose a permanent police chief, which they have somehow failed to do.

The commissioners did a national search and were able to narrow the list of candidates to three finalists by late October. These included Mahaley, an FBI Supervisory Special Agent, who is a graduate of Milwaukee Public Schools and previously worked for the Milwaukee Police Department, Aziz, a major within the Dallas Police Department and Chris Davis, a Portland Police Bureau Deputy Chief.

But then a problem arose: Commission board member Raymond Robakowski announced he was resigning, after calling board chair Nelson Soler a “dictator.” And this left the commission with just six members, who proceeded to have a tie vote of 3-3 — on whether to pick Mahaley or Aziz. Both are good choices so please pick one, Mayor Tom Barrett urged. But one week later the FPC repeated itself: all told there have been four votes, each time a 3-3 tie.

By then Brunson was nearing retirement, so the FPC chose a second acting police chief, Jeffrey Norman, who will serve until a permanent choice for chief is made. Norman is a 24-year-veteran of the Milwaukee Police Department who had risen to assistant police chief.

Meanwhile, Barrett appointed Amanda Avalos to the Fire & Police Commission, who could have provided a tie-breaking vote in the stalemate over who to pick as permanent chief. But the FPC, which is short-staffed and lost its executive director months ago, screwed up and didn’t do the required background check on Avalos. So the Common Council had to delay voting on her appointment.

Which was probably welcome news to the council, whose members weren’t excited about having a green newcomer to the FPC make such an important decision as who should be the next police chief. The council, Bauman notes, is not required to vote on Avalos appointment at the next meeting. Don’t be surprised if it continues to delay the decision.

Bauman, along with council members Ashanti Hamilton, Chantia Lewis and Michael Murphy have all suggested the FPC “pause” its search for police chief and give Norman some months to prove he can handle the job. All of them have a high opinion of Norman. “Frankly, I was surprised he was not selected as one of the finalists for the position,” Hamilton wrote in a press release.

Interestingly the FPC members voted unanimously by voice vote to appoint Norman as acting chief, yet they didn’t include him among the three finalists for chief. Barrett, too, offered a ringing endorsement of Norman, saying “I have extreme confidence in Chief Norman.” Meaning the mayor, too, may like the idea of Norman getting some months to prove he can handle the top job.

Council members have long wanted more control over the hiring and firing of the police chief, and that frustration has increased in the last year or two as the FPC has had one problem after another. The highly regarded attorney Leon W. Todd, III is now taking over as FPC executive director, and many have high hopes for him. But while the executive director oversees the commission and runs the office, he has no vote on the commission. And Todd is likely to be busy for some time trying to rebuild his staff. It could take him another year — if he’s lucky — to right the ship at the FPC.

Which could leave an opening for the council — depending on how many of its members support Norman — to effectively choose the next chief.