Massive delays in claims, duplicate payments and an unreliable call center among issues found in report. 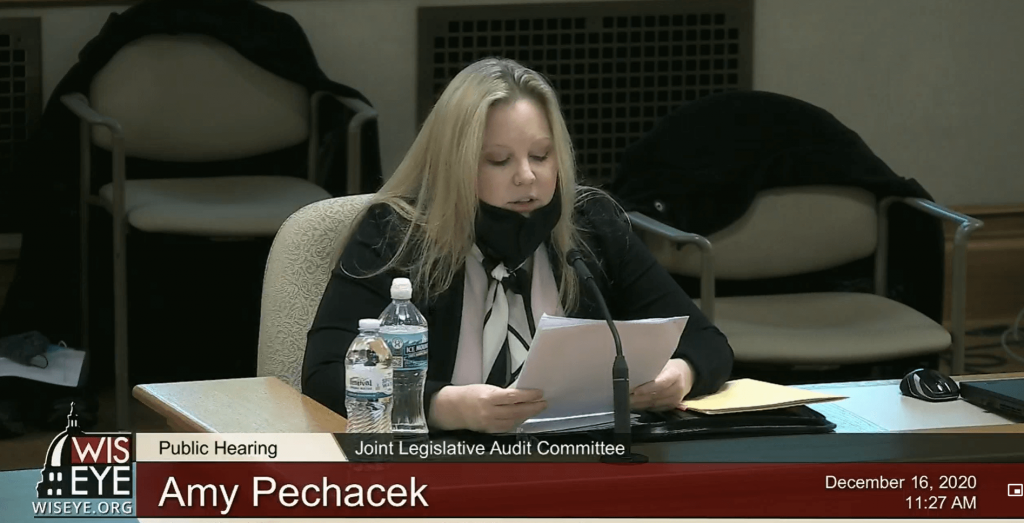 Tens of thousands of people who have been waiting on their unemployment insurance claims may learn by the end of the year whether they will get paid and start receiving funds, the acting head of the state’s labor department told lawmakers Wednesday.

Currently there are about 35,000 who have had to wait longer than three weeks to learn whether their unemployment claims will be accepted, Amy Pechacek, transition director for the Department of Workforce Development (DWD), told members of the Joint Legislative Audit Committee. “Our intention is to have all claims that are older than 21 days fully resolved or actively in process by the end of the year,” Pechacek said.

Pechacek took office in late September after Gov. Tony Evers fired DWD Secretary Caleb Frostman because of a festering backlog of UI claims that began early in the COVID-19 pandemic. The interim DWD head was a central witness during a hearing Wednesday to review three reports by the Legislative Audit Bureau examining the unemployment insurance (UI) program.

In an awkward moment during the hearing, Sen. Alberta Darling (R-River Hills) appeared not to remember that Frostman was no longer in charge, asking why “the secretary” was not at the hearing. After a brief pause, Rep. Samantha Kerkman (R-Salem), who led the hearing as the audit committee co-chair, restated that Pechacek was there as the DWD transition director.

Amid the record hundreds of thousands of people filing unemployment claims since the pandemic, tens of thousands have encountered delays in getting their claims approved and receiving their funds.

“All of us as legislators have been besieged by literally thousands of phone calls from constituents,” said Sen. Robert Cowles (R-Green Bay), the joint audit committee co-chair, at the start of the hearing. “But today I hope we can shed light on exactly where we are at — how do we get out of this mess?”

That very first week saw Wisconsin’s initial UI claims hit their peak, at 111,000, she said. By contrast, in the Great Recession that started in December 2007, initial UI claims peaked at one-third of that number, 36,000 — but that didn’t happen until more than two years later, in January 2010.

Weekly claims — those filed in the weeks after people make their first claims — reached a peak of 321,000 less than six weeks into the pandemic’s UI surge. The Great Recession’s weekly claims peak of 195,000 was about two-thirds of that; it also didn’t come until January 2010.

“While DWD had in place both a ‘surge plan’ to respond to seasonal spikes in claims and a ‘recession plan’ to respond to large, yet typically gradual increases in claims — similar to that seen in the Great Recession — neither were sufficient nor predictive to deal with the unprecedented number of UI claims being filed in such an extraordinarily short period of time,” Pechacek said.

Those numbers were complicated by changes that came with the federal coronavirus relief legislation as well as the state’s COVID-19 relief bill — both in the administration of UI and in incorporating new federal supplemental unemployment benefit programs, she added.

The first of three reports discussed Wednesday was issued in July and examined overpayments and underpayments of claims that took place in late April. Those resulted from a programming error related to the implementation of the temporary federal $600 supplemental unemployment pay, and the error has been corrected, said Tom McHugh, director of the DWD Bureau of Tax and Accounting.

A total of $19.6 million in duplicate payments was made, but the state was able to reverse most of that before recipients received the money. A total of $2.4 million was overpaid to 3,980 people, who have been notified to pay the money back; $986,592 has been sent to 3,354 people who were underpaid.

A second scathing report, in September, looked at call center performance from March 15 through June 30.

The call center report found that in the time period studied, just one-half of 1% of the calls made to the UI phone lines got through; while the rest got a busy signal or were blocked because phone queues were full.

Those phone calls represented only a fraction of new claims, most of which were required to be filed online. They also included calls from people who had filed claims online but were calling with questions about the process or to follow up on the processing of their claims.

DWD contracted with call center providers to accommodate the additional volume during that period. Pechacek says DWD is still averaging more than 50,000 calls a week, but that call center wait times have fallen to less than a minute with one contractor and less than five minutes for another.

The most recent of the three Legislative Audit Bureau reports discussed Wednesday was released on Monday. That report focused on delays in how claims were processed.

From March 15 through October 10, DWD paid first-time claims for 74.5% of the 662,731 unemployed people who filed them, according to the audit report, leaving claims unpaid for 25.5% — 169,277 people. The unpaid people included those whose claims were still pending, those who had been denied and those who had withdrawn their claims.

Of the first-time claims that were paid, 53% were paid in two weeks or less, while 24.7% took more than five weeks to be paid, according to the report. From late March and early April — when it took nearly 40 days on average for people to get their initial claims paid — payment times improved dramatically by the end of August, falling to 8.5 days on average.

In the March 15-Oct. 10 period, the initial claims of more than three out of four people went to adjudication to determine their eligibility: 77.6%, or 514,026 people. As of Oct. 10, nearly 19% of those people’s initial claims were still in adjudication, the report states.

The crush of applications was exacerbated by technology that she called “antiquated” and inefficient at entering information from unemployment claims, she added, as well as the time required to include the additional federal benefit programs.

A complicated application form — which the agency now is revising to make it easier to understand — also has added to the problem, she said. The new application is meant to help applicants make fewer errors that send their cases to adjudication.

Legislators’ views of the problem divided along partisan lines. The Republican majority took the Evers administration to task for not taking up a Republican proposal in July to use some of the state’s federal allotment of coronavirus aid money to make short-term loans to pending UI applicants, not beefing up the workforce handling UI claims fast enough and not requiring that workforce to put in longer hours.

“I would just encourage you to say, ‘Hey, we may need to step these hours up,” Sen. Chris Kapenga (R-Delafield) told Pechacek. “Even if it’s 50 hours, when we have people who are not able to make their rent — and we’ve got calls from people that are in that situation that can’t pay their mortgage — it’s incumbent upon us, and it’s incumbent upon you, to say, ‘Team, we got to step up here until we get on top of it.’”

Democrats focused on longstanding complaints that an old computer system contributed to the delays in processing claims, raised the issue of Republican-led changes over the last decade that have put roadblocks in the way of unemployment claims, and the Republican legislative leaders’ refusal to convene the Legislature since April 15, when lawmakers last met to approve the only legislation to date addressing the pandemic.

“We’re eight months [in] when we’ve not been in session, when we could do something,” said Sen. Tim Carpenter (D-Milwaukee).

“COVID sucks — it’s just plain bad,” said Bewley, who attributed to the pandemic’s disruption the “desire to blame the inability to deal with it” on a particular target. “Hindsight is 20/20,” she added. “But hindsight that is armed to the teeth and focused on finding someone to blame, I think, serves us less than using this information to do a better job to serve the people of Wisconsin.”

For the most part, however, committee members talked past each other, at times arguing when it came their turn to speak.

After Carpenter criticized the Republican lawmakers as well as the administration of former Gov. Scott Walker for not taking steps years ago to upgrade the computers, Kapenga, along with Rep. John Macco (R-Ledgeview), largely dismissed the computer system’s age as a significant factor.

Addressing Carpenter’s complaint about the Legislature’s failure to meet, Mark Born (R-Beaver Dam) retorted that the auditors’ recommendations had focused on “staffing and processing issues” that required no changes in state law. “Of course the Legislature wouldn’t meet to fix leadership and process changes,” he added.

When it came to adjudication, Kapenga, Macco and Born all focused on staffing. But Rep. Katrina Shankland (D-Stevens Point) asked why more than three out of four initial claims were going to adjudication in the first place.

“That struck me as a high number,” Shankland told State Auditor Joe Chrisman and Dean Swenson, the deputy state auditor for performance evaluation. She asked whether they had compared Wisconsin’s adjudication times and the percentage of claims needing adjudication with other states. Chrisman replied that was not included in the audit’s scope.

“It would behoove this committee to ask for an audit related to the cause for and time to adjudication,” Shankland said. “A greater issue that we all need to look at closely is what state laws are on the books that require the DWD to follow certain protocols that do add potentially weeks — or even months — to the process.”